Pompeii — the Roman town that was buried by an eruption of Mt. Vesuvius in 79 A.D. — continues to tell us some interesting stuff about the everyday lives of the ancient Romans. Excavations have uncovered apparent brothels, bars, homes — and now, a fast food stand, pictured above, that was operating on a busy street corner.

The fast food stand evidently was closed in a hurry as the volcano spewed the ash that buried the town. Archaeologists found the remains of that fateful day’s offerings in some of the pots embedded in the brightly colored food stand. The menu when the volcano blew included duck, pig, goat, snails, fish, fava beans, and a paella-like combo dish. And from that chicken that is painted on the front of the stand, I’m guessing that everybody’s favorite poultry was in one of those pots from time to time, too.

The excavation also uncovered a scenario that might be familiar to modern fast-food stand operators. The remains of a person who was lifting the lid on one of the pots of food were also uncovered — leading archaeologists to speculate that somebody fleeing the eruption couldn’t resist stopping to grab some free food when they should have kept running.

The ancient Romans seem like they were a lot like us, suggesting that the basic motivations of people — and the key concepts of point of purchase advertising that attracts them — haven’t changed that much over thousands of years. The brilliantly decorated food stand, obviously calculated to catch the eye of passersby, with the no doubt delectable smell of simmering food, looks like a modern food truck or an open-air food stand on the street of New York City. The pork, chicken, and fish that was served would be at home in any modern fast-food outlet, too. The only thing that appears to be missing from the Roman stand is a dirty water hot dog.

In 79 AD, Mount Vesuvius erupted, burying nearby Pompeii — a thriving Roman village during the height of the Roman Empire — killing the inhabitants, and covering the town in a thick and deep coating of volcanic ash. 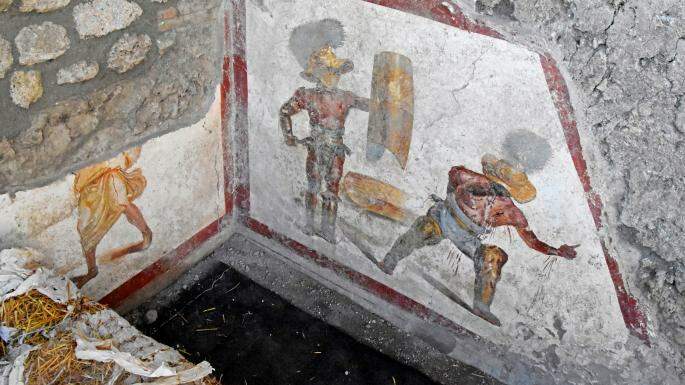 Hidden under its ashy cloak, Pompeii lay undisturbed, and forgotten, for hundreds of years.  The blanket of ash had the effect of preserving the town as it existed on the date of the eruption.  Excavation of the site at Pompeii didn’t begin until the mid-1700s, and continued haphazardly until the mid-1800s, when systemic, organized preservation efforts began and Pompeii became known as a unique opportunity to get a glimpse of what everyday life was like during the heyday of Rome.

Interestingly, Pompeii is still disclosing her secrets.  A huge, hundred million dollar preservation, restoration, and excavation project is underway at the site, which is aimed at repairing the parts of Pompeii that were crumbling and making new discoveries.  And new discoveries have been made, including uncovering an inscription that helps archaeologists better date the eruption of the volcano, a tavern with a vivid fresco of a bloody but victorious gladiator, and other colorful paintings and decorations.  And there are still areas that remain unexplored where the preservationists hope that excavations will yield additional surprises.

We visited Pompeii on our trip to Italy years ago.  It was a hot day, we stupidly did not bring bottled water with us for the visit, and the combination of broiling temperatures and the volcanic dust that still is found at the site made that day the thirstiest day I think I’ve ever experienced.  Still, it was fascinating to get that peek at life in the distant past.  With new discoveries being made, it may be time to make another visit to the town that time forgot. 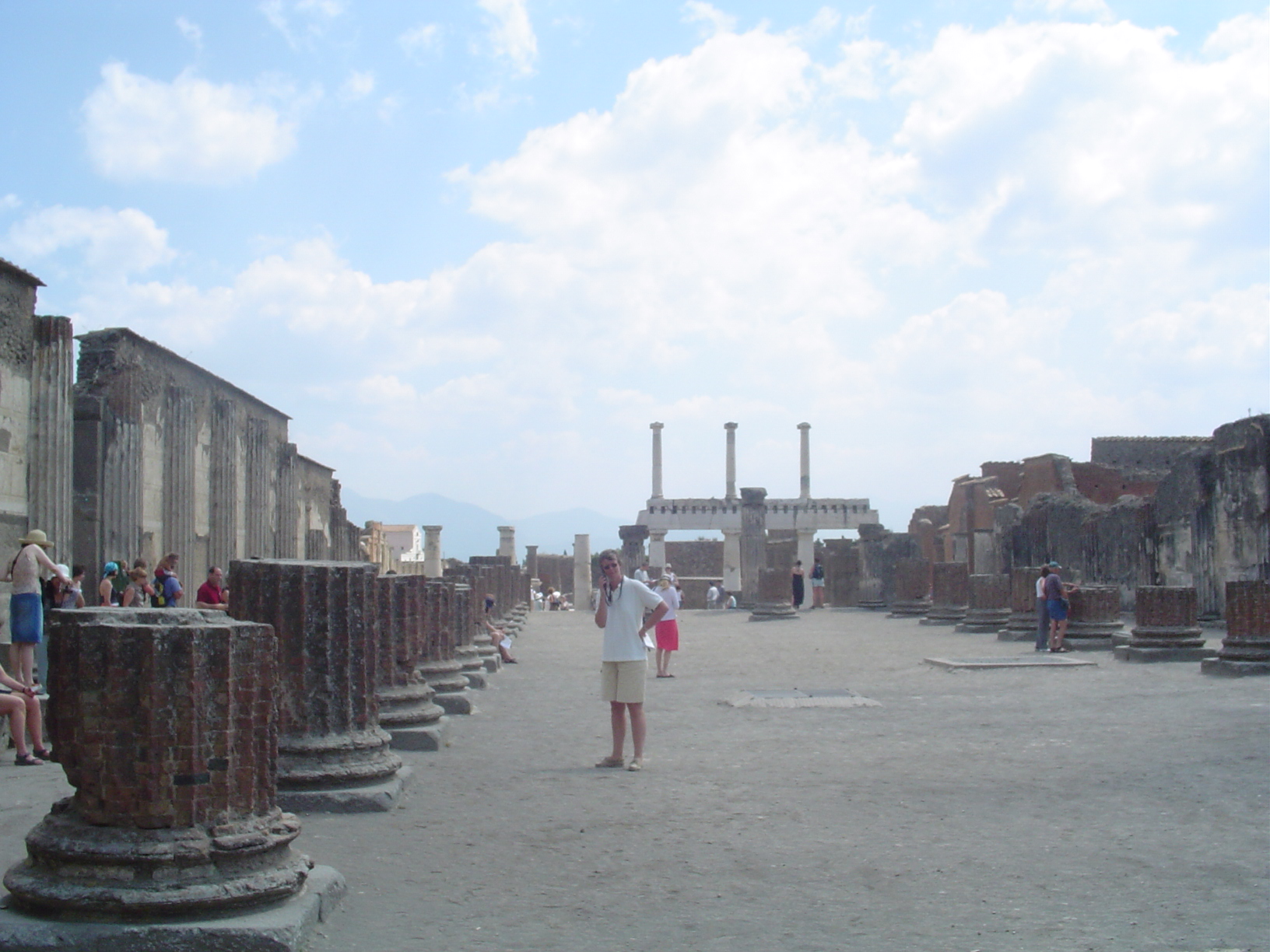 Walking among the ruins at Pompeii

Our last full day in Italy began with a standard European breakfast at our hotel in Sorrento. It was another hot, brilliantly sunny day. The weather during our trip has been a bit hotter than we would choose, but we can’t complain about rain or the lack of sunshine. In the 11 days of our trip so far, we’ve had rain in only part of one day, as we drove into Orvieto. Other than that, the weather has been consistently sunny, bright, and clear, often with cloudless blue skies.

We lugged our suitcases up the steps at the parking garage at Sorrento, fit them into the trunk of the Opel Electra, and headed off to Pompeii. Initially, we had some winding roads, and I think we all groaned inwardly at the thought that we might have to recreate yesterday’s journey along part of the Amalfi coast. Fortunately, the fear was unfounded, and the road turned inland and straightened out somewhat. We reached Pompeii after traveling through some of the most uninspiring Italian landscape we have seen on our trip. The area right around the Pompeii excavations were like an Italian Morse Road. We pulled off and left our car at an attended lot. The attendant spoke virtually no English, but through sign language communicated where we were to park and that we were to leave our car unlocked, with the key inside. This time, we agreed, although still with some trepidation. There didn’t seem to be much choice if we wanted to see the ruins.

The Pompeii ruins don’t seem like much from the outside, or even as you initially enter. Soon, however, you realize two things. First, the ruins are far vaster than you would expect, extending across significant parts of the countryside. Second, the ruins are much better preserved than the ruins in, say, the Colisseum or the Forum. As a result, you soon begin to feel you are getting a better sense of what Roman life was actually like. A complete gladiator arena, theatres, houses, public areas, shops, and signs survived the ash that spewed from Mt. Vesuvius. Many of the houses had ornate tile designs in the floors and painted walls — with yellow and rust apparently being the preferred color scheme. It is impossible not to feel that life in Pompeii before the eruption in 79 A.D. was lively and colorful.

However, it also is difficult not to be somewhat curious about Pompeii. How could it have stayed under its blanket of ash for so long without being disturbed or looted? The Romans didn’t seem shy about reusing old buildings — why not just clean off the ash and revive the town? Also, you can’t help idly wondering if some of the better preserved paintings weren’t recently added to enhance the viewing experience. In any case, Pompeii was quite interesting. Unfortunately, we saw it during the middle of the day, with crowds of other tourists. As a result of the hot and dry conditions, the ash, and the excavations, walking caused clouds of dust, and after a few hours we were all very thirsty. So, we left parts of the site unexplored and headed back to the car. After a quick bite of pizza at a nearby restaurant — and some much needed water and sodas — we retrieved our car (which was undisturbed) and headed back to Rome.

The drive back to Rome was uneventful. The roads became more crowded as we approached Rome, and even more so after we left the Autostrade and turned onto the “ring road” that encircles Rome. The exist for the airport was well-marked, however, and we found the airport Hilton without much trouble. Finding the Avis drop-off point was much more difficult, because there were virtually no signs showing the location of the drop-off point. After some driving around, and some cursing on my part, Richard and I found the Avis drop-off, which was on the fourth floor of a parking garage. Although I enjoyed driving, it felt good to be free of the car and to have successfully completed the driving part of the trip without an incident.

During our initial 3 days in Rome, we decided we should come back to stay at the aiport Hilton, rather than driving back into Rome itself and taking a long cab ride to the airport. I think it was a good decision. The traffic in Rome is unnerving, and we would have had to get up very early to make the flight. That said, the airport Hilton is a standard, soulless airport hotel with prices that gouge the traveler at every opportunity. Our dinner there was pathetic — the food came at different times, and one of our orders was simply forgotten. It cost about $20 for a cheeseburger and fries. However, Kish did get two excellent Cosmopolitans to help calm her nerves for the flight. After dinner, we walked to the airport, where Richard hoped to find the new Harry Potter book that he needs to read over the summer. No luck on that score. But, it felt smart to scout out the aiport before our departure tomorrow.

It’s been a fun and interesting two weeks of travel in Italy, but I think Kish and the boys (and me, too) are ready to get back home. As the end of a vacation approaches, the momentum to get home becomes irresistible, like a boulder rolling downhill. If we could have gotten a flight tonight, and thereby gotten home a few hours earlier and avoided our last night’s stay at the airport Hilton, I’m sure we would have voted unanimously to do so.