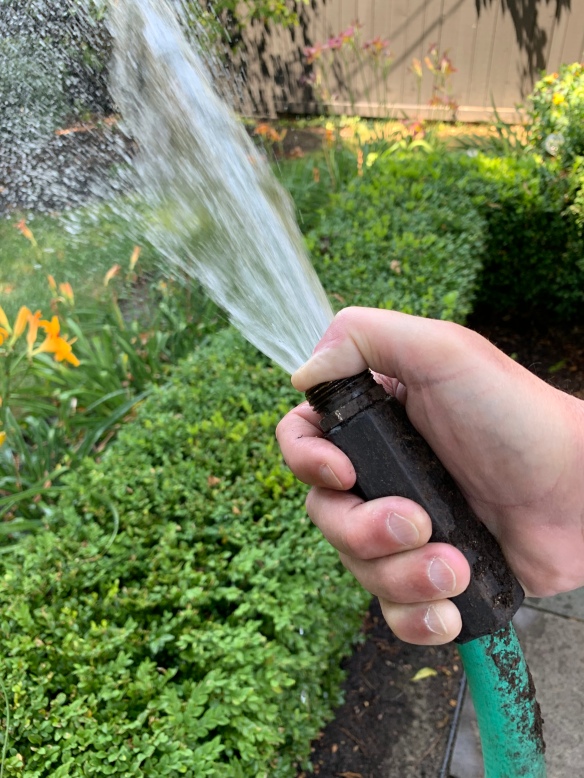 Why do opposable thumbs exist in humans and other primates?  Scientists generally agree that the appearance of the opposable thumb was a key evolutionary point in the development of our species.  It is what allowed primates to grip and climb and move into the trees, away from the realm of large predators looking for a meal.  Opposable thumbs also proved to be pretty handy from a toolmaking and tool using perspective, whether the tool was a stick to be manipulated or a rudimentary axe.

All of this is true,  Curiously, however, scientists haven’t fully explored whether the opposable thumb was developed in anticipation that modern humans who are too cheap to buy a nozzle for their garden hose might need the thumb to water their yard and plants on a beastly hot summer day.  Sure, the opposable thumb might not have been evolved specifically for watering and hose wielding, but it sure works well for that purpose — whether you want to generate a gentle sprinkle or a high velocity jet to reach the side of the yard beyond the length of the hose.

How do we know for sure that our distant ancestors weren’t big on watering?

Scientists have completed a study that suggests that great apes, like their human cousins, have “mid-life crises.”  The study found that well-being in orangutans and chimpanzees follows a U-shaped curve also found in humans, starting high in youth, dipping low during middle age, and then climbing again in old age.

In a ground-breaking effort, researchers were able to interview middle-aged apes who had learned American sign language in an attempt to determine the cause of their vague feelings of dissatisfaction.  One fidgety female chimp, for example, complained incessantly of feeling bloated and repeatedly adjusted the thermostat in the room during the interview process.

A Silverback with poorly dyed back fur explained that, after years of rooting for grubs and berries and grooming other members of his gorilla community, he was seeing no end in sight.  He had grown tired of constantly having to establish his dominance over younger apes, he added, was bored with his daily routine, and had begun to wonder whether there was anything else to his life. The revealing interview was cut short when another researcher mistakenly brought a young female gorilla into the room, causing the Silverback to suck in his gut, beat his chest, and lose interest in further communications.