I took a friend to his first-ever game at the Ohio Stadium today.  He got to see the Buckeyes beat up on a hapless Kent State team, 66-0, and was introduced to all of the great traditions that surround Ohio State football.

Although he was impressed by the football team’s score, what really blew him away was The Best Damn Band In The Land.  It was alumni band weekend, and 800 of the former members of TBDBITL returned for a chance to march and play on hallowed ground once more.  When they marched in before the start of the game, the alumni bandies covered the entire field.  And whew!  What a massive, colossal sound when about a thousand brass instruments and drums start to play I Want To Go Back To Ohio State in unison!

The band’s show ended with the quadruple Script Ohio — three of which were performed by alumni band members.  When the 4 “i”s got dotted and the sousaphone players bowed to the crowd, the place went up for grabs.

Here’s a sign of how much Ohio State fans like their band.  At halftime, people actually stay in their seats to watch the band’s show.  It’s only in the few minutes between the end of the band’s show and the start of the second half that there’s a mad stampede for the bathrooms. 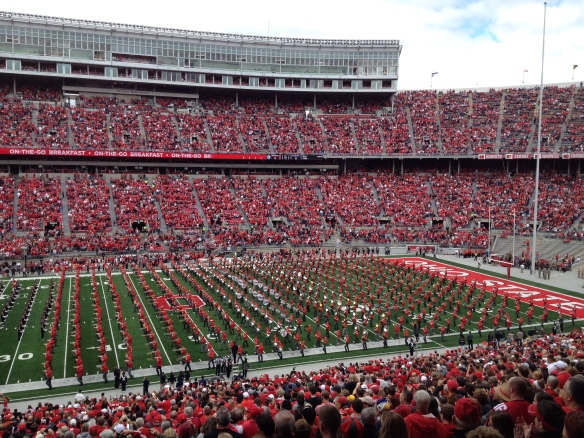