If you’ve got a trip to Europe on your “bucket list,” you might want to go for it now.  For Americans, travel in France, Germany, Italy, and the other members of the Eurozone will be as cheap as it has been in years — for the next few months, at least. 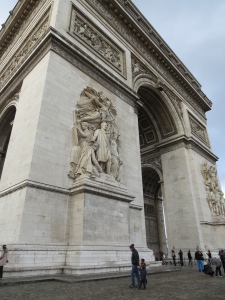 The value of the Euro — the collective currency of the Eurozone — has been in free fall against the American dollar over the past few months.  On Friday, the Euro fell to $1.12, which is its lowest level in 11 years.  That’s a very sharp decline from earlier in the year, when the Euro was trading at around $1.40.

European economies are weak, and the European Central Bank has announced that it will be engaged in a “quantitative easing” program that will seek to expand the money supply — and, inevitably, have an inflationary impact — in an effort to spur economic growth.  And because the ECB has just announced its program, and it will take some time for all of the details to be absorbed by the financial markets, we can expect the value of the Euro to continue to fall against the dollar in the near future.

All of this is good news for Americans who are interested in visiting Europe.  Because the  Federal Reserve Board has already completed the quantitative easing program in the U.S. and has announced that it will be raising interest rates in the near future, the dollar should remain very strong against the Euro.  That means American tourist dollars will get better exchange rates at currency stores and will have more buying power on the streets of Paris and Rome — which will bring down the real cost of lodging, meals and museum fees.

Couple that with the ever-present European interest in encouraging tourism, and it’s not hard to forecast that bargain-hunting U.S. travelers will have a field day in 2015.

The Federal Reserve Board has announced that it is ending its Quantitative Easing (QE) program.  Monetary policy and Wall Street finance decisions like this one typically make the average person roll their eyes and groan about abstract concepts that don’t seem to affect them — that is, until the failure of poorly conceived financial instruments threaten to bring the American economy to its knees and produce a recession or depression.

So what is QE, exactly?  It began in 2008 and was designed to try to bolster the sagging economy by injecting money and increasing the availability of credit.  A helpful New York Times piece explains QE using charts.  They show that for the last six years, the Fed has been buying bonds — lots and lots of bonds, to the point where it now owns $4.8 trillion of them.  And it hasn’t limited its bond buying to its traditional market of presumptively safe U.S. treasury securities, either.  Instead, it has bought huge sums of mortgage-backed securities, too, to the point where about 40 percent of the Fed’s total portfolio consists of those instruments.  And although the Fed has announced that QE is ending, that really just means that the Fed has stopped buying.  It has no plans to do any selling and will continue to own and hold that $4.8 trillion of bonds.

Why should we care about any of this?  Some people say that, through QE, the Fed just created money out of thin air.  Of course, it has been decades since the “gold standard” applied and dollars could be exchanged for actual gold, and since then dollars and other currencies basically have only had the value that investor confidence places in them.  During the six years of QE bond-buying, inflation has remained under control.  And, in some respects, QE seems to have worked — borrowing costs have declined, the stock market has bounced back, and there has been some job growth since the dark days of 2008-2009, although the economy obviously remains weak.

My views about QE boil down to two thoughts.  First, QE illustrates the enormous extent to which our current form of government places a lot of trust and power in institutions like the Fed.  How would the Founding Fathers react to an unelected board independently making the decision to buy trillions of dollars of financial instruments as part of a specific effort to manipulate the economy?  Second, QE also reveals the puniness of the average American in the face of massive economic forces that are wholly beyond our control.

Many of us have tried to manage our personal financial affairs prudently, with an eye toward building a nest egg that will allow us to some day enjoy a comfortable retirement.  We are like the ants in the tale of the ant and the grasshopper, toiling and husbanding a portion of our earnings while the grasshoppers among us fiddle in the summer sun.  The risk for those of us who are following the path of the ant is that inflation begins to erode the value of what we’ve saved and reduced its ability to allow us to enjoy our golden years.  Has QE increased that risk?  So far it apparently hasn’t, but the jury is still out.  Like ants, we just hope that we don’t get crushed.