A homeowner who lived near Abilene, Texas was experiencing some trouble with his cable TV feed after the area experienced some high winds, so he crawled into the space under his house to check his connections.  That turned out to be a mistake.  When the homeowner saw “a few” snakes in the crawlspace, he beat a hasty retreat, decided he needed professional help, and called Big Country Snake Removal. 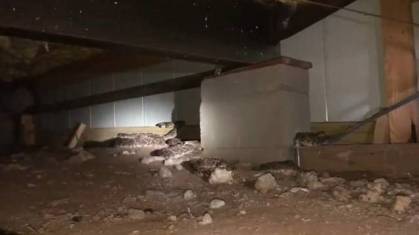 When the snake removal crew arrived and went under the house, it found 45 — 45! — rattlesnakes cozily curled up in the crawlspace under the home, which the snakes apparently found to be a safe and agreeable place to live.  A creepy video shows the Snake Removal crew lassoing the snakes with an extendable device, causing the snakes to hiss, shake their rattles, and expose their fangs.  The largest rattler was five and a half feet long — which seems like a pretty big damned snake to me.  The owner of Big Country Snake Removal, though, says the snake infestation wasn’t unusual, and “We do this all the time.”  (Sounds like an interesting place to work, doesn’t it?)

45 snakes under one house?  It sounds like a bad Samuel L. Jackson movie.  How many rattlesnakes are there in rural Texas, anyway?  If you were the homeowner, would you continue to live in the house, knowing that rattlers clearly love to camp out, by the dozens, in the crawlspace?  At the very least, I think I’d be investing in some of that “snake-proof fencing,” just in case.