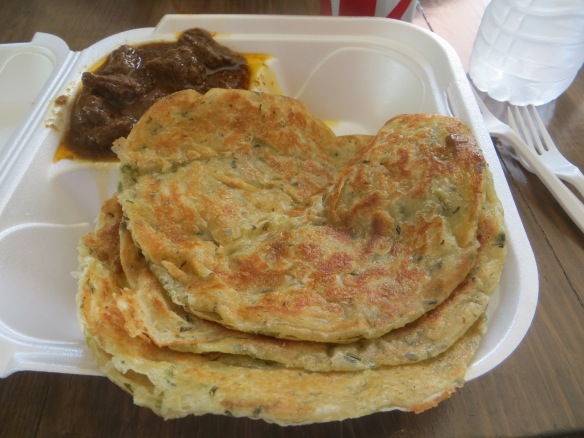 Last week I took Kish to Dinin’ Hall for the first time, and already she’s hooked.  Today we again headed to the Hall, where we had the good fortune to find Aromaku — another one of many great food trucks found in our fair city.

Aromaku serves Indonesian food, and it’s fantastic!  I ordered the Rendang Prada, which apparently is a traditional Indonesian dish.  It was so good that it made me wish that I was raised in an Indonesian family.

Rendang is a beef stew — rich, dark, and full of spices and dripping chunks of beef in a succulent gravy.  It’s served with Prada, which is a chewy kind of roti bread.  You spoon the rendang onto the prada, roll it up, and eat it like an egg roll.  At least, that’s how I gobbled it down in an embarrassing display of gluttony. 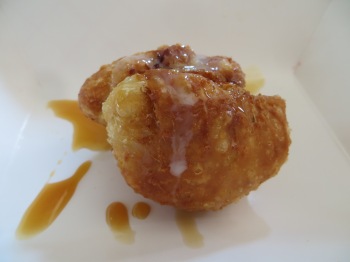 Rendang prada is one of those dishes that Food Network shows would say reflects Indonesia’s mix of cultures and influences from neighboring lands.  If so, it’s an awfully good mix.  I loved the taste, and also loved that the dish was served piping hot — so hot, in fact, that the prada left a mark on the stryofoam container it was served in.  Having the prada also allowed me to greedily mop up every last drop of that awesome rendang gravy.

Kish got the bakmi ayam, a dish of noodles and minced chicken, and loved it.  We also tried the Indo-Dutch ball — no doubt the authentic,native Indonesian name for the dessert — that was a kind of pastry filled with cheese.  It also was terrific.

Not surprisingly, Kish wants to make our Dinin’ Hall lunches a weekly feature.  Why not?  There’s lots of food left to discover.