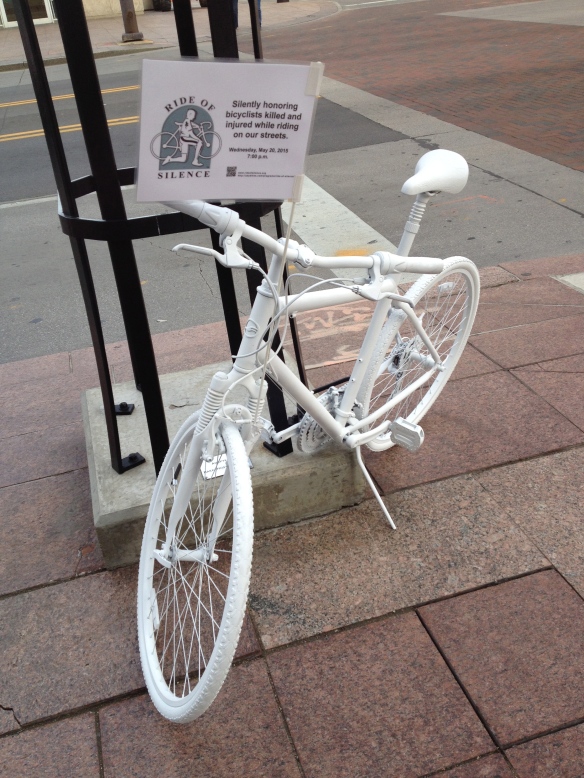 At the corner of Broad and State Street in downtown Columbus, a bright white bicycle stands.  And it’s not just the frame that is white.  The spokes of the wheels, the tires, the seat, the handlebars and grips, and even the kickstand are painted the same brilliant white.  The result is a bicycle that is so white it stands out sharply against the asphalt pavement and stone sidewalks and immediately attracts the eye of the passerby.

That is the whole idea. The bike is called a ghost bicycle, and it was put at the location by Ride of Silence, a group that exists to call attention to the number of cyclists who are killed or injured while riding their bicycles on public roadways.  This year the ride of silence will occur in Columbus and at other locations in North America on May 20.  There is no charge for riding.  Organizers ask participants simply to ride at no more than 12 miles per hour, wear helmets, follow the rules of the road, and maintain silence during the ride.

Interesting, isn’t it, that people whose first vehicle operated on a road probably is the bicycle they had as a kid can grow up to be motorists who seemingly are oblivious to the right of cyclists to share the street.  A nice person I knew was killed recently while cycling, and my friend the Biking Brewer has often mentioned that riding your bicycle on a public street can be a dangerous proposition.  If the Ride of Silence and its ghost bicycles can raise awareness of the need to be mindful of bicycles on our road, it’s doing a good thing.