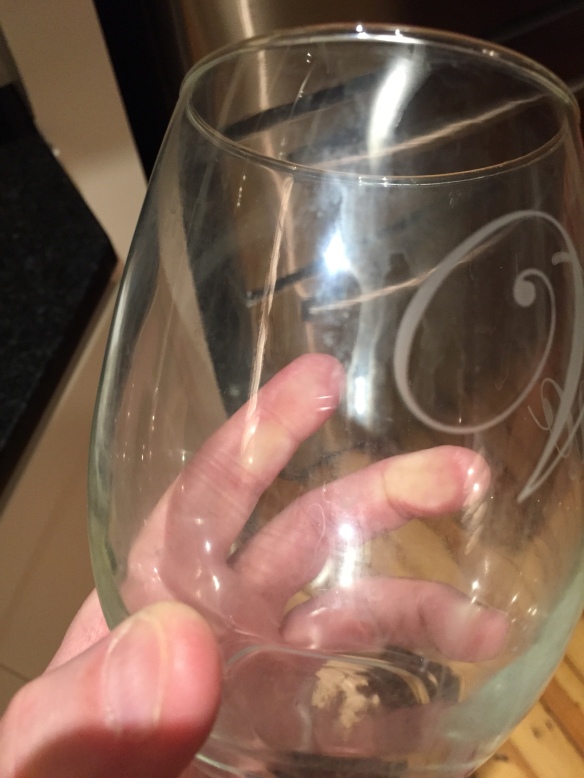 Have you ever felt like you’re reenacting a TV commercial in which you’re the baffled consumer unable to resolve a curious household problem?

Frustrated woman with haunted look as she hears mocking taunts of “ring around the collar!”: “I’ve tried scrubbing them out, and soaking them out, but nothing seems to work!”

Embarrassed woman who sees a cloud of gas with images of dogs and babies in diapers inside lingering in her living room as she prepares for guests: “What can I do to give my house that clean, fresh scent?”

Mystified Webners: “The glasses that come out of our dishwasher seem to be coated with some thin kind of film. How can we eliminate the scourge of cloudy glasses and make our glasses sparkling clean?”

In the commercials, at this point some officious busybody named Madge shows up and gives the answer that allows the grateful consumer to solve the problem of ring around the collar or reeking rooms. So far, though, no complete stranger, genie, or disembodied voice has provided us with guidance on resolving the cloudy glass conundrum, and none of the additives, rinses, or other commercial products we’ve tried have done the trick.

This isn’t an earthshaking problem, of course, but it would be nice to have glasses that are transparent. And while we could pre-wash or post-wash them, that defeats the point of a dishwasher, doesn’t it?

I guess all we can do is cast our gaze skyward, say “what’s a troubled dishwasher owner to do?,” and hope for the best.

To a young boy growing up during the ’60s, the life of a housewife as shown on TV seemed full of curious challenges and potential disasters.  So many crucial product decisions to be made!  Which floor wax was most likely to seal against black heel marks?  How could you keep that “fresh as a daisy” scent in your home, even with smelly husbands and children around?  And, perhaps most importantly, which detergent could avoid the dreaded cry of “ring around the collar”?

Of the awful humiliations that could befall a loving wife, “ring around the collar” was the worst.  She could be packing a suitcase, or happily enjoying a cruise with her husband, when the suitcase, or the cruise director, or countless other buttinskys would bray “ring around the collar!”  And then all attention would focus on the grimy markings on the inside of the husband’s white shirt collar, and the wife would shrivel with embarrassment.  She’d tried soaking them out and scrubbing them out — but nothing worked!  You couldn’t help but identify with her feelings of horror, shame, and frustration.

Why wasn’t this the husband’s fault?  After all, he must have been a sweaty slob who couldn’t keep his neck clean, even while working a cushy white-collar job.  Such questions were not even acknowledged, much less answered, for boys trying to understand the mysterious ways of grown-ups.  What was clear, instead, was that “ring around the collar” was to be avoided at all costs — and Wisk could help.

Eventually I started wearing white-collared shirts, and at some point, I realized that I was not experiencing ring around the collar.  In fact, the insides of my collars didn’t seem to get dirty at all.  Collar buttons occasionally fell off, and ties could get stained during lunch — but the collars remained pristine.  And apparently I wasn’t alone in that experience.  You just didn’t see “ring around the collar” commercials anymore, either.