Ringo Starr is coming out with his 20th solo album, called What’s My Name, next month.  The album will feature an intriguing track for the Beatles fans among us. 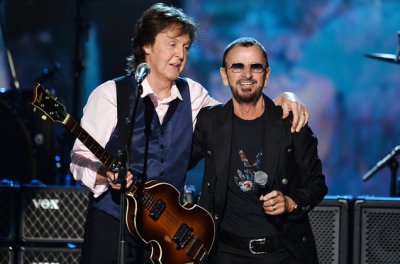 Sir Ringo will be singing a song written by John Lennon shortly before his death. The song, called Grow Old With Me, was recorded by Lennon on demo tapes for Double Fantasy, Lennon’s last album.  When a record producer played the song for Ringo, who had never heard it before, he was touched by it and decided to record it — and he asked Paul McCartney to play bass and sing back-up.  Sir Paul agreed, so the two surviving Beatles perform together again, on a song written by a third Beatle that includes a string arrangement that quotes from Here Comes The Sun, written by the fourth Beatle, George Harrison.  Ringo’s new album also will feature a cover of the song Money, which the Beatles also recorded and performed.

I’ll be interested in hearing the song, which is as close as we’re going to get to a Beatles reunion these days.  I also think it is pretty cool that Ringo, who is 79, and Paul, who is 77, are still active in performing and recording — and are thinking from time to time about their days in the Beatles and their now-departed bandmates in the greatest musical group ever assembled.

Recently I stumbled across this article about Paul McCartney, the bass player.  It’s based on an interview of McCartney that occurred in November 1994, conducted as part of the research for a publication called The Bass Book.  The interview — which focuses on how McCartney became a bass player, the instruments he used, including the famous violin-shaped Hofner, and other musicianship basics — wasn’t published until this year. 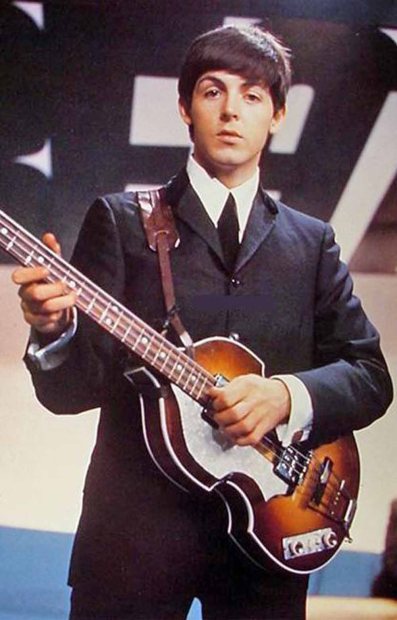 It’s a fascinating read, and it highlights a point that often gets overlooked:  the incredible musical talent that was packed into the four people who made up the Beatles.  Sometimes the band’s legendary, overwhelming celebrity overshadows the fact that they were all brilliant musicians.  I’ve written before about Ringo Starr’s exceptional drumming, and the underappreciated contribution he made to the underpinnings of the Beatles’s greatest songs.  Paul McCartney’s bass playing was no less phenomenal.  Together, McCartney and Starr gave the Beatles the greatest rhythm section in rock music history.  (And don’t let anybody dismiss George Harrison’s lead guitar work, or John Lennon’s rhythm guitar efforts, either — they’re equally outstanding.)

McCartney’s bass role in the Beatles was foisted upon him — somebody had to slug along on the bass after Stu Sutcliffe left the band — but he took to it like a duck to water and showed amazing creativity in devising bass lines for the band’s songs.  Listen, for example, to songs like Come Together or Something from the Abbey Road album (a song that also shows McCartney’s extraordinary gift for background vocals) and focus in on the bass playing.  You’ll come away shaking your head at the creativity McCartney shows, and thinking about how his playing just blows away the work of most bass players.  McCartney somehow devised bass lines that faithfully anchored the rhythm of the songs, but also advanced them musically — which is not a common ability.  And his bass skills didn’t end when the Beatles broke up, either.  Mrs. Vandebilt from Wings’ Band on the Run album also showcases McCartney’s bass capabilities and drives a song that irresistibly forces you to move with the beat.

We’ve heard recently about who’s a genius, and who isn’t.  Paul McCartney’s bass playing shows genius.  When you combine it with his songwriting ability, his singing ability, his guitar work, and his piano playing . . . well, it demonstrates what real genius is. 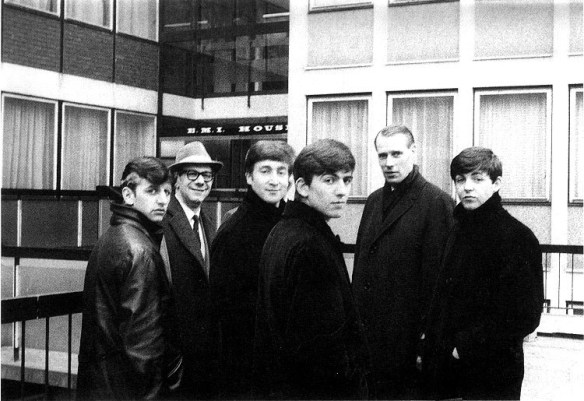 Sir George Martin died on Tuesday at age 90.  Though he had a long and accomplished career in music, he will forever be remembered as the Beatles’ producer — and therefore as a giant in the history of popular culture.

Martin’s first interactions with the Beatles are the stuff of music legend.  The Beatles, fresh from long stints in Hamburg clubs, had just experienced the departure of Stu Sutcliffe and had replaced Pete Best with Ringo Starr; their first efforts to get a recording contract had ended in failure.  Martin, a classically trained musician who studied piano and oboe, was working as a producer for the struggling Parlophone label, which specialized in classical music.  When Martin first listened to the Beatles’ music, he was not impressed — but there was something there, and Parlophone was desperate to break into the rock music market, so the band was signed. 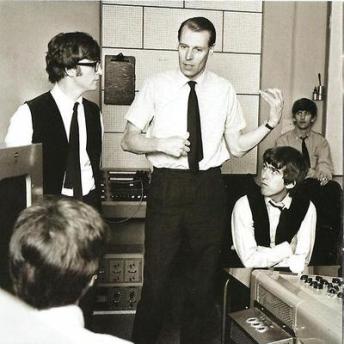 The rest, as they say, is history.  Martin struck up a good relationship with John Lennon, Paul McCartney, George Harrison, and Ringo Starr, and he respected the wishes of McCartney and Lennon to become real songwriters, not just performers.  He listened to their songs, made crucial suggestions, and Martin and the Beatles quickly developed a relationship of collaborative creativity that produced some of the greatest popular music ever recorded.

Please Please Me, the first album the Beatles recorded with Martin, is a terrific rock and roll album that captured an almost live music feel and showed Martin’s technical recording skills.  Listen to the irresistible Twist and Shout, with the band’s tight, chunking rhythms, John Lennon’s hoarse vocals, McCartney’s soaring screams, and Ringo’s ashcan drumming at the end, and you’ll hear a masterful exercise in recording.  From there, it was a line of hits that steadily and inexorably stretched, and stretched, and stretched the boundaries of popular music, with Martin suggesting strings here and a sitar there, speeding up sections of songs, recording feedback and backward music, and eventually producing the ground-breaking Sergeant Pepper’s Lonely Hearts Club Band album.  But while others might focus on the lushly produced songs, like Yesterday or Strawberry Fields Forever, we shouldn’t forget that Martin was brilliant at the basics and knew when avoiding a cloying, over-produced sound was just as important.  A Hard Day’s Night, from the taut opening guitar chord of that song to the end of the album, still remains one of the greatest rock albums ever released.

I’ve written often about music generally and the Beatles specifically.  They were extraordinary talents, but it was people like George Martin who helped them to produce magic and beauty, songs that touch you deeply and songs that make you want to dance in a sweaty crowd and songs that make even the vocally challenged among us want to sing out loud.  Sir George Martin was part of something tremendous that will live on for years.  He will be celebrated in his passing, and justifiably so.

On February 9, 1964, the British musical group The Beatles appeared on The Ed Sullivan Show. The buzz about the four lads from Liverpool was tremendous, and a record TV audience — 73 million people — tuned in to watch. For many people, watching that show, and then going out to buy their first Beatles album the next day, is something they’ll never forget. Some people think “the ’60s” really began with that one broadcast.

On Sunday, February 9, CBS will air a show commemorating the 50th anniversary of that broadcast. The show will feature a bunch of performances of Beatles songs by other artists — including Stevie Wonder, a reunited Eurythmics, Joe Walsh, Imagine Dragons, Maroon 5, Katy Perry, and George Harrison’s son Dhani Harrison, among others — followed by performances by the two surviving Beatles, Paul McCartney and Ringo Starr. The show closes with the two on stage together, performing A Little Help From My Friends from the Sgt. Pepper’s Lonely Hearts Club Band album and finally Hey Jude. I’ll be watching — in fact, I’d watch just to hear those two songs performed live by those two musicians.

When I read about the show, and noticed that the family members of John Lennon and George Harrison were in attendance, I found myself wondering what kinds of memories were reawakened in Starr and McCartney as they performed. A lot of water has passed under the bridge in the past 50 years. What was it like to remember that show half a century ago, when you were one of the four young men from England who suddenly and amazingly took America by storm?

The white suit that John Lennon wore on the cover of Abbey Road recently sold at auction for $46,000.  The two-piece suit, which had been made for Lennon by a French designer, was purchased by an on-line bidder who wanted to remain anonymous.  It is not clear whether the suit will end up in a museum or in some private collector’s basement. 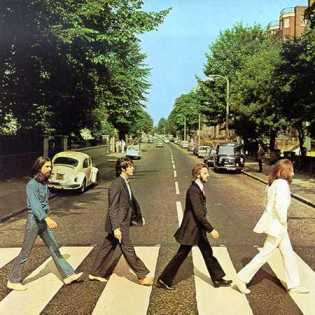 What is the value of this kind of memorabilia?  In this case, the value is precisely the $46,000 the anonymous bidder was willing to pony up.  More broadly, of course, the value of such items is that they evoke a time, a place, and a person.  Anyone who sees the suit and hears what it is will think of the iconic cover photo, where Lennon led Ringo Starr, a barefoot, smoking Paul McCartney, and George Harrison across the street on a striped crosswalk, with the white Volkswagen in the background.  And knowing that the suit has been worn by an important historical or cultural figure allows the viewer to establish a more intimate connection with that figure.  “Hey, John Lennon wore this very suit.  Gee, I thought he was taller.”

I am not a collector, and I can’t imagine paying thousands of dollars for an old suit.  But Lennon’s suit would be a nice thing to see in an appropriate museum — say, the Rock and Roll Hall of Fame — so visitors could look at it and think of a blue sky day when four rock music giants who were coming to a brilliant end to their collaboration walked across a British street.

Today is Ringo Starr’s 70th birthday.  He is celebrating with a private event at the Hard Rock Cafe in New York City, followed by a concert at Radio City Music Hall.

I always thought Ringo Starr was a vastly underrated rock drummer.  Because he was a character who became known for his “Ringoisms”  — like “a hard day’s night” — I think many people considered him to be less important musically than other members of the Beatles.  When Lorne Michaels offered some ludicrously small amount for the Beatles to reunite and play on Saturday Night Live, he specifically said that the other band members could give Ringo a lesser cut if they wanted to.  It was supposed to be funny, but it was a cruel joke.

Sure, Ringo didn’t write many songs or have many singing hits when he was with the Beatles.  (Ironically, for a few years after the Beatles split up, Ringo had the most post-Beatles hits of any ex-member of the band, with songs like It Don’t Come Easy and Photograph.)  Nevertheless, he was the man who put the beat in the Beatles.  He had rock ‘n roll in his soul and never let showmanship get in the way of keeping the beat.  Listen to the ferocious drumming on, say, Twist and Shout and you will know what I mean.  Anyone who likes to dance to the early Beatles tunes — songs like Dizzy Miss Lizzie or I Saw Her Standing There — should tip his cap to Ringo Starr because his excellent drumming made those songs easy to dance to.  Even on his one drum solo — at the end of side two of Abbey Road — Ringo seemed to focus mostly on the beat, and not on technical flourishes or showoff riffs that detracted from the rhythm.  Yet within that guiding framework, Ringo also was capable of inventiveness.  Rain and Come Together are two pretty good examples of that fact.

I think it is safe to say that the Beatles without Ringo would not have been the Beatles.  Happy Birthday, Ringo!  Let’s celebrate with this video of Rain: