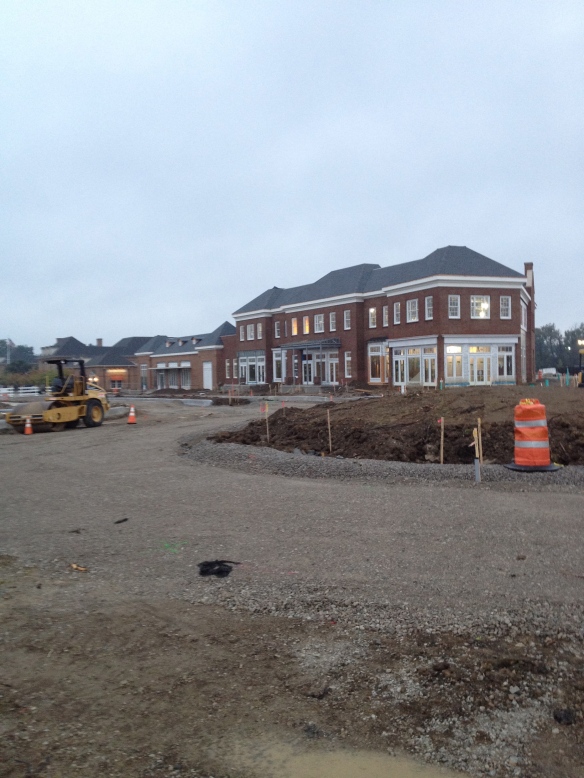 They’ve been working on the newest New Albany traffic circle, at the intersection of Market Street and Route 62, for several months now.  It’s been a pain for us because it removes one of the primary traffic corridors and routes everything through our neighborhood.  It’s a different feel to be riding your bike on suburban streets that are rumbling with lots of traffic.

Still, we think the sacrifice will be worth it.  The other traffic circles in our area — particularly the one in front of the Kroger and at the intersection of Route 62 and Morse Road — have a made a huge difference in traffic flow.  Long lines of idling cars that used to be found at those locations no longer exist.  Traffic circles also are more fun than a stop sign and a simple left turn.

We’ll be grateful when the construction is ended and the new circle is open, but it’s safe to say we won’t be the happiest recipient of that news:  the long-suffering CVS at the corner of 62 and Market Street has basically been marooned for months, stranded on a little island of commerce in a muddy sea of construction.

Lately they’ve been taking down trees along the Yantis Loop and Route 62.  It’s a sad occasion for the walkers, cyclists, and joggers who use the path.

For the most part, the now-missing trees weren’t the kind of beautiful, spreading trees about which Joyce Kilmer might wax rhapsodic.  Instead, many were what Kish would call “field trees” — the kind of scrawny trees that farmers might use to visibly mark the boundaries between one field and another.  Still, they provided some shade, protection from the elements, screening from the roadway and the noise of passing cars, and the sense that you were walking through a rustling tunnel of green leafiness.

Now they are gone, and there are just sorry, straw-covered spots on the ground where the trees once stood.  As I said, it’s a sad occasion.

I’m not sure whether these waters run deep — the temperature this morning was hovering around 40 degrees, and I wasn’t about to take a dip — but the still surface of this pond next to Route 62 were perfectly reflective of the houses and trees across the roadway.