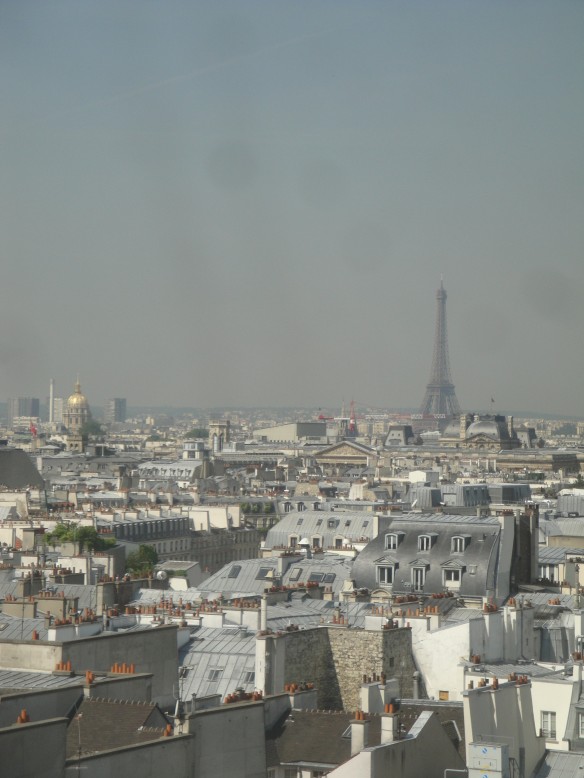 Today Richard and I walked over to the Pompidou Center, which is located a few blocks in from the right bank of the Seine.

Notre Dame and the Pantheon

The Pompidou Center is famous as the “inside-out” building, where all of the piping and wiring for the building is on the outside and is color-coded, with separate, bright colors for the pipes that deliver water, electricity, and so forth.  The effect is quite striking, and makes the exterior of the Pompidou Center one of the most interesting buildings in Paris.  The Pompidou Center also is home to an extensive collection of modern art, as well as a library, cinemas, and other areas dedicated to the visual arts.

Whether you appreciate the modern art or not — and I’m going to have to go with Russell one of these days, so that he can explain the ideas behind some of the pieces — you have to love the view from the top of the escalator on the outside of the building.  It may be the best panoramic vantage point in Paris.

The escalator, like the piping and wiring, also is inside out.  It runs up one side of the building overlooking a square.  And when you reach the top, you get a commanding view of three of Paris’ most famous landmarks:  Notre Dame, the Eiffel Tower, and the Sacre Coeur.  The view alone is worth the price of admission.

The view also makes you realize that the older part of Paris really is like Washington, D.C. — lots of buildings of pretty much uniform height, and then some special landmarks that really dominate the skyline.  It is probably one of the few famous cities in the world where church steeples and spires remain some of the highest points in the urban landscape.

Our firm has a wonderful benefit called the Seymour Plan. Named for the son of one of the founders of the firm, who was a committed traveler, it is intended to help associates broaden their horizons by going to a country that speaks a different language. The Seymour Plan pays for a round-trip airfare and has helped hundreds of Vorys attorneys visit countries in continental Europe.

In 1992 Kish and I took our Seymour trip and our continental European destination was Paris. We received lots of recommendations on where to stay and chose a small hotel called the Hotel de Banville. It was an inspired choice. The Hotel de Banville is close to the Arc de Triomphe in a quiet residential neighborhood and is filled with charm and grace. We stayed in a room on the top floor with sloped ceilings and a checkered bathroom floor, and you could open the windows, let the drapes blow into the room, and look out over the rooftops of Paris toward the Arc de Triomphe nearby. In the morning we would wander down the stairs to the colorful breakfast room below for a freshly baked continental breakfast and some strong coffee before setting out to explore Paris.

It says nothing surprising to say that Paris is a magnificent city. Although we were there in early April, when skies were grey and spring showers were ever present — so much so that my enduring memory of the trip is Kish, in a bright green raincoat, standing on the rain-shined streets of Paris — but even then the city seemed bright and full of life. We walked to the Arc de Triomphe and the Tour Eiffel, visited the Louvre and some of the famous sites from the French Revolution, and strolled past shops, cafes, and bistros. We had a wonderful time in Paris. We particularly enjoyed walking the boulevards, stopping to eat or drink coffee whenever our whims dictated. Some particular pleasures were the dazzling white Sacre Coeur and its surrounding neighborhood, the unexpected discovery of a statue of George Washington in the middle of a Parisian square, the Seine and its walkways, and the extraordinary flying buttresses, ornate Gothic architecture, and soaring interior of the Cathedral de Notre Dame.

We were not quite as taken with the Louvre, simply because it is so enormous and overwhelming. It seemed as though we walked through dozens of rooms featuring, to our uneducated eyes, nearly identical, iconic Madonna and Child images. It was nice to finally see Mona Lisa, but it was hard to get very close to it with the crowd gathered in front of the painting, filled with people jockeying to inch closer to the masterpiece. Winged Victory made a bigger impact on me and was easier to see.

One final point about Paris: I’ve been fortunate to visit Paris several times, and I’ve never encountered anything other than friendly and welcoming proprietors and Parisians. Although some of the waiters can be a bit haughty — they take their trade very seriously, after all — the people themselves seem friendly and appreciative when you make the effort to order a meal using your high school French. I think France in general, in Paris in particular, has gotten a bum rap, and anyone who listens to that bum rap and skips a chance to visit The City of Lights is missing a tremendous experience.