The other day I was driving on a highway, tooling along on a clear and bright spring day during a non-rush hour period, when I came upon a little traffic snarl.  Road construction?  Rubber-necking past an accident site?  Nope.  It was somebody driving too slow in the passing lane, causing other cars in that lane to pile up behind him as he inched past the car in the slow lane.  Then people started to duck around the line of cars to see if they could pass by on the right.  Suddenly you had another illustration of my long-held view that the real problem on the highways is not your average speeders — that is, the people who routinely drive above the speed limit, as opposed to the drag racers or road ragers — but rather drivers who are driving too slow in the wrong place at the wrong time. 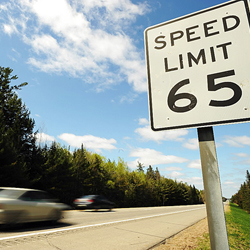 Traffic engineering studies that substantiate this belief.   When traffic engineers review the speed limits on road, they invariably try to set the limit using the “85th percentile” method: that is, finding the number at which 85% of drivers drive at or below the posted speed limit and only 15% exceed it.  Why?  Because while most people drive at what they think is an appropriate speed given the prevailing conditions — a speed that often doesn’t conform to the posted limits — there is a core of people who actually faithfully obey the speed limits.  If the posted speed limits are set too low for the “I’ll drive at an appropriate speed” crowd, you’ve created a situation where there is a significant speed variance between that group and the speed driven by the faithful obeyers.

And that is the point of maximum roadway danger, according to the U.S. Department of Transportation, which has concluded that “the potential for being involved in an accident is highest when traveling at speed much lower or much higher than the majority of motorists.”   As the article linked above notes, the 85th percentile approach is the traffic engineers’ method of threading the needle between the approaches of the appropriate speeders and the faithful obeyers:  “Traffic engineers believe that the 85th percentile speed is the ideal speed limit because it leads to the least variability between driving speeds and therefore safer roads. When the speed limit is correctly set at the 85th percentile speed, the minority of drivers that do conscientiously follow speed limits are no longer driving much slower than the speed of traffic.”

But here’s the rub:  setting speed limits to actually match the 85th percentile test would mean raising the speed limits on most American roads, because right now about 50 percent of drivers routinely exceed posted speed limits.  In short, the appropriate speeders are telling the traffic engineers that the posted limits are too low, so to get to the 85 percent figures engineers would need to increase the speed limits.  That move would be applauded by the majority of drivers, but lower speed limits are reflexively supported by safety advocates — and by towns that pad their budgets by issuing speeding tickets on the stretch of roadway that passes through the township limits.  Everybody who lives nearby knows where those speed traps are. but the out-of-towners get tagged with expensive tickets, pay them by mail, and help the town to hit its revenue projections.

Traffic issues are one of the great imponderables in modern society, where the experts say all of their data and experience points in one direction — raising speed limits — but political considerations work in the opposite direction and keep the limits below what most drivers would prefer.  On most roadways, that magic 85th percentile number remains a pipe dream that probably won’t be realized until the human factor is eliminated and we’re all being moved around by self-driving cars.

Commuting presents a daily set of challenges and frustrations.  There are the timid souls who don’t understand that the proper way to merge onto a highway is to accelerate into the traffic flow, rather than creeping up to the merge point, hoping that the traffic on the highway will make way and then braking suddenly when that doesn’t happen.  There are the oblivious types who are talking on their phones or, God forbid, texting, and therefore not paying the slightest attention to what they are doing.  There are the self-absorbed characters who click on their turn signals and then immediately begin to drift into the next lane, as if the simple act of initiating the turn signal gave them a magic pass that automatically cleared the way for their cars.

For my money, the worst offenders are the people who seemingly do not grasp the purpose of the passing lane.  When I took my driver’s education class and ventured out, for the first time, onto a four-lane highway, the instructor made it clear that the left lane was the passing lane.  You moved into the left lane if you wanted to pass the car or truck in front of you, and when you had completed the pass you moved back into the right lane.  This allowed traffic to flow properly.

This salutary concept evidently is lost on some people.  In their view, the left lane is simply a lane like any other, to be occupied by traffic.  If they are going to be turning left in two miles or so, they may as well get over into the left lane now, stake their claim to that spot in traffic, and continue to drive their normal speed — which typically is about 5 miles below the speed limit.  Why not?  It’s more convenient for them.  In the meantime, the traffic piles up behind them and then frazzled commuters begin to consider whether they can shoot around the car on the right — and when they attempt that maneuver the offender, shaken from his reverie, usually speeds up for some reason.  Eventually people start driving recklessly, brake lights flash, and accidents happen.  I’ve often thought that more accidents are caused by overly slow drivers that overly fast drivers.  Others agree; this website has a helpful collection of quotes that make that point.