Although I was exhausted after spending the night sitting in a train seat, stuck in that area between consciousness and sleep that makes you wonder afterwards whether you were actually sleeping or not, after arriving in Krakow I set off to see the former factory of Oskar Schindler. Schindler’s List was filmed at the factory, so I recognized many rooms from the movie.

The factory was recently converted into a museum about the Nazi occupation of Poland. The museum didn’t dwell much on the story of Schindler saving his Jewish workers, unfortunately, but it did a wonderful job showing what conditions were like under the General Government. In nearly every room there were computer consoles with a selection of video interviews of Poles telling stories about their experiences of that era. I love it when museums include personal stories like that.

My main impression from the museum was how appalling the actions of the Nazis were – not exactly a novel insight. Nazi Germany did everything it could to make Poland into a colony where the Poles served Germans as slaves. They attempted to wipe out Poland’s intelligentsia and keep children from learning to read or to count above 500.

My hostel, the Goodbye Lenin hostel, was only a few blocks from Schindler’s factory. I had a wonderful time staying there and would rank it among my top five favorite hostels. It had a beautiful garden area with plenty of picnic benches, free computers (although slow ones), a good kitchen, and an extraordinarily generous free breakfast that included cereal, orange juice, coffee, tea, jelly, butter, chocolate spread, honey, cookies, and an assortment of meats and cheeses. I found that if I ate a really large breakfast right before it ended at 11, it sufficed as lunch.

The hostel also provided lots of activities that made it easy to meet people. One night an employee started a game of Kings (they call it Circle of Death or Circle of Fire in Europe), providing free shots of vodka and orange juice.

On my second day in Krakow I took a bus to Auschwitz-Birkenau. My experience at Auschwitz was like my experience at Sachsenhausen in Berlin – I had trouble comprehending the extent of the horror that occurred there. I tried to keep in mind the fact that 1.5 million people were murdered on the ground I was walking on, to imagine what it must have been like for both the prisoners and the guards, but I couldn’t understand it. I know what literally happened there, I know the chain of events that led to Auschwitz, but I don’t know how it happened on a personal level for the people involved. How could millions of Germans, real thinking people, have collaborated to make what was basically a factory for killing people? How did the people who were imprisoned and killed there endure what was happening to them?

Some bunks at Birkenau. 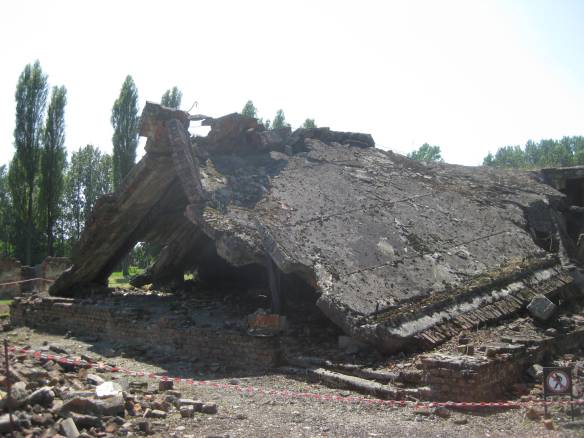 A gas chamber the Germans attempted to destroy before the war's end.

There were lots of pictures on display of Jews arriving at the camp, being split into two groups: those fit to work and those to be gassed to death. It’s interesting to look at the expressions on their faces. They usually look unhappy, but not utterly miserable or terrified – they have the same hard expressions you would see on the faces of people waiting in a really long line. Maybe they had been suffering for so long that they resigned themselves to it. Some of them probably coped by staying hopeful. Many did not know that they were about to be killed, because the Germans hid it from them. Either way, it’s heartbreaking to look at those photographs, which always include mothers holding their babies and children holding hands.

The Birkenau part of the camp, where people were gassed, is so spread out that it makes you feel lonely and bleak. The day I went happened to be really hot and humid. The Germans tried to destroy the gas chambers in the last days of the war, so all the remains are some collapsed roofs.

The Auschwitz part (a short, free bus ride away), consists of rows of brick houses that don’t look like they were used for sinister purposes. They look like they could be part of a nice college campus. In these houses lived those who were lucky enough to be chosen as workers. The buildings have been turned into museums about daily life in the ghetto, the Polish resistance, the Nazis’ confiscation of property, etc. 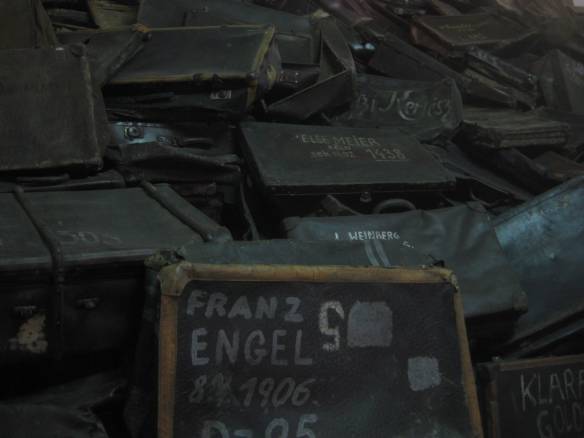 Suitcases taken from those imprisoned at Auschwitz.

Inside, there were displays of suitcases, glasses, and children’s toys taken from the Jews by the Nazis. The most horrifying was a display of hair cut off the heads of murdered women, for sale to the German textile industry. Again, I can’t understand how so many Germans could have worked together to find a way to use the hair of murdered women in clothing, apparently thinking it was an okay thing to do. It is unbelievable, something that belongs in a ridiculous Hollywood screenplay, not in real life. Maybe extreme circumstances such as those occurring in Nazi Germany bring out a side of human nature that we don’t see in our relatively comfortable lives.

I was fortunate to have a pretty, pleasant city to return to after leaving Auschwitz. Krakow is small, feeling more like a town than a city. Pretty much everything is within walking distance. The market square has a beautiful brick cathedral and Gothic market, and on the edge of the old city there is a castle on a grassy hill. My favorite thing about Krakow, physically, is the park that surrounds the old city in a giant ring. 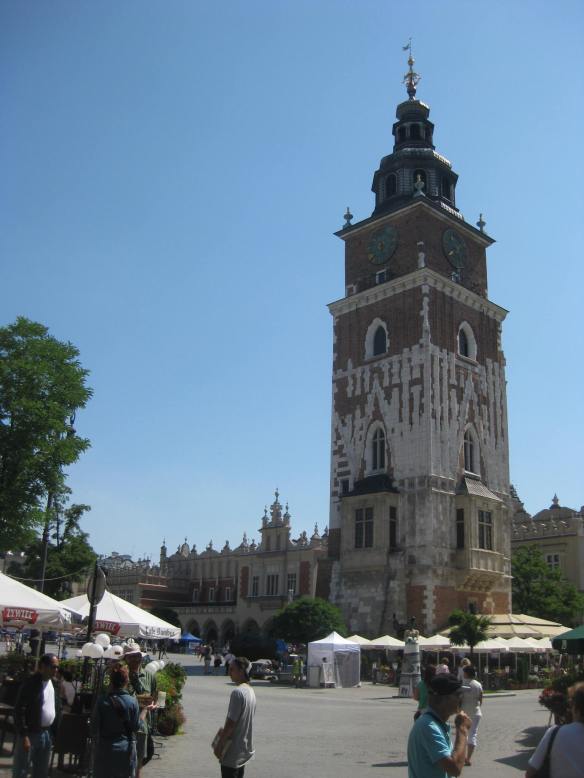 The tower in Krakow's market square.

Yesterday, I got lost on my way to the airport, arriving minutes after the gate closed but before the plane took off, so that I could see the plane I was supposed to be on outside the window. I had to pay a fee to change for a flight the next day, but I was surprisingly okay with it. After traveling so long, I’ve learned to accept my own mistakes and bad fortune. I decided to walk back to Krakow from the airport using country roads. It was a lot of fun until near the end when I got really exhausted.

Maybe I didn’t care much about missing my flight because it meant I got another day in Krakow. I had been feeling guilty about only booking three nights there. I was happy to spend one more night drinking cheap beers with my new friends from Georgia (the country), the Netherlands, England, and Scotland.

I think being an actor would be an enormous challenge.  To be successful as an artist, you have to understand your character, get into their skin, and faithfully assume their personalities and mannerisms.  Otherwise, it will just look like someone acting.  On the other hand, to put bread on the table, you will need to accept jobs in movies that aren’t exactly artistic triumphs — perhaps a remake of a popular TV show, or a comic book adaptation — often wearing ridiculous get-ups.

When Kish, Russell and I went to watch Shutter Island on Saturday we saw the preview for the remake of Clash of the Titans.  The original dates from the ’80s and was a Ray Harryhausen stop-motion epic starring Harry Hamlin.  The remake features, among other notables, Liam Neeson as Zeus, the King of the Gods.  At one point in the trailer, Zeus says “Release the Kraken,” which is an enormous, large-toothed, screeching, earthen monstrosity.

It must have been tough for Liam Neeson, so memorable in Schindler’s List and recent fare like Taken, to speak that dialogue.  As he does so he is clad in some glowing, shimmering kind of armored breastplate and a cape, with long hair and a long beard.  How do you decide how to say such a line as such a character?  “Release the KRAKEN!”  “RELEASE the Kraken!”  “RELEASE THE KRAKEN!!!!”  Waving hand and shrugging, “Release the Kraken.”  Shatner-like:  “Release . . .  the Kraken.”  (Shatner probably would have been a good Zeus, come to think of it.)

Neeson pulls it off, somehow, speaking the lines with a sense of weariness, indignation, and resignation, as his breastplate glows and his beard hairs flap in the breeze.