Once, I was a big breakfast person.  Mom was a charter member of the “breakfast is the most important meal of the day” cult, and she insisted on our having a “healthy breakfast” before we headed off to school. 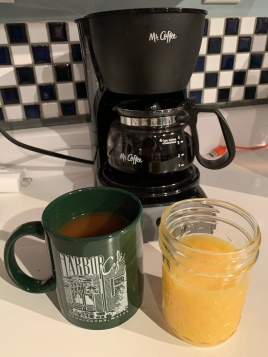 In those days, a “health breakfast” meant a big bowl of Frosted Flakes, Captain Crunch, or Quake during the warmer months, and oatmeal, Cream of Wheat, or some other hot cereal — always with brown sugar, of course — and a glass of juice, and a glass of whole milk, and probably some toast with jelly, besides.  Fortified and carboloaded with our “healthy breakfasts” and bundled up against the morning chill, the Webner kids went out to wait for the school bus and take on the world.

But over the years, my tastes and breakfast interests mutated.  Some of it was due to speed; there just doesn’t seem like a lot of time in the morning to make a big breakfast.  Some of it was due to weight; at some point, large mixing bowls of sugary cereal suddenly didn’t seem like such a wise move from a belt size standpoint.  And some of it, frankly, was just a matter of taste.  I got to the point where I didn’t like the feeling of gobbling down a bunch of food first thing in the morning.  Restricting my intake to a cup of coffee and a small glass of orange juice left me feeling a bit lighter and less logy.  And I also figured that if I limited myself to a small breakfast, that would leave plenty of room on the calorie counter for a nice lunch.

Is breakfast “the most important meal of the day,” as Mom’s creed dictated?  Beats me!  Given the ever-changing “science” of human dietary needs and food pyramids, I doubt if anyone really knows.  These days, I pretty much just for go what makes me feel better.  I suppose if I was going out and waiting for the school bus in the chill morning air, then taking a loud, rattling, 45-minute, seat belt-free ride with a bunch of other rambunctious kids headed off to school and charged up by their own intake of sugary cereals I might feel differently.