When the Scioto Mile project was first announced years ago, there was a lot of skepticism about whether focusing on Columbus’ sluggish river area could ever produce benefits. I was admittedly one of the skeptics. Now that the project has been completed and had a few years to develop, I’ve become a believer. I think the Scioto Mile has become a really great addition to the roster of Columbus green spaces.

The Scioto Mile is physically different from the traditional downtown Columbus green spaces, like the Statehouse grounds and Goodale Park, because it is a long, sprawling stretch of green that runs along the river rather than being a defined rectangle, which is the configuration of most traditional parks. The length of the park, which runs for more than a mile, gives it a decidedly different vibe than other parks. The uninterrupted walkways that duck under the bridges spanning the river make it a favorite for cyclists, joggers, and walkers, for example. And the extended nature of the park means there is plenty of room for interesting and distinctive spaces. One of my favorites is an area directly behind the federal courthouse that is filled with statues of whimsical creatures positioned along a rolling lawn. Who wouldn’t want to sit down next to a griffin or a unicorn and watch the river roll by?

I’ve got to give credit to the city planners who came up with the Scioto Mile project and then executed on it: it’s definitely had a positive impact on the downtown area and the workers and residents who frequent it.

A glorious spring weekend continued today in Columbus. The grass was lush and bright green, the sky was blue, and the air was warm and bore a light floral scent. It was a perfect day for a walk on the Scioto Mile and the Olentangy River trail—as countless cyclists, joggers, walkers, and skateboarders recognized.

Spring never seems to last long in Columbus; we tend to move directly from winter to summer with barely a breath of spring in between. Even the temperatures this weekend have been more like summer than spring. It’s important to enjoy these beautiful days when they are here. Regrettably, they’ll be gone soon enough.

The Scioto Mile path offers the walker a choice: you can take the high road, or you can take the low road. The high road pretty much sticks to street level. The low road, on the other hand, hugs the river, and leads you down on a winding path that runs beneath the various traffic and railroad bridges that span the river.

I prefer the low road, and the bridges are a big part of the reason why.

Street-level views of the world are fine, of course, but that’s what we get every day. To me, the engineering underworld of concrete spans and bridge abutments and rip rap is a nice change of pace. It is especially interesting on a cold, clear morning, where the sunshine plays with the concrete and metal and adds a new element to the views.

When we hear debate about infrastructure, bridges are a lot of what we’re talking about. To my unschooled eye, the downtown Columbus bridges over the river look to be in pretty good shape, with no apparent cracks or sags or exposed rebar. And they are interesting bridges, too, from a design standpoint. I doubt if the bridge designers focused overmuch on the underside views as opposed to the topside perspective, but the underside views are compelling nevertheless. Looking at the bridges from below helps you to understand how bridges work, and also leads to an appreciation of the artistry of sound engineering. 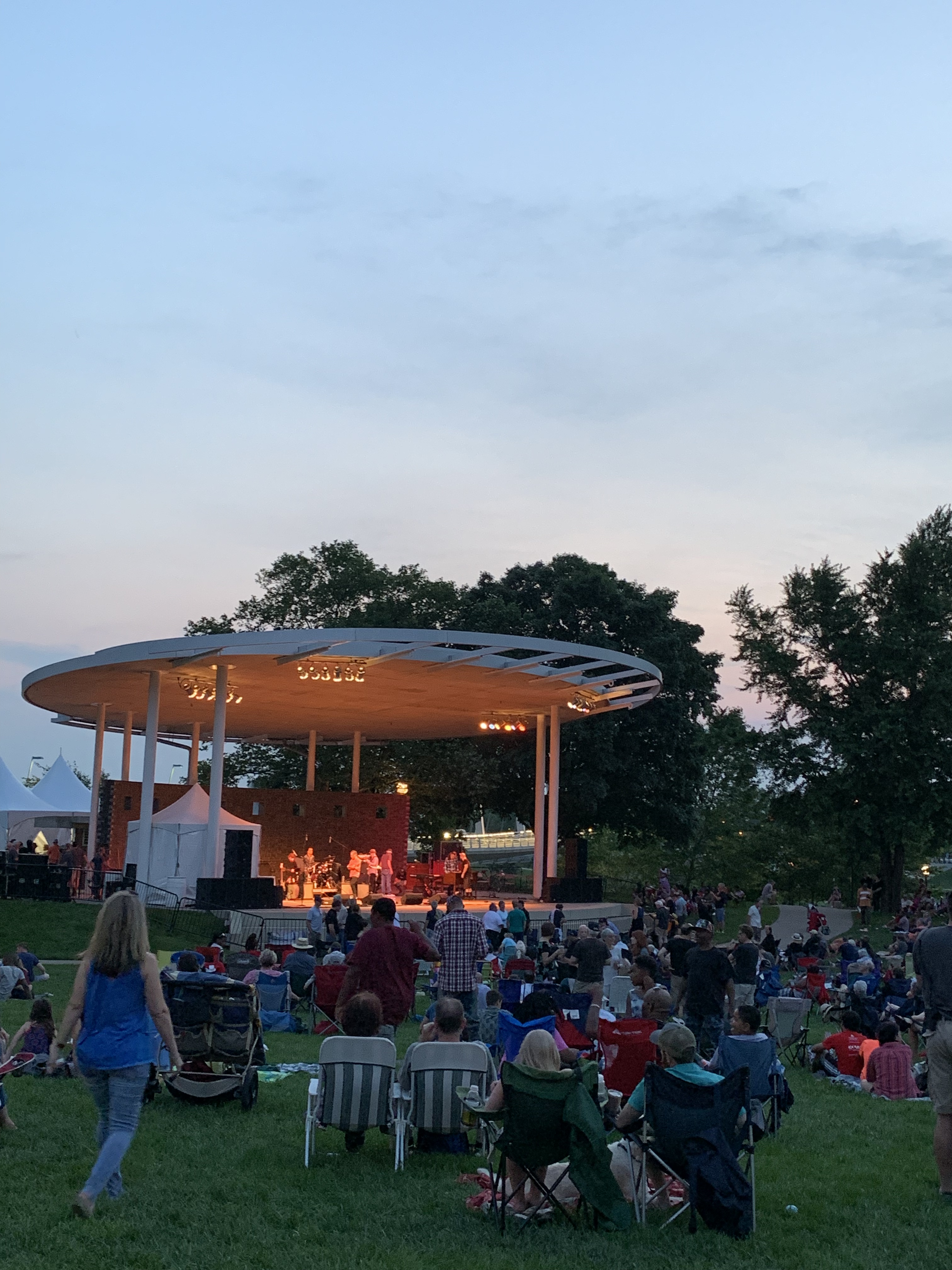 Last night we joined Dr. Science and the GV Jogger and checked out the Rhythm On The River festival at Bicentennial Park on the Scioto Mile in downtown Columbus. ROTR is a free event that featured a full day’s worth of musical acts. We arrived in time to listen to the last two acts — The Ides of March, who had a hit in the ’70s with “Vehicle,” and ’80s MTV staple The Fabulous Thunderbirds. It was a fun event on a beautiful early June evening.

If you’ve never been, the Bicentennial Park Amphitheatre is a good place to listen to live music. We lugged over some chairs and set up on the wide lawn in front of the Amphitheatre; even though we got there late there was plenty of room to find a good spot and get set up. The only drawback to a late arrival was that most of the food trucks were either sold out or besieged by very long lines. We endured a reasonable wait and picked up some excellent grilled cheese sandwiches from the Momma Can Cook food truck then settled back to enjoy the music.

As I enjoyed the music wafting by on a pleasantly warm evening and looked around at my fellow festival-goers, I thought about the value of a community festival like ROTR. It drew a very diverse crowd, and all of us sat together on a pretty green lawn, sharing a fun mutual experience. People who brought kids watched them play in the fountains next to the park, and everyone had a good time. It seems like the kind of thing cities should want to encourage.

This would not be news anywhere but Columbus, Ohio, but yesterday when I walked down to the Columbus Arts Festival after work I saw people in canoes and kayaks out on the Scioto River as it passes downtown.  They were paddling around, enjoying the blazing sunshine and their water view of the downtown skyline.

I know, I know — rivers are supposed to host canoes, kayaks, and even (gasp) boats.  But that hasn’t been the case with the poor old Scioto.  Ever since the government built dams that converted the river into a wide, incredibly shallow morass as it crept past the downtown area, the Scioto has been a de facto no man’s land for any kind of waterborne craft.  You’d see ugly, twisted branches thrusting from the ankle-deep water, often catching various bits of debris that were floating by, but that’s about it.  No rational canoeist or kayaker would venture out onto the river’s snaggle-toothed waters.

Then Columbus decided to do something to try to make the riverfront a little bit better.  The dams that made the Scioto a sluggish, muddy stream were torn down, and the river was allowed to return to a narrower, deeper, more natural channel.  This not only uncovered lots of additional parkland on the river’s new banks, but also was supposed to allow some recreational activity on the river itself.  So when I saw canoes and kayaks out on the water yesterday, I thought:  “Hallelujah!  The plan worked!”

We can argue about why the stupid dams were built in the first place — you could write volumes about the unfortunate, unanticipated consequences of government dam projects, actually — but at least we’ve gotten to the point where a couple in a canoe can paddle past downtown Columbus.  It actually makes the Scioto seem like a real river, and the Scioto Mile seem like a real riverfront.

The Columbus Arts Festival is here for the weekend.  Today, on a hot, sunny summer day, there were big crowds checking out the artist stalls and buying the food offerings.  There are some interesting offerings in just about every artistic discipline you can identify.

Be forewarned:  Shady spots were in short supply and much coveted.  Festival-goers will be happy when the small trees recently planted in the new sections of the Scioto Mile park grow up, leaf out and provide some relief from the sunshine on days like this. 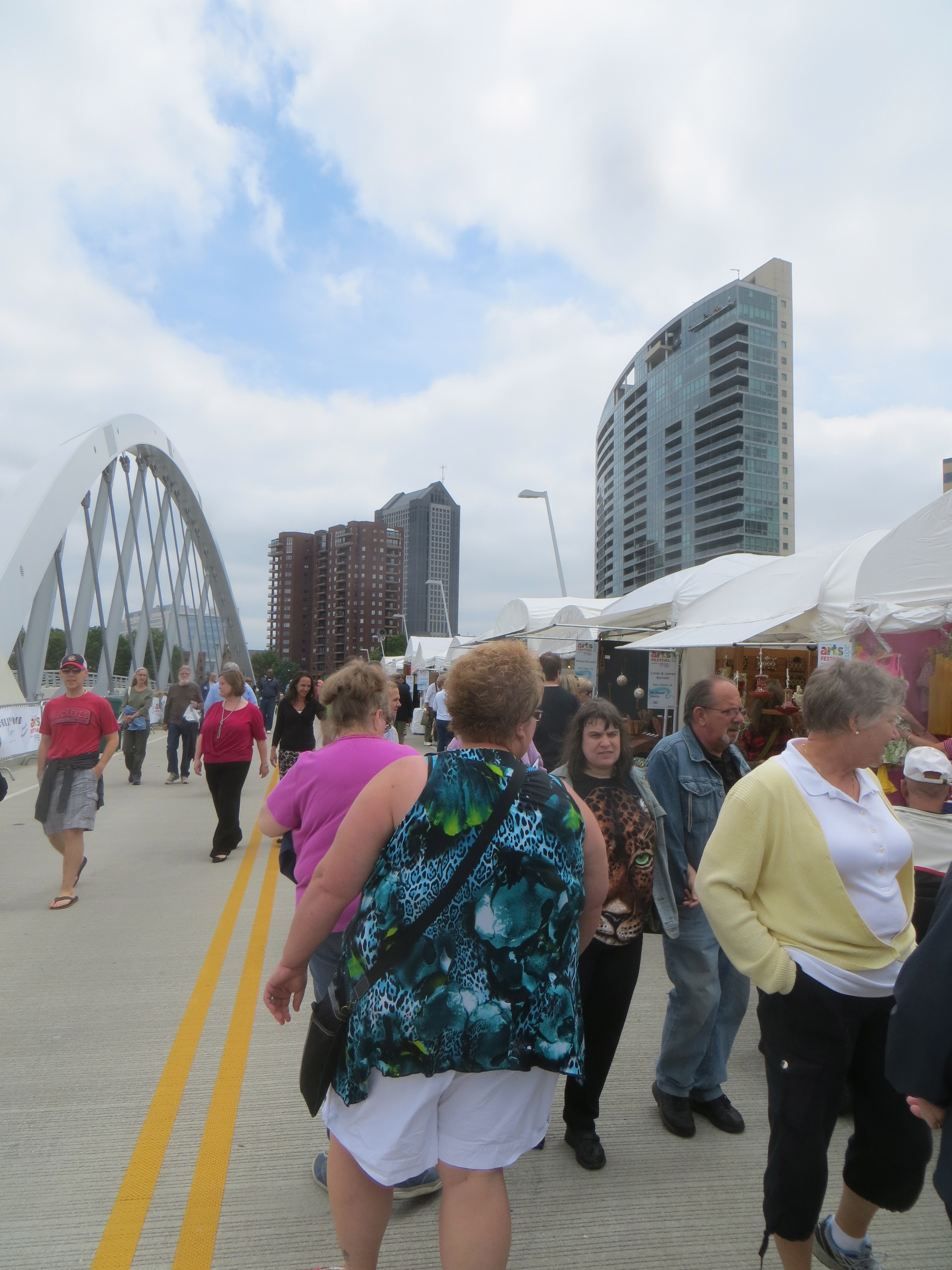 It’s the weekend of the Columbus Arts Festival, so for lunch today the Unkempt Guy, the Bus-Riding Conservative, and I walked down to the Riverfront to take in the show.  It was a cool day, but there was a good lunchtime crowd, music was playing, the scent of elephant ears was in the air, and there was lots of art to check out — ranging from paintings to folk art to sculpture to items that appeared to be made from hammered bottle caps.

The Arts Festival runs all weekend along the Scioto Mile, across the Scioto bridges and looping back again.  It’s worth a visit.

Today I went to lunch with friend and loyal Webner House reader and commenter Mike N.  We met at Milestone 229, at the southern end of the Scioto Mile.

We sat outside, next to the the fountain and sprinkler area that is a huge hit with kids during the summer months, and watched the water show as we talked about what’s going on in the world.  The sky was blue, and the clouds went sailing past on a gentle breeze.  It was a warm day, and I enjoyed the September sun on my back.  It also felt good when the main fountain erupted and the breeze threw a fine spray of cooling water in our direction, lightly dusting the back of my neck.  We had a terrific lunch (thanks for treating, Mike!) and chat, and then we walked back toward the heart of downtown along the Scioto Mile.

When I got back to my desk, I checked the news websites to see if there had been any more riots and attacks on Americans in the Middle East. 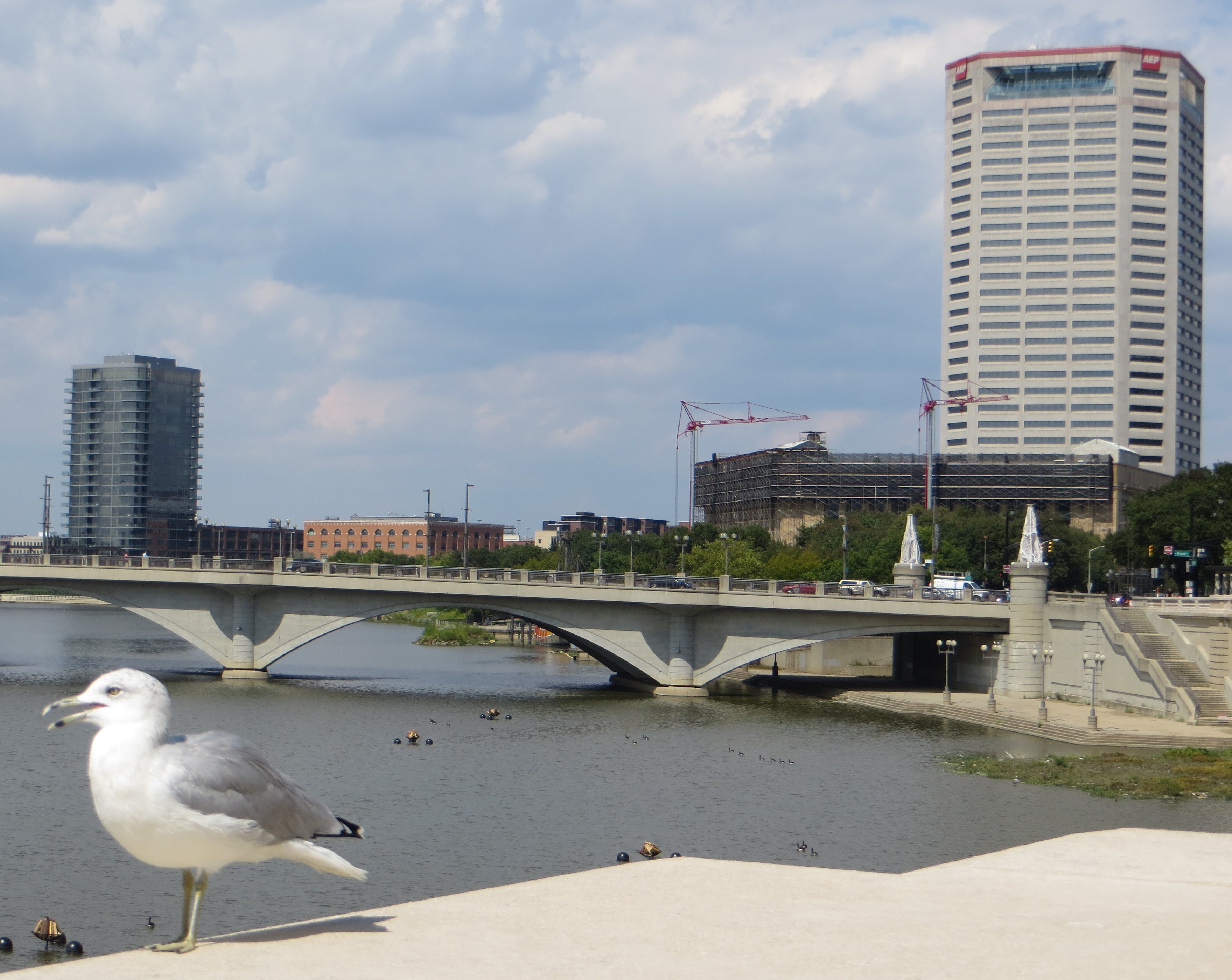 Today, walking along the Scioto Mile and heading back to the office after lunch, I saw an odd sight:  a seagull perched boldly on the concrete abutment next to the walkway.  The purpose of the Scioto Mile was to make the riverside into more of a part of the downtown experience, and I found myself wondering momentarily whether the gull had been hired and trained to hang out along the Scioto Mile as a kind of ready-made photo opportunity, so people would be reminded that there is, in fact, a waterfront in Columbus, Ohio.

It’s strange, indeed, to see a seagull framed against the Columbus skyline.

I should add that, as I walked along the Scioto Mile to the Columbus Arts Festival this morning, I ran across a mother duck who apparently had wandered out of the river with her ducklings.  She was fiercely protective of them — particularly when a dog trotted by — and tried to shield then behind a fence as I walked by.

Columbus wants to complete its Scioto Mile Park with a monumental sculpture.  The plan is to add a large piece of artwork along the riverfront that will become as identifiable with Columbus as the Gateway Arch is with St. Louis and the Space Needle is with Seattle. 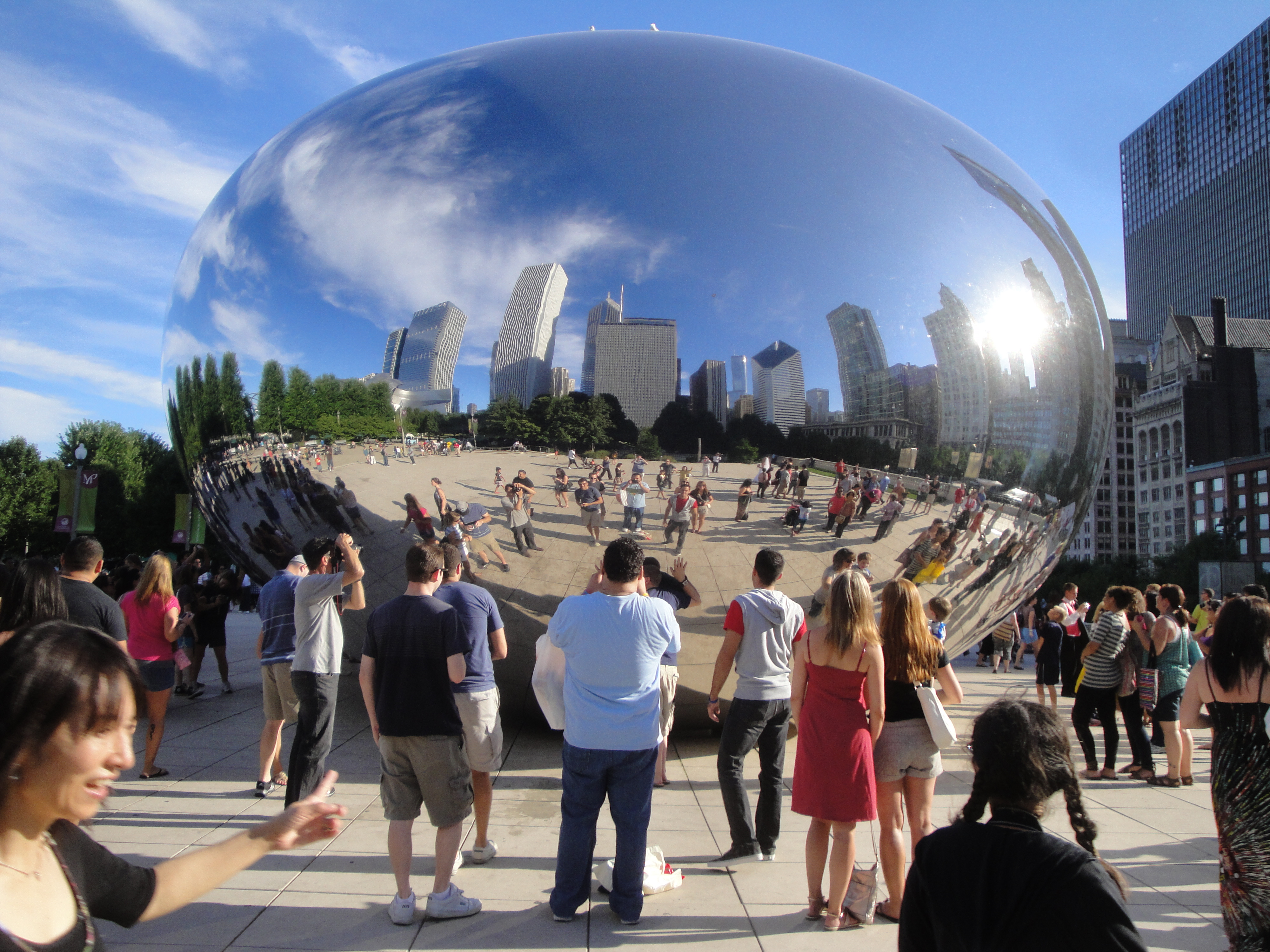 The proposed piece would be abstract, six stories tall, made of reflective metal, and shaped like . . . the cooling tower of a nuclear plant.  Not surprisingly, some people are questioning that design.

I like the idea of putting a large piece of public art along the Scioto Mile.  I think it should be a bold statement, not some timid, compromise product of a committee.  We don’t need another realistic sculpture like the big statue of Christopher Columbus in front of City Hall.  I’m not sure how I feel about the “cooling tower” design — it seems like the shape is so defined with nuclear plants that viewers won’t really see or think of anything else — but I’m willing to reserve judgment if that is the piece that is selected.

Anyone who has been to Millennium Park in Chicago knows that people are attracted to large, memorable public art pieces like “the Bean.”  If the “cooling tower” is interesting, fun to look at, well made, and allows for interesting photo opportunities, people will go see it — and that, after all, is the idea.