We’ve seen several nights of mostly peaceful protests, in a number of American cities, in the aftermath of Tuesday’s shocking election of Donald Trump.

In Oregon, two Portlanders have submitted a ballot proposal to have Oregon secede from the Union — although they say it’s only “partially” a response to Trump’s election, because they feel much of the United States no longer subscribes to “Oregon values” of life, liberty, the pursuit of happiness, and equality.  Groups in California also are talking about secession. 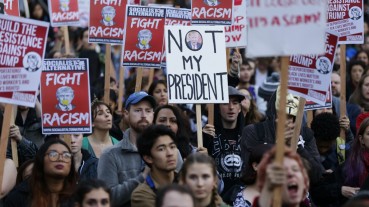 And, because Hillary Clinton won the popular vote, people are asking questions — which get raised after every close presidential election — about whether we should abolish the Electoral College and just elect our President through a simple national referendum.

I’ve got no problem with any of these developments.  In America, people have the right to protest thanks to the First Amendment, and we’ve also got the right to take a fresh look at our constitutional institutions and decide whether to change or reject them through the constitutional amendment process.  I’m not in favor of the states along the west coast, where we have lots of friends and family, actually seceding from the United States, of course, but I also have no problem with people seriously discussing the disconnect between the perspective on the coast, where voters gave huge majorities to Hillary Clinton, and the results found in the interior, where Donald Trump racked up huge vote totals.

I think all of these developments are signs of a healthy, functioning democracy, and they also convey an extremely important message:  elections have consequences, and voting is the way to produce the consequences you favor.  In 2016, tens of millions of Americans didn’t vote at all.  Hillary Clinton got about 6 million fewer votes than Barack Obama did in 2012, and early indications are that certain groups — like “Millennials” — didn’t turn out to vote in the same way they did in 2008 and 2012.  We’ll never know what the election results would have been if all of those eligible voters had exercised the most basic democratic right of all, but it sure isn’t a bad thing if the people who didn’t vote now feel remorse and resolve that it will never happen again.

Wouldn’t you like to know whether all of the people out protesting Trump’s election actually voted on Election Day?

The BBC reports that more than 100,000 Americans have posted petitions asking to secede from the union to a White House website.  The petitions apparently quote the Declaration of Independence, which speaks of when it “becomes necessary for one people to dissolve the political bands which have connected them with another,” and cite “blatant abuses” of citizen rights such as overly intrusive screening by the Transportation Security Administration.  The most popular petition, from Texas, has attracted more than 25,000 signatures.

I suppose the would-be secessionists recognize they can’t really secede — hundreds of thousands died in a bloody Civil War to establish that principle — and are merely hoping to make some kind of symbolic statement.  But for what purpose?  Saying that you want to secede because your candidate lost is as stupid and mindless as dim-witted celebrities like Cher threatening to leave the country if the Republican candidate wins.  In both cases, the sentiment expressed just reflects negatively on the speakers as juvenile sore losers who want to take their ball and go home.  What rational American is going to be persuaded by a petition that posits that overly aggressive TSA pat-downs justify secession from the United States?

Rather than submitting silly and counterproductive petitions, people who take their politics seriously would do well to consider the fact that voter turnout fell sharply from 2008 to 2012 and determine why that occurred.  I think the answer is simple:  Americans turned out to vote for change in 2008 and turned out again to vote for change in 2010 — and no change occurred.  They watched an endless Republican primary season that blended into an endless campaign.  They suffered through a barrage of negative ads and outright demonization and distortion of the opposing candidates, and they decided they had had enough and just weren’t going to waste their time any more in a process that seems to occupy huge amounts of time, attention, and money without achieving anything.

If our political leaders of both parties don’t figure out how to work together to address our looming problems, and we see only more years of pointless partisan bickering, don’t be surprised if the 2014 and 2016 turnouts continue the downward trend.  Americans not only won’t vote, they won’t care.