On Monday former Congressman Anthony Weiner was sentenced to spend 21 months in federal prison for sexting with a minor.  He broke down and cried when the sentence was delivered.  Weiner, who had pleaded guilty to the offense, also was fined $10,000, will have to register as a sex offender, and will be subject to three years of supervised release after his prison term ends. 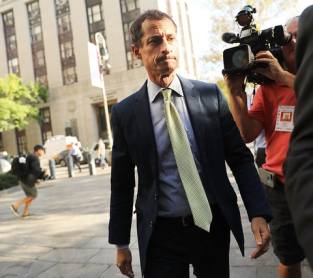 Weiner’s lawyers had argued that he should receive only probation, contending that the case involved unusual facts and circumstances and that Weiner had made “remarkable progress” through participation in a treatment program for the past year.  After the sentence was announced, the lawyers contended that the punishment was more severe than it had to be.

The federal judge explained her sentence by noting that sexting with a minor is “a serious crime that deserves serious punishment.”  She added that Weiner’s notoriety was an significant part of the sentence — because people have paid attention to his conduct and his case, the sentence provided an opportunity to send a message that could change lives.  And Weiner could have received even more prison time.  The offense to which he pleaded guilty carries a maximum prison term of 10 years, and the sentence imposed by the judge was at the low end of the range suggested by federal prosecutors.

I think the judge got this one exactly right.  Weiner’s record of repetitive misbehavior shows an escalating pattern, and his conduct with the 15-year-old girl was reprehensible.  And it is important to use the sentence to send a message, on several levels — it not only notifies people that sexting with a minor will be sternly punished, but also shows that the politically powerful are subject to justice to the same extent as the rest of us.  In a time when politicians seem increasingly to live in their own secure little bubbles, distant and disconnected from the real world, the message that they will be held accountable for their illegal actions is an especially important one.