In case you haven’t heard, there’s a curious measure on the California ballot this November.  The proposal would split California into three different states that would be separately governed.  The last time that happened with an existing state was 1863, when loyalist West Virginia broke off from secessionist Virginia during the Civil War.

The ballot measure was spearheaded and funded by a venture capitalist who apparently has made it his life’s mission to break California up.  Previously, he tried to split the state into six parts — which he now thinks was just too many for voters to stomach.  “This is a chance for three fresh approaches to government,” he told a newspaper in an interview.  “Three new states could become models not only for the rest of the country, but for the whole world.”

When I was out in California recently, I asked some people about the ballot measure and what they thought.  I didn’t find any proponents, but did find people who were worried less about becoming models for the world and more about practical things — like water, which is a pretty scarce commodity in what would be “Southern California” and is primarily supplied by “Northern California.”  There also would be challenging questions involved in allocating infrastructure and accounting for its cost.  And the people I spoke to also indicated that they like the Golden State the way it is — a big, sprawling, incredibly diverse state that offers lots of different climates and geographical areas and encompasses some of the country’s most iconic cities.

Even if California voters pass the measure, the break-up apparently would need to be approved by Congress, which would be no sure thing.  It’s not at all clear that other parts of the country would want to add four new Senators from the west coast — or two more stars to the national flag.  Fifty is a good, round number.  52?  Not so much. 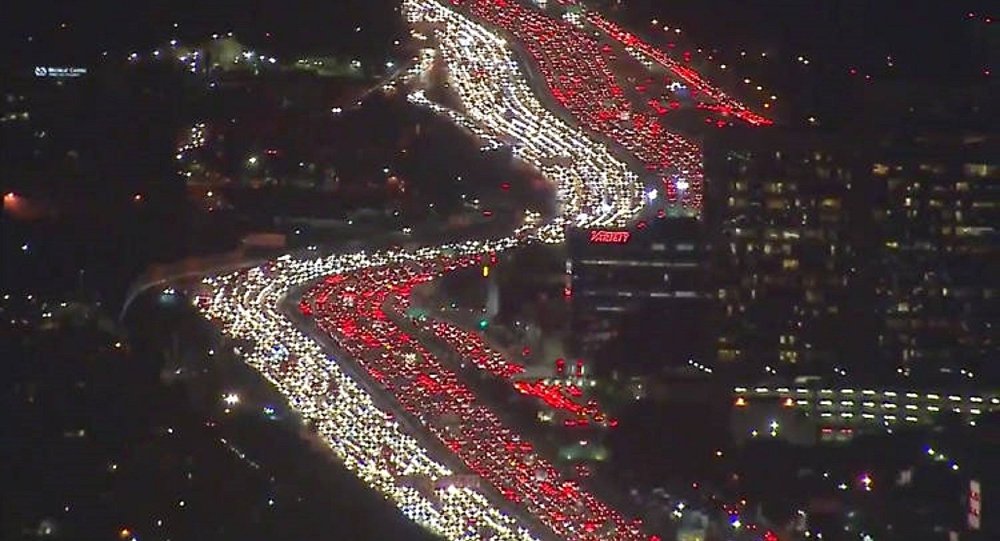 We all have things to be thankful for this Thanksgiving.

The above photo, taken by a news helicopter last night, and the accompanying news story about the worst holiday traffic jam in SoCal history made me realize that I have three more things to be thankful for than I was even aware of:

1.  I’m not stuck in a car on “the 405,” breathing exhaust fumes and trapped forever in angry, soul-deadening gridlock.

2.  I don’t have to drive to some faraway location this Thanksgiving.  In fact, I may not need to drive at all.

3.  I don’t live in southern California.  Sorry, all you people out in LA and thereabouts:  I just don’t see how you can stand the traffic.  What passes for a traffic jam in Columbus would be viewed as a pretty good day on Golden State freeways.

It’s raining here in Columbus this morning, just as it does virtually every day in April.  I can hear the patter of raindrops against windowpanes and the rumble of thunder rolling from east to west.  These deeply familiar sounds are symbols of what Ohio and the Midwest has in abundance — fresh water, pouring down from the skies, puddling on sidewalks, sluicing down streets to storm drains, and rushing into roaring rivers and streams.  We check the forecast, grab umbrellas and don raincoats, and mutter about another rainy day.

But what we mutter about, southern California craves.  An area that always has been water-challenged is now water-deprived, as it experiences another year of punishing drought.  Water, the most basic building block of life, will be rationed in southern California, by edict of Governor Jerry Brown and the Metropolitan Water District of Southern California.  Los Angeles will have to cut consumption by 20 percent, and other communities will have to reduce use by 35 percent.  It’s as if the people of SoCal were living in a castle under siege — except it’s Mother Nature who is employing the siege tactics.

None of this is surprising for the residents of southern California, who have been hearing about dwindling water supplies for years.  But officials have noticed an odd phenomenon — as the water supply crisis has become more dire, some people in southern California are increasing their use of water.  Presumably those people have concluded that water restrictions are coming, anyway, so they might was well take an extra-long shower or increase their lawn sprinkler use before the restrictions arrive.  And that apparent “what the hell” attitude has caused the water regulators to argue that they have no choice but to impose mandatory restrictions and punitive charges on water users who exceed the limits.

It’s not entirely clear how the restrictions will affect individuals, yet.  There’s probably no risk of jackbooted water police ripping out sprinkler systems or kicking in the doors of home to install low-flow shower heads, but the people of southern California ultimately will have to accept the inevitable conclusion that there are too many people, animals, and plants in the region in view of the limited water supplies.  Heavily watered green lawns will be replaced by native desert plants, showers will be dribbles rather than blasts, and parks and common areas will have to change.  And the people involved in California’s enormous agricultural sector will have to figure out how to make do with less H2O.

Ultimately these restrictions are the price that must be paid when too many people decide to live in a desert.  Who knows?  Maybe some of those people, tired of feeling dirty and looking at brown surroundings, may decide to relocate to places where steaming showers and green grass are the norm.  Golden Staters, you’re welcome here in the Midwest.

There was an earthquake in southern California last night. The earthquake was a 5.1 in magnitude, causing merchandise to fall off the shelves of stores — and, no doubt, causing Californians to wonder whether it was the first little tremor in the Big One that every resident of the Golden State quietly fears may someday be coming. The precariously lodged tectonic plates of the San Andreas Fault shift, the ground moves, and as the world rumbles, for a cold split second, everyone wonders how long it will last and how bad it will be. Then it is over, and life goes on.

I’ve only felt an earthquake once, and it was small tremor that touched Columbus from a epicenter that was far away. I can’t imagine what it would be like to feel the ground slithering and grinding before my feet. It must be a strange sensation — and also one that you just come to accept as a risk of living in California or one of the other earthquake zones in the world. Some of the world’s most beautiful places pose risks of hurricanes, or mudslides, or earthquakes, or floods, or other natural disasters. If you live there, it’s part of the tradeoff.

If you go to the earthquake page of the U.S. Geological Service, you see that earthquakes and aftershocks are commonplaces in California. Each of those incidents would be deeply memorable, long-discussed events for those of us in the solid-grounded Midwest. How many of our friends in California even notice all of them?