Our days often begin with a review of our email boxes to delete the spam. The other day, as I was performing this mindless chore, I wondered: why are random, unwelcome emails (and now, phone calls too) called “spam”?

Even though the internet and email are recent developments in the arc of human history, the true origin of “spam” to refer to unwanted emails seems to be lost in the mists of time. “Spam” apparently is not an acronym, nor is it some kind of direct slam on the canned meat of the same name that is produced by the Hormel Foods Company and is evidently beloved in Hawaii. Instead, the most plausible explanation I’ve seen is that, in the very early days of the internet, undesired email was called “spam” as a reference to the Monty Python spam sketch, in which a diner menu recited by a waitress features multiple dishes made with spam, a gang of Vikings sing a song about spam, and a fed-up British matron is forced to confess that she doesn’t like spam.

Some claim the term “spam” was first used to describe email in 1993, when an early email user mistakenly sent multiple copies of the same email message; others say it dates back to the ’80s. In any case, the fact that there is a lot of spam email (like the spam-oriented dishes on the diner menu) and the spam email is not appreciated (like the diner patron who doesn’t like spam) seems to have been the connection that gave spam email its name.

Language is interesting, and “spam” email is a good example of why. In this instance, some early email user was a Monty Python fan who thought of the connection to the sketch and attached the name, it stuck and was used by early internet users, and then it spread to become the common term used by your iPhone, the filters on your computer, and the world of email users at large. It’s short, it’s as good a name as any, and if you’ve watched that classic Monty Python sketch, you know it’s apt. Like the high-pitched, purse-clutching English lady, we all “don’t like spam“!

It was beautiful in Columbus today — bright and sunny, with temperatures that touched the 80s.  It was so nice that the Bus-Riding Conservative and I decided to venture out for lunch and check out some of the more recent editions to the downtown food scene. 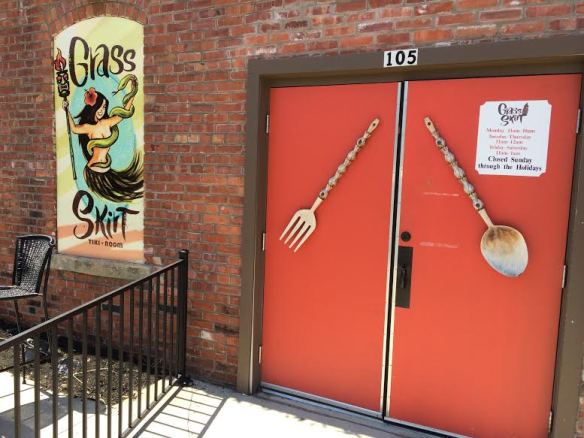 We strolled a few blocks east on Gay Street, turned north on Grant, and ended up at the Grass Skirt Tiki Room next to the Hills Market.  I’d heard some good things about the proprietor, who runs the Surly Girl Saloon in the Short North, and also heard that the Grass Skirt features some of the fabulous, kitschy Polynesian bric-a-brac previously found at the fabled Kahiki Restaurant, which was a Columbus landmark.  The part about the Kahiki decor was true — at least, I’m assuming they got the big wooden masks and outsized spoon and fork from there — but the Grass Skirt offers some great food, too.

The BRC and I sat outside in a pleasant eating area right next to the Hills outdoor dining plaza and enjoyed the sun’s rays while wolfing down our chow.  I got the spicy peanut pasta with grilled chicken and it was marvelous — vividly flavored and just hot enough to induce a light sheen of sweat on the forehead.  The BRC raved about his dish, which featured grilled Spam.  The menu had lots of other enticing options from sandwiches to noodle fare to rice bowls.  We quickly vowed to return for more.

The Grass Skirt is a welcome addition to the downtown dine-around and fills one of the ethnic food slots — Polynesian, Pan-Asian, and of course Spam-oriented — that has been unfilled until now.  The next time we might just get a beer or a Navy Grog, because no Tiki Room is complete without a full array of debilitating rum-based drinks.

Thanks to the BRC for taking the picture and joining me today!

Every city has a “bad neighborhood” — a squalid, dark, depressed area where sullen people are roaming the streets and the unwary stranger can easily be the victim of crime.  It turns out that the internet is the same way.

A Dutch researcher tried to determine if there are patterns to the generation of malicious email used in spam, phishing, and other fraudulent scams.  It was a huge task, because there are more than 42,000 internet service providers worldwide.  The researcher found, surprisingly, that about half of the malicious email that is the bane of modern electronic communications comes from just 20 of the 42,201 internet service providers.  The worst “bad neighborhood” was in Nigeria, where 62 percent of the addresses controlled by one network were found to be sending out spam.  Other cyberspace skid rows were found in India, Brazil, and Vietnam.

The hope is that the study will allow internet security providers to better understand the sources of malicious email and further refine filters to try to block the efforts of spammers and fraudsters.  It’s a worthy goal, but I’m not holding my breath.  There have always been people who would rather hoodwink people than earn an honest living, and the internet has provided them with a vast new arena in which to ply their criminal trade.  If they can’t use that “bad neighborhood” in Africa, they’ll just find another “bad neighborhood” somewhere else.

Today, however, there was a spam comment that touched my heartstrings.  In a non sequitur response to a wholly random post, it read:  “I know this is a off topic but i wanna share you about skin care. Acne can cause depression and embarrassment. This can be due to acne scars left on the face or perhaps in any area affected. This might be due to wrong treatment or lack of treatment. It’s usually advised to remedy acne instantly to prevent severe acne problems. This could also avoid spending more money, effort and time to get the desired result from treatments.”

My first reaction was defensive.  Of all blogs, why is this acne ad being sent here?  Do I have some kind of lingering, post-high school reputation for having a bad complexion?

Then I thought:  How true!  Let’s face it, acne blows!  If you were a kid a who had acne during high school, you know how it made your life a living hell.  You dreaded being called pizza face, and spent hours in front of the bathroom mirror, applying the Clearasil or other off-the-shelf remedy and hoping that the Zit God would grant your prayers and leave your skin clean and fresh as a baby’s for the high school prom.  Of course, that didn’t happen. We went to the prom, zits and all, and hoped that our date wouldn’t care and that airbrushing would take care of our imperfections in our senior class photo.

For most of us, acne ended with adolescence.  Just think of how it would suck to have raw, bursting pimples as an adult!  And that’s why I couldn’t just cold-heartedly delete the spam.  If you’ve got adult acne, for God’s sake — get help!  No one should have to deal with the insecurities of high school more than once.

WordPress, which publishes our humble blog, provides a program that detects “spam” comments and segregates them from apparently legitimate comments.  Every once in a while you need to go into the spam folder and clean it out.  That is one of my jobs.

Most spam is self-evidently spammy.  The less inventive spam will just give a reference to a sex website.  Other times the would-be spammer tries to write something sufficiently generic that you conceivably might think it was written about your posting — if you were desperate enough for comments.  Here’s an example:  “Thanks a lot for sharing this with all people you really understand what you’re speaking about! Bookmarked. Kindly additionally talk over with my site =). We will have a link change contract among us.”  Huh?  Like this example, most spam probably was originally written in Croatian and then translated, badly, into English.  The words are familiar, but the sentences may as well have been written by chimps randomly stringing words together.

I always think of the classic Monty Python spam song as I am doing my spam deletions:

The volume of global spam has fallen precipitously in recent months.  According to the security firm Symantec, the volume of spam has fallen from more than 200 billion spam emails per day in August to “only” 50 billion spam emails per day in December.  Of course, 50 billion bits of spam is still 50 billion bits too many.  Still, it is nice to see the numbers drop.  Spam is a good example of how louts can take advantage of a great idea like email and ruin it for everyone.

Experts are wondering what the cause of the drop in spam volume might be and are speculating about whether the decline is permanent.  They wonder if the big-time spammers have stopped because they’ve been arrested, or if regulations have made spamming too difficult and risky, or if the “botnets” that send a lot of the spam have been disabled somehow, or whether spammers are turning to some new campaign.  The reality is, nobody knows.

I wonder if the answer isn’t simpler:  the market is so saturated that spamming just isn’t economical anymore.  After all, is it possible that any red-blooded male hasn’t heard about Viagra or the various options for lengthening and thickening body parts?  Could any person with a computer not be aware of the many simple, no-pain ways of losing weight or quitting smoking, or the satisfying miracle of electronic cigarettes?

According to the “invisible hand” theory of market economics, when supply vastly outstrips demand economic forces will work to bring supply and demand into some kind of equilibrium.  In this instance, the invisible hand may have stopped using the mouse to click on those intriguing “male enhancement” options, and spammers have been forced to look for other lines of work as a result.