On our last full day of spring break we decided to spend our time enjoying the vibrant flowers that have made this year’s vacation destination so special. The flowers here are remarkably vivid and bright, and it is especially enjoyable when the locals fashion them into pretty garlands that grace the native woodworking and other items made by local artisans. Just down the street is a market that sells the handmade work of master craftsmen who specialize in woodworking, pottery, and tapestry. If only we had such creative artistry at home!

Of course, the social whirl is a key part of the whole spring break experience.  When the cocktail hour — liberally defined, of course — rolls around, it’s important to interact with your fellow spring breakers.  The crowds and partying give the spring break traveler an excellent opportunity for people watching while enjoying a tropical adult beverage served in a festive setting.

This year’s spring break destination has all of that, and more.  We had to elbow our way in to the overcrowded bar to get served, and then were incredibly lucky to find an open table where we could enjoy the sunshine, listen to the loud hip-hop music that had some guests on their feet and dancing, and watch the crowds go by.

Today Kish and I decided to get in touch with nature at our spring break destination.  And what better way to do so that to take a nature hike and try to get a glimpse of the elusive local wildlife?

These cute critters are hard to find, and almost as camera-shy as the mythical Sasquatch.  Fortunately, some careful hunting allowed us to take a rare photo of this species, which typically tries to avoid any and all human contact.  After luring this plump little fellow with an acorn, we were treated to the pleasant spectacle of him cavorting and gamboling in the virgin wilderness with his furry tailed friends.  This must have been what life was like back when this area was not despoiled by resort developments and the depredations of modern civilization!

We’ll always treasure the photo of this friend in the forest and look forward to sharing it with our friends when we return home after this year’s wonderful spring break.

Spring break shouldn’t be all about getting sun, relaxing, reading, and soaking up flavorful tropical beverages.  In my view, it’s also important to explore some of the native culture in your spring break locale and broaden your horizons.

Fortunately, our spring break destination this year has many intriguing cultural artifacts that can serve to stimulate the imagination.  Today we took a guided tour of some of the curious items left behind by past civilizations.  From our review of the two items pictured above, it appears that the early humans in this location worshipped frogs, among other creatures in the pantheon of their gods.  Archaeologists theorize that the two frogs represent male and female deities, and some kind of ancient fertility ritual, and that the dish balancing on their heads might be an altar where small animals were sacrificed as part of ancient religious rites designed to bring about more bountiful  harvests.

The carefully crafted sculpture of the dog, on the other hand, has puzzled historians.  Some theorize that the dog is part of the ancient civilization’s creation myth, in which a gigantic dog god unearthed the first humans from underground.  Others maintain that the close proximity and juxtaposition of the dog figure and the frog figures indicate a linkage between those gods and their function in the ancient culture — and perhaps that after creatures are sacrificed on the altar, the dog buries them as part of the death rituals celebrated by local shamans.

It’s great to get some culture on spring break!  With exposure to artifacts like these, I feel like I will return from this sojourn more worldly, and wiser, than when I left.

It’s always important to be sure to get some exercise, even when you’re on spring break.  Fortunately, our destination this year offers ample opportunities for walking, jogging and hiking.  This morning we decided to stimulate our appetites by taking a brisk, pre-breakfast walk on the quaint, scenic, flagstone-covered hiking trails.

The morning’s hike gave us the opportunity to examine some of the exotic, brightly colored local plant life and enjoy the merry chirping of the songbirds that seem to naturally cluster at this vacation paradise.  We also admired the workmanship of the native artisans who carefully cleared and built the hiking trail, as well as the distinctive and picturesque wall surrounding the facility.

With our appetites fully stimulated by the morning’s exercise, we went back inside to eagerly await the opening of the ample yet rustic brunch that is a trademark of our resort.

One of the fun things about spring break is checking out your destination.  Today I’ve been exploring the grounds of our spring break 2020 location.  There’s lots to see and do as we get better acquainted with the amenities that are available.

The photo above is of a kind of reading room, with some impressive artwork, tasteful decorations, an old-fashioned fireplace, and very good natural lighting from the picture window.  We’ll be checking this room out after 5 p.m., when the proprietor advises that cocktails, a selection of wines, and light hors d’oeuvres, consisting mostly of cheese and crackers, will be served to all guests.  There’s also the chance that someone might try tickling the ivories on the upright piano for a little singalong fun!

Our spring break destination this year is pretty sweet. It’s got a nice patio, a fire pit and supply of firewood, a cool sculpture, and a brightly colored umbrella to shade us from any sun that might appear. According to the proprietor, you’re permitted to take a beer or glass of wine out there, too.

We’ve spent the last few days in Naples, Florida, and yesterday we visited the beach. It’s a beautiful beach, looking westward toward the green waters of the Gulf of Mexico, and on a bright, sunny day it was jammed with sun worshipers, beach chairs, umbrellas, kids, floats, beach towels, noodles, beach walkers, coolers, and assorted beach-going brick a brac. Near the public access points the beach was so packed with people that a claustrophobe might actually have felt a twinge of anxiety.

It gave us a taste of spring break Florida, family edition.

Yesterday morning Kish and I took an early morning flight, heading south. Of course, it’s March — which means we’re in the midst of the spring break period for local schools. Not surprisingly, the boarding area was overrun with little kids. I’d estimate that a solid third of the passengers of the plane was children — and, because they were leaving early on spring vacation, let’s just say they were a bit . . . excited.

That’s right — we were on the Hyped-Up Rugrat Express.

When you’re not around little kids all the time, you forget what it’s like. Like, how some parents feel the need to talk through every part of the trip. (“Pay attention, Johnny! We’ll be taxiing our to the runway now.”). Or, how much little kids talk, and how loudly. Or, for that matter, how many times a kid can say “Mommy” on a two-hour flight. (The correct answer, based on the little boy sitting in front of us, is 2,435.)

One positive: no back of the seat kicking. As Hyped-Up Rugrat Expresses go, it therefore wasn’t that bad. 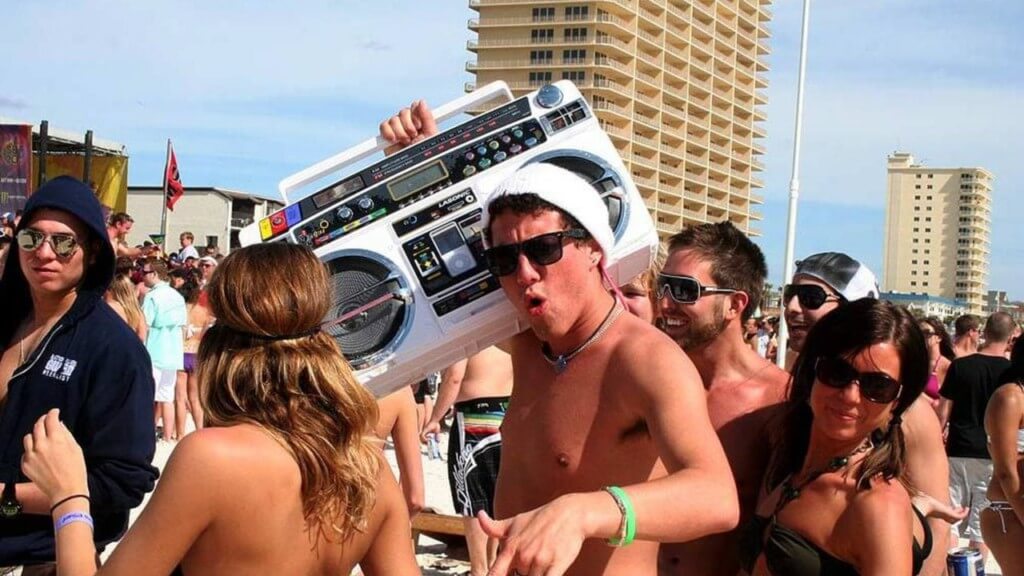