Kish and I continue to watch Treme, the new HBO series on post-Katrina New Orleans.  We’re hoping to find something that grabs us.  So far, our overwhelming reaction is that virtually none of the characters is particularly likable, whether they are behaving irresponsibly, bloviating about how great New Orleans music and culture are supposed to be, or looking concerned about how their beloved city is responding to a colossal disaster.  I know we are supposed to be rooting for these folks, but it really isn’t easy.

The character we most despise is Davis McAlary, a shrimpy, soul-patched loser who can’t hold a job.  McAlary is an insufferable musical snob who thinks he is just about the coolest guy ever to pulse along with one of the music at one of the New Orleans parades that seem to occur every day.  In the most recent episode, McAlary unwisely used the “n” word in a bar and got a punch to the chops to commemorate his stupidity and cloddish insensitivity.  What does it say about a character when you wish he would have been decked again?  I don’t know if McAlary is supposed to be detestable, but if so Steve Zahn, who is playing him on the show, deserves an Emmy.

We’re sticking with Treme for now, but five episodes in I have to say it has been a disappointment.

Over the years, Kish and I have loved many of HBO’s series.  The Sopranos, Deadwood, and The Wire are some of the finest TV programs ever made.   So, we looked forward with tremendous anticipation to Treme, a show made by the creators of The Wire and set in New Orleans only a few months after Hurricane Katrina. 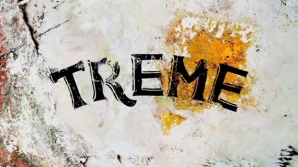 Let me begin by making an admission that fatally undercuts the credibility of everything else I am about the say:  I have not been able to stay awake through an entire episode yet.  I start with great intentions and commitment, get energized by some terrific New Orleans music, and then after watching a bunch of seemingly random characters move without apparent purpose through the extremely depressing, brutalized post-Katrina landscape, I doze off.  It’s embarrassing to admit, but maybe it also says something about the show’s pace.  I never nodded off during The Sopranos or The Pacific.

There are things to like about Treme.  I admire Wendell Pierce and Clarke Peters, the very talented actors who play, respectively, Antoine Batiste and Albert Lambreaux.  Pierce is a very convincing and likable trombone player who obviously has a musician’s commitment issues; Lambreaux plays a sad-faced, commanding figure I haven’t quite figured out.  I like the idea of having long scenes that include some excellent music, although at times those scenes don’t fit too well with the flow of the show.  Some of the show’s characters — like the angry professor played by John Goodman — are a bit over the top, but I am giving them the benefit of the doubt because they obviously have been deeply scarred by the sight of their city brought to its knees by a horrible catastrophe.

One thing I can say with assurance, based on the portions of the two episodes I’ve watched before drifting off into the Land of Nod.  Davis McAlary, the appalling goateed DJ played by Steve Zahn, is the most annoying TV character I’ve every watched.  He seems to have no redeeming qualities whatsoever.  He is a slob.  He is a rude and mean-spirited neighbor.  He is an arrogant liar.  He is a looter and a thief.  He drinks the most expensive wine at his girlfriend’s restaurant without permission or compensation.  He has temperamental outbursts when asked to play songs from a playlist.  He bugs people like Elvis Costello who are trying to watch a nightclub show in peace.  Are we supposed to like this jerk or find him interesting?  I sure don’t.  I can’t imagine why his chef/restauranteur girlfriend wouldn’t kick his sorry ass to the curb in a nanosecond, or why Elvis Costello wouldn’t bitch-slap him for telling obvious falsehoods about his musical abilities.  In my view, when that character is on the screen he sucks the wind out of the show every time.  Couldn’t a corrupt FEMA official take him out and do us all a favor?

We’ll keep watching, because I think the show has obvious potential — but it is a slow start so far.  Right now, my short-term goal is just to watch an episode through to its conclusion without being overwhelmed by slumber.