Normally my autumn Sundays are pretty regimented.  I play golf in the morning, get home and have lunch, then watch the Browns.  By the time the Browns have lost — again — it’s just about dinner time, and the day is close to being done. 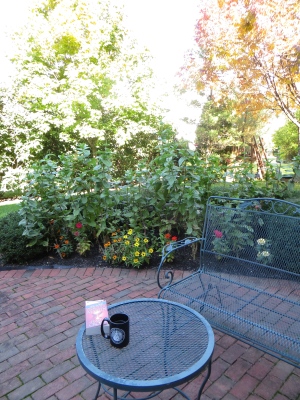 Today is different, however.  The golf course is closed for a special tournament.  The Browns have already played — and lost — so four hours that would have been spent in speechless rage and agony are now available for more pleasant pursuits.  As a result, a day that is typically heavily scheduled has no schedule at all.  The sense of liberty is exhilarating.  It’s a free day, one where I can do whatever I want.

So far this morning I’ve done some chores and caught up on various tasks that have piled up during the busy period.  Now the chores are done, the tasks are completed, and it’s time to enjoy myself.  Nothing sounds better than camping outside, enjoying the cool weather, bright sunshine, and autumn colors, sipping on a steaming cup of black coffee and digging into my book.

The patio beckons, and its allure is irresistible.

You are a kid on a Sunday morning in the 1960s.  It is winter and brutally cold outside, and doing something inside seems like a good idea.  You flip through the brilliantly colored comics section of the Sunday paper, and there you find your perfect companion — Cappy Dick.  Cappy Dick, the chuckling, patient, pipe-smoking sea captain who every week urged kids to “try for these great prizes!” and proposed all manner of odd games and activities for bored rug rats.

Cappy Dick was all about the art of the apparently possible.  It suggested different things that you could try.  They looked like they could be done — hey, it wouldn’t be in the paper if it was fake, would it? — and in any case it looked like it would be fun to try.

Never were egg cartons put to so many different uses!  You could take the carton, paint each egg-holding indention a different color, and toss bottle caps or pennies into them, with each successful throw generating different points depending on color.  You could learn how to make a successful flip book, or convert a shoe box into a crude castle, or make puppets out of clothes pins.  When Cappy Dick spurred your imagination, the blunt-edged scissors, Crayola crayons, and construction paper got a serious workout, and the smell of Elmer’s glue was intoxicating.  And when you were done, your hands crusty with Elmer’s glue residue and the kitchen table littered with scraps of paper and other odds and ends, you realized that trying to make something had been fun, even if the results didn’t quite look like Cappy Dick showed.

I’m sure parents of that era rolled their eyes from time to time as an excited youngster charged up, babbling about needing an empty round Quaker’s Oats container to try to make a gaily colored Polynesian drum.  But surely Moms across the land appreciated anything that would keep the kids occupied in some kind of quiet creative exercise for a few hours on a Sunday afternoon, even if a bit of clean-up would eventually be required.

No doubt video games, elaborate plastic Barbie houses, and other ready-made modern toys spur some kind of creative impulse as kids play.  I wonder, however, whether the creative opportunities are not quite as rich as when kids gathered around the kitchen table and worked hard to make that Indian headdress or Pilgrim bonnet, laughing all the while.  Cappy Dick helped to fill many a dull afternoon, and it may have made kids of that generation just a bit more willing to at least try.  After all, you could win Great Prizes!