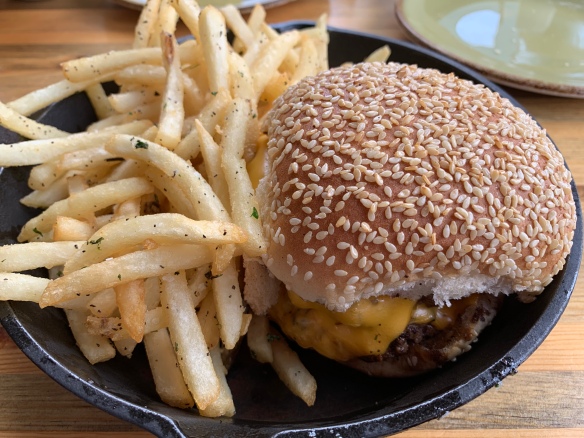 Kish and I were up in Cleveland yesterday and stopped for lunch at Punch Bowl Social on the east bank of the Flats. When I got my cheeseburger I found that every square inch — no, every square micrometer — of the top of the bun was covered with sesame seeds. I’ve never seen a hamburger bun with such a complete and thorough sesame seed coverage.

I was worried that each bite would send seeds flying across the table, but my fears were groundless. The seeds held to the bun and the awesome number of seeds added a very satisfying crunch and consistency to the burger. With two patties of beef, and served piping hots and sesame-laden, it was one of the best burgers I’ve had in a long time.

Some of the high-end burger joints have moved away from sesame seed buns to sourdough buns or ciabatta buns or other options, but the Punch Bowl Social burger shows what some serious shots of sesame can add to the cheeseburger experience.

I love all of the bridges of The Flats, but on a sunny day with bright blue skies I love the blue bridge best of all.

Who knew there were rowers on the mighty Cuyahoga?  It was a beautiful morning to be the wide River as it wends its way down to Lake Erie.

Kish and I took a roundabout walk through downtown Cleveland today.  It was a beautiful, cool, bright spring day, and our little walk showed some of what Cleveland has to offer — and also some of the challenges it faces.

In downtown Cleveland they are slowly tearing down one of the colossal bridges that spans the Flats.  The steel girder skeleton has now been exposed, and it looks exactly like something we would build during childhood with an erector set.

It’s interesting to see the disassembly process, but a bit unnerving, too.  The criss-crossing pieces of steel look very flimsy and delicate when they are laid bare, and it’s hard to imagine they bore so much weight for so long.

“The Flats.”  It’s been the name for the heavy industrial area around the Cuyahoga River, next to downtown Cleveland, since time immemorial.

“The Flats.”  The moniker is apt.  The topography is low and level, perfect for unloading barges and freighters and running railroad track to haul the ore and coal and other raw materials off to Lorain and Youngstown, Akron and Dayton.

It once must have been an extraordinary, crowded bustling place, one of the engines of the American industrial age, chock full of shouting men and whistles, pallets being hoisted into the sky and swung wide, carts and rail cars rolling ponderously past, pellets and cinders and smoke and dust.

“The Flats.”  It’s an area that has been squashed and crushed by countless heavy loads and heavy machines.  Now it’s been left prostrate and depressed by economic forces beyond its control, empty and desolate on a Sunday afternoon, with only seagulls circling overhead, crying out to the scudding clouds.

The Flats.  It’s still there, with its many special bridges that lift far above the water to allow the freighters to glide slowly by, its rusting railroad spurs, its loading areas and piles of slag and cracked, weedy concrete and brick and highway overpasses that loom far overhead.  It served before, and it could serve again.

If you want to get a sense of how the wheels of commerce turned back at the turn of the 20th century and how things have changed since those long ago days, the Flats is a good place to visit.

In my stroll through the Flats area of Cleveland early Wednesday morning, I was struck by this view of the shoreway bridge spanning the Cuyahoga River and the gravel yards and industrial facilities along the riverbed.  The bridge, which has been painted bright blue, is a gigantic construct when viewed from below, but it nevertheless has a kind of graceful, spidery beauty as it curves away into the distance far overhead.

Bridges and other well-designed forms of municipal infrastructure can be as artistic and lovely as the most high-priced piece of public art. 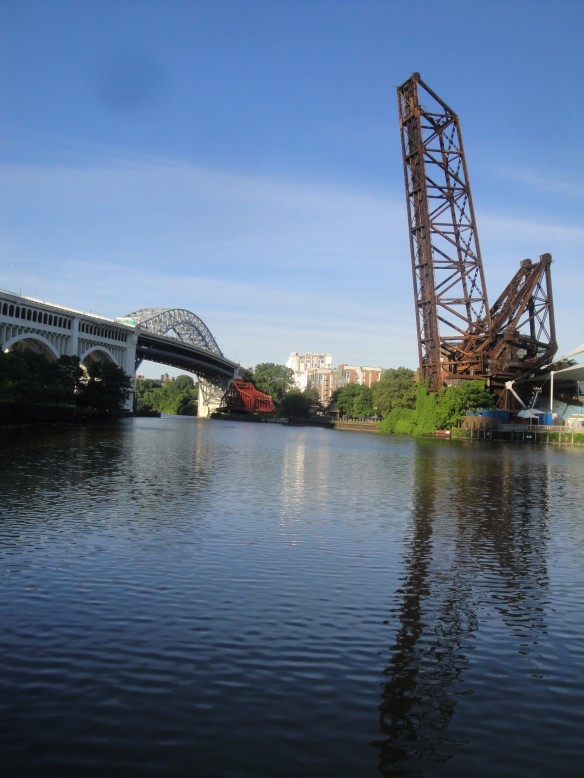 This morning I went for a walk down in the Flats area of Cleveland, as the sun was rising.  The Flats is a good place to appreciate the muscle and sinew of a big American city that is just waking up and getting ready for the day.