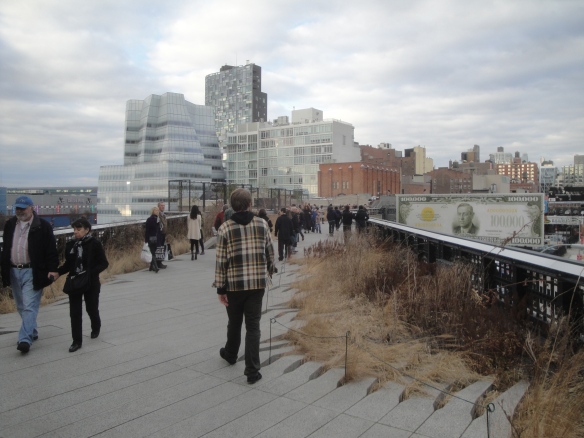 The other day we visited The High Line park, located on Manhattan’s west side. It is one of the coolest, most interesting parks I’ve ever seen.

The High Line is a park built on an abandoned, elevated freight line.  When you walk the park you are strolling along a path several stories above the ground.  The railroad tracks — which are still visible in certain parts of the park — have been supplemented by walking paths, the areas around the paths have been planted with different greenery and grasses, and at different points the park features unique bird feeders, seating areas, and plenty of good photo opportunities, including fine views of the top of the Empire State Building in the distance.  It is wonderful to be able to walk unimpeded by surging traffic and rocketing yellow cabs and jostling crowds and appreciate the interesting vistas offered by this little corner of New York City.

The High Line winds its way from New York’s meatpacking district to West 30th Street, moving past businesses and residential buildings.  You stroll past rooftops, warehouses, billboards, office spaces, backyard grilling areas, and other urban scenes.  It is a whimsical journey, to walk so far above the streets of New York, and at least some of the people who live in the neighboring buildings — including the folks who put up the painted window scene at left — have recognized it and treated it as such.

What a great idea this park was!  It took what was a rusting, derelict structure reflective of urban blight and converted it into a gem of a park that attracts visitors and attention to the neighborhood and has brought restaurants, bars, and residents to the area.  The High Line is owned by the City of New York and maintained and operated by the Friends of the High Line.   If only every city government and civic group were as creative and far-sighted in deciding how to deal with aging city structures!