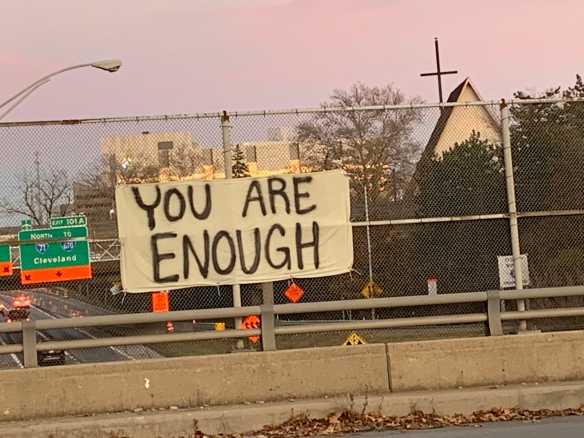 The Third Street Secret Signer has struck again, but this time the resulting message is a bit more cryptic — thanks to some bad luck.

For the first time, the TSSS has used both sides of the bridge, east and west. (The east side, which has no sidewalk, was previously functionally inaccessible because of the constant flow of traffic speeding onto the 70/71 on ramp, but that ramp is now closed.) The east side sign reads “You Are Enough,” which is apparently the title of a recent book for women. On the west side, which is the TSSS’ previously preferred sign-posting location, the TSSS had put a sign reading “You Are Valuable,” but by the time I walked home last night that sign had fallen down and lay crumpled on the sidewalk. I’m hoping the sign was just blown down, rather than being pulled down by some Grinchy jerk who is messing with the public positivity campaign of a Good Samaritan.

Even with the west side sign fall, I’m sure I’m not alone in appreciating another nice gesture by the TSSS. Hopefully s/he will take the remaining sign to heart and realize that their single sign effort is “enough” to give us a holiday boost heading into Thanksgiving. 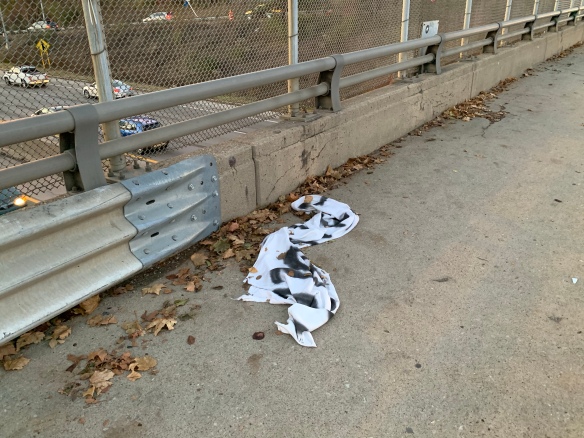 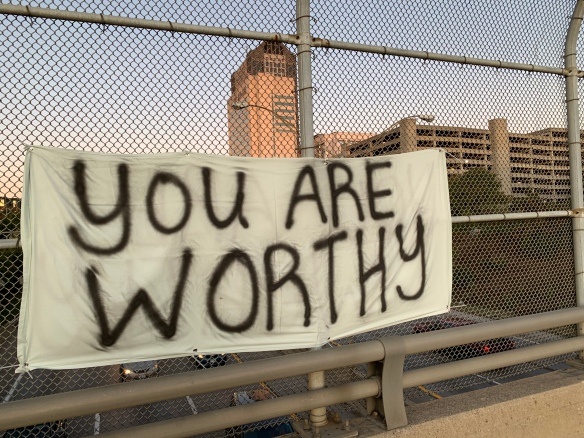 Our anonymous Third Street Bridge sign artist has struck again.  When I walked by yesterday morning, I saw that the latest hand-lettered sign channels an inner Stuart Smalley, the fictional character played by Al Franken on Saturday Night Live years ago.  You may recall that the mild-mannered, sweater-wearing Stuart gave a Daily Affirmation with a positive message that always concluded:  “I’m good enough, I’m smart enough, and doggone it, people like me!”

I’d say that “You are worthy” falls squarely into the Stuart Smalley mindset.  (Those of us who don’t share Stuart Smalley’s hopeful and constructive world view might ask, in response, “Worthy of what?”  But never mind that.)

It’s nice to know that some unknown person cares enough about the well-being of their fellow Columbusites to create inspirational messages to help us feel good about ourselves and spur us forward on our days.  I’m looking forward to the next sign that helps to put a spring in my step on the way to work. 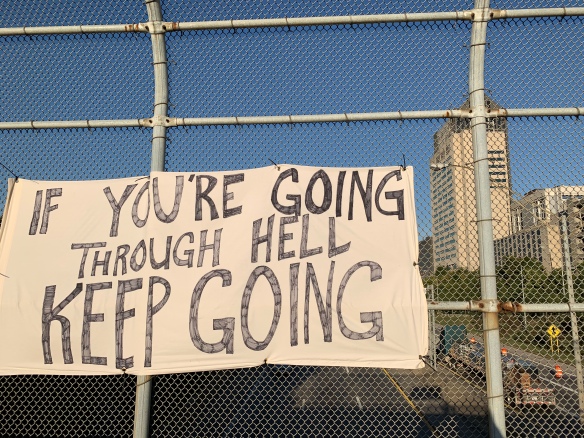 This sizable, hand-lettered sign appeared yesterday on the Third Street bridge that links German Village to downtown Columbus.  At first I thought the sign might be referring to the typically snarled traffic on the bridge — because bad traffic sure can seem like hell — then figured it was just some general encouragement for anybody who might be facing a tough patch in their lives.  Since I was heading into work bright and early on a beautiful Sunday morning, the sign had some resonance for me.

What would motivate someone to create a sign like that, and post it on a fence on a public thoroughfare?  I can only guess, but I thought it was nice to know that somebody cared enough about their fellow humans to fashion and display a generally applicable message that might give complete strangers a boost.

The quote on the sign is often attributed to Winston Churchill, but there’s serious question about whether he ever said it.  Regardless of its source, it’s a useful thought to keep in mind when the super-busy or difficult times roll around.  I was grateful to the anonymous sign creator as I walked on to work. 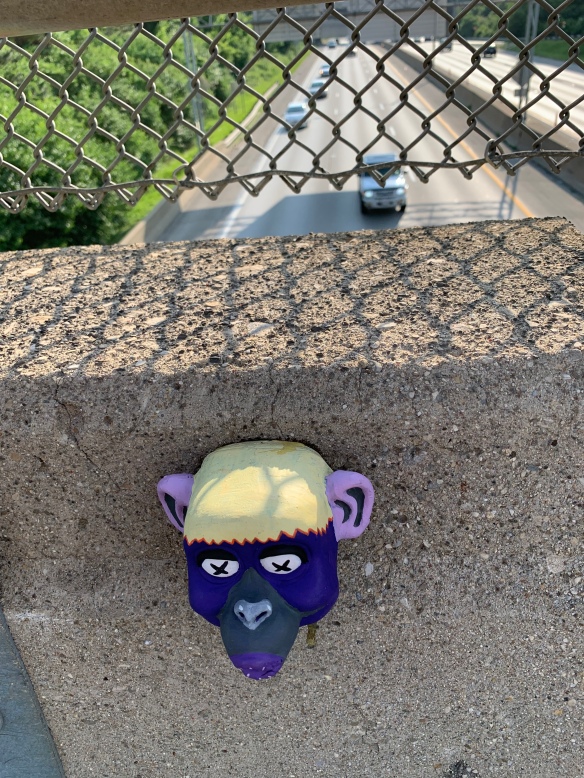 When you walk to work, moving to and from the office at a deliberate pace, you notice things that speeding drivers simply don’t see — like this curious, colorful monkey head that has recently appeared on the Third Street bridge over I-70.  It looks to be made of carefully painted clay, and it is affixed directly to the concrete on walkway side of the bridge overpass.

What’s the significance of the purple monkey head?  I freely admit that I gave that issue some thought as I walked by, but my analysis hasn’t gotten very far.  The head has the telltale xs on its eyes that have long been a cartoon artists’ way of indicating death, drunkenness, or unconsciousness, but other than that, I found nothing to tell me the backstory of the monkey head, or why it was placed on the bridge.  Google searches for drunken monkey, dead monkey, and unconscious monkey didn’t turn up anything particularly helpful, either — although the searches did cause me to become aware of the scientific theory that the human taste for alcohol has deep evolutionary roots that go all the way back to our primate ancestors consuming overripe, fermented fruit as a primary food source and the fact that the Caribbean island of St. Kitts is also known as the Island of Drunk Monkeys because of the alcoholic likings of the green vervets that were brought to the island in the 1700s.  Alas, there doesn’t seem to be any connection between these stories and the purple monkey head on Columbus’ Third Street bridge.

Perhaps the monkey head is the start of some artist’s project, a la Christo, or some clever marketing campaign, where similar heads have been positioned in other parts of town and, after some kind of buzz is generated by curious people like me, we’ll learn that the monkey heads are advertising the introduction of some new restaurant or bar or rock band in the Columbus area?  Or maybe the monkey head is a tribute to someone who met his maker on the bridge.

Whatever the backstory is, I’m intrigued by the monkey head on the Third Street bridge.  I’d be interested in any theories about what the monkey head means, and why it is there.

Every morning on my way to work I cross over the combined roar of the I-70/I-71 traffic on the Third Street bridge.  I use the same bridge to get home at night.  The bridge is a key part of my commute because it is one of the few avenues for pedestrian traffic from German Village and the south side into downtown Columbus. 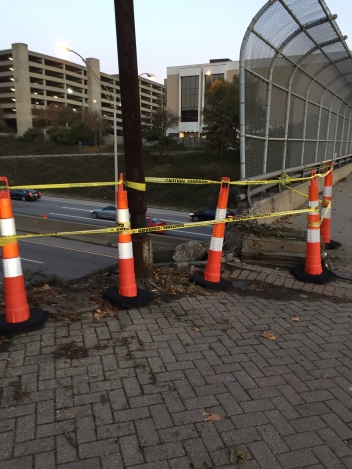 On Monday, I noticed that part of the bridge was blocked off by yellow construction tape and some skinny orange cones.  When I went over to investigate this development, I saw that chunks of the bridge appeared to have fallen off.  A glance suggested that, with one ill-timed stumble, a luckless walker could go pitching through the gap and tumbling down the hillside to the traffic stream below.

Since that close examination, I’ve given the orange cone area the widest berth the sidewalk will allow.  And, because you can’t help but think on a walk, I find myself wondering about what the problem with one part of the bridge means for the structural integrity of the bridge as a whole.  What if the bridge started to crumble just as I am walking across?

That thought has helped me to pick up the pace on my morning walks.  But I’ll be very relieved when this personal, visible, and unsettling reminder of our national infrastructure problem gets fixed.