Here’s another example of the miracles of modern medicine:  scientists have discovered a drug that appears to encourage damaged teeth to regenerate — a development that could bring an end to the practice of drilling out cavities and filling them. 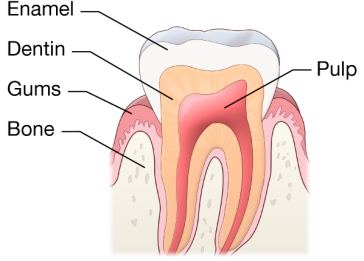 The drug is called Tideglusib.  It not only is self-evidently unpronounceable, it also has the effect of stimulating and activating stem cells within the pulpy center of teeth, promoting the generation of the hard material that makes up most of our teeth, called the dentin — as anyone who has carefully read the tooth diagrams and tooth charts at the dentist’s office will recall.  Scientists tested the drug on mice, and found that applying the drug to cavities in the teeth of mice, using a biodegradable sponge, caused the tooth being treated to regenerate enough dentin to close the cavity.  (Wait a second:  mice get cavities, too?  They must not be very attentive to brushing and flossing.)

The next step will be to test the drug on humans, but the signs are encouraging that we may be on the verge of a new approach to dentistry.  Speaking as someone who practiced terrible dental hygiene as a callow youth and often found myself sitting in the dentist’s chair, mouth agape, listening to the whine of the drill and hoping it didn’t strike a nerve, I think an approach that lets teeth regenerate naturally would be terrific.  And, for those of us who have dental fillings that date back to the days of Beatlemania, the regeneration of natural teeth would have the advantage of avoiding visits to the dentist because old fillings are finally cracking or breaking and need to be replaced, too.