To get down to the San Antonio River Walk, you take stairways and ramps from bridges and overpasses.  Many of the stairways and ramps are of the bland, concrete variety, but some are special — gracefully curved, with wide steps and overhead greenery and delicate tiled facings that reflect a southwestern flair.

It’s amazing how a few colorful squares of tile can turn a generic stairway into an eye-catching addition to an already festive area.  If I had my say, every concrete municipal staircase would have bright tile facings with bold colors and geometric designs.  It’s a way to inject some much-needed art into our everyday surroundings.

We’re strongly considering undertaking some remodeling of our upstairs bathroom.  It’s a perfectly serviceable bathroom, but it’s clearly aging — and, it’s embarrassing to admit it, but we all know that aging often is associated with tile dysfunction. 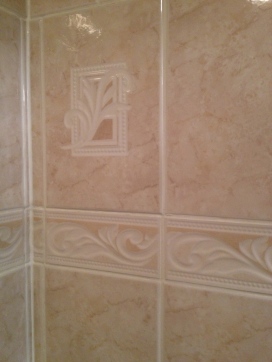 In this case, the regrettable case of tile dysfunction stems in part from the choice of tile made by a previous owner.  They are large tiles, beige-colored, with some ambiguous designs etched onto them.  They look vaguely like the kind of tile you’d see in a Roman bath scene in Ben Hur.  You half expect to find toga-clad Senators in there, arguing vigorously about Cicero’s most recent speech at the Forum.

In short, the tile selection might work just fine in a steam room in pre-eruption Pompeii, but it looks curiously out of place in a bathroom in a 100-year-old brick structure in German Village in Columbus, Ohio.

And then there’s the installation of the tile, which we suspect was a do-it-yourself job.  There’s nothing wrong with do-it-yourself work — hey, we’ve all seen the Lowe’s commercials featuring husband-and-wife teams happily discovering the rich rewards of putting in a beautiful new kitchen floor themselves — but sometimes DIYers cut corners in ways that professionals wouldn’t.  If you’re the proud homeowner who surveys the fruits of your labors and feels flush with the sense of accomplishment from retiling your bathroom yourself, you might overlook the signs that your work was an amateur effort.  If you’re a later owner unfettered by personal pride in the job, however, you see those little signs.

So now we’re into the bathroom remodeling zone — and if we’re going to treat that unfortunate case of tile dysfunction, shouldn’t we also do something with that vanity, and the bulky medicine cabinet with the annoying mirrored sections that you have to press in to open?  And who’d have thought there were so many different kinds of non-Roman tile to consider?

If I find myself talking about grouting for more than four hours, I’ll be sure to call my doctor.