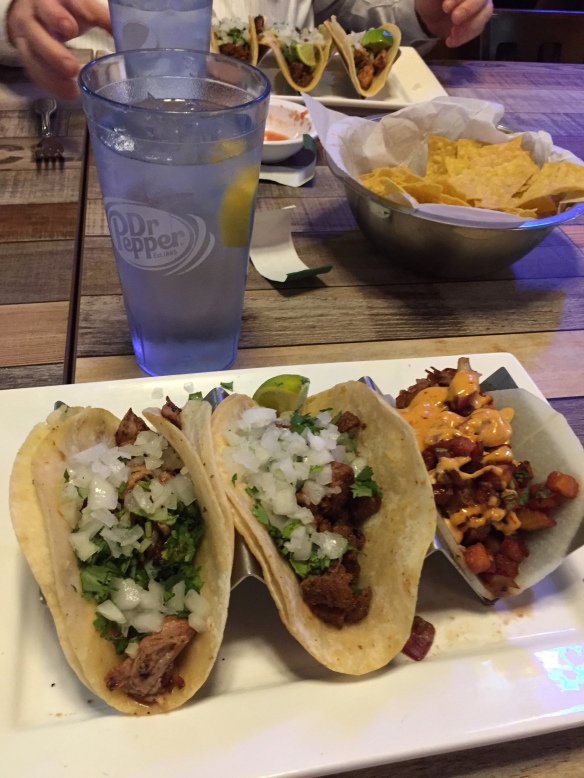 Last week the lunch bunch paid our first visit to Tio’s and came away favorably impressed. Tio has a totally different vibe than Condado.  For one thing, it’s much quieter.  Condado goes for more of a bustling street taco approach; Tio opts for more of a traditional restaurant feel.  Consistent with that, there’s an actual menu of taco options, rather than the Condado build-your-own taco checklist.  That’s not to say one approach is better than another — they’re just different.

As for the tacos?  They’re very good.  So good, in fact, that JV and the Bus-Riding Conservative staked out the aggressive position that Tio’s tacos are better than Condado’s.  The Unkempt Guy and I, being less impulsive and more thoughtful by nature, weren’t quite willing to go so far after only one visit, but we admitted the tacos were excellent.  At the recommendation of our server we all got a spread of three, which turned out to be just right for a moderate lunch.  My favorite was the taco on the right, above, which substituted a folded slice of jicama for the taco and was filled with crunchy shrimp and covered with chipotle sauce.

Who will win the downtown Columbus taco wars?  I think the real winner will be the downtown lunch crowd, which now has a choice when they feel the call of the taco.