Urban Columbus has taken to rent-a-scooters like a duck takes to water. Every day you see dozens of people zipping down streets, in bikes lanes or on sidewalks, looking super cool because that’s how people on scooters inevitably look.

There’s just one problem: pedestrians. We poor downtown walkers have been reduced to the status of scooter dodgers, having to pick our way around scooters left willy-nilly on sidewalks, in front of business doorways, or wherever those ultra-cool scooters rider choose to abandon them. And because those sophisticated scooterites apparently can ride the scooters wherever they want, including sidewalks, we walkers have to be especially vigilant — because the scooter users are too busy being cool to pay much attention. Already I’ve had two close calls — one when a scooter rider zipped past at about 10 mph just as I was coming to a corner and we luckily missed a collision by inches, and the other when the rider turned a corner and I was able to dodge without a second to spare. In each case I got a breezy “sorry!” as the rider rocketed on his merry way.

I’m all for downtown Columbusites getting their coolness quotient up to the maximum level, and I do think scooters fill an urban transportation niche — which is why they’ve instantly become popular. But can the cool contingent at least take care in operating the scooters, and show some consideration for the rest of us in where they leave them?

The futurists among us got a charge yesterday when the first test of the hyperloop transportation system occurred in the desert north of Las Vegas, Nevada. 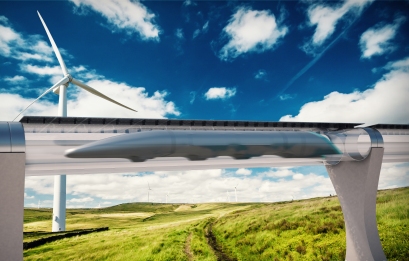 The hyperloop system sounds like something from The Jetsons or a science fiction story.  Using magnetic levitation technology and special propulsion units, the hyperloop would send sleds of people and cargo rocketing through above-ground tubes at speeds of hundreds of miles per hour.  Proponents say the finished product would allow people to get from San Francisco to LA, or from Washington, D.C. to Manhattan, in just 30 minutes.  Hyperloop buffs also argue that the system would have lower energy costs and would create no carbon emissions.

The test yesterday wasn’t much — it lasted two seconds, and saw the propulsion unit push a ten-foot sled to speeds of more than 100 miles an hour before hitting a sand bank — but the founders of the start-up company Hyperloop One viewed it as their “Kitty Hawk” moment, when the concept of a new form of transportation get its first practical test, just as the Wright brothers’ plane did.  And the promise of the technology is sufficiently attractive that other companies are pursuing the hyperloop concept, too.

Hyperloop has a long way to go, and there will be huge issues involved in developing the technology, getting the land rights and funds to build the sleds and elevated tubes and, eventually, convincing people to use a system that would put people in the position of the bullet in a gun.  Still, we should all welcome the pioneers who try to develop new transportation approaches.  Sometimes they work, sometimes they don’t, and sometimes they prove uneconomical — anybody remember the SST? — but they always push the technology forward.

A fair question, though, is whether a sufficient number of people will be willing to sit in a tube and be propelled forward at hundreds of miles an hour.  Why not?  When you think about it, that’s basically what happens when you board an airplane.