I’ve been thinking about the journalism world since writing my earlier piece on what the move away from “objectivity” means for the world of the newsroom.  I think there are some other forces at play that are making the world of daily newspapers very difficult right now — some unavoidable, some self-inflicted. 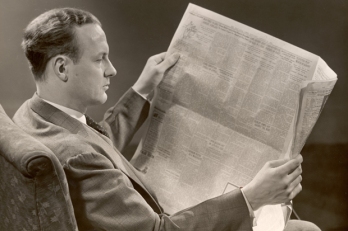 Obviously, the main unavoidable problem is . . . speed.  People expect to get things faster and faster, and we’ve gotten so spoiled by instantaneous speed that we now groan at even a few seconds’ delay as our browser calls up a website.  The daily newspaper simply can’t compete with that — there are too many steps in the process.  By the time the newspaper lands on your doorstep, it will therefore likely be viewed as “old news” already.  It’s been all over the internet for hours — so who wants to sit down and read it again?  And how many people want to sit down and actually read something, as opposed to flipping through content on their cell phones as they head out for a jog or wait for an elevator?

Another unavoidable problem is cost. Newspapers of the past had large payrolls — from the reporters and columnists to the editors to the photographers to ad salesmen to the people who laid out the pages and the guys in the print shop running the presses.  How many labor-centric businesses are thriving these days?  And, as cost-cutting has occurred, newspapers cut into the muscle of daily journalism — the people who made newspapers different from and more reliable than bloggers, like experienced editors who would send stories back for additional fact-checking, or investigative reporters who might take weeks to produce a big, carefully constructed and rigorously tied down story.

But there are self-inflicted errors, too.  I think many newspapers have botched the inevitable move to digital delivery.  If you look at many news websites, they are a riotous mess from a presentation standpoint.  There’s no front page or above-the-fold organization that tells you what the lead story is.  Print newspapers may be old-fashioned, but there was a clear organization at work that was comforting, dependable, and helpful.  If you wanted to feel reasonably informed about what was going on in the world and your town, you read through the front page and the national, state, and local news sections, and then you could turn to the business section, or sports.  You knew that some intelligent person had made some thoughtful decisions about the relative importance of the stories.  Does anyone feel that way about most news websites on-line?  Hard news is mixed up with celebrity news and “sponsored content” that doesn’t look materially different from the “news.”  What do you need to read to truly feel informed?

And that brings me to a final point:  the trivialization of what is supposed to be news.  How many of the stories on a basic news website — say, msn.com — are what we think of as actual news reporting, and how much of what we see featured is content about celebrities being out with their boyfriends or clickbait articles about why a particular sports figure should be seen as a bad guy?  We’ve reached the point where somebody’s context-free cell phone video of a delivery driver who didn’t help an old guy who fell to the ground is featured as prominently — and perhaps more prominently — than an article about a foreign conflict.  And there are opinions, on stories large and small, everywhere you look.

In their quest to keep up with the times and be hip and edgy, newspapers have lost the sober, thoughtful perspective and reputation they once had, and have elevated the inconsequential.  It may appeal to some people, but it doesn’t appeal to people who remember newspapers as they once were.