I’m in Washington, D.C. for meetings, staying in the old part of town between the Capitol and the White House.  Last night I had dinner with a colleague. 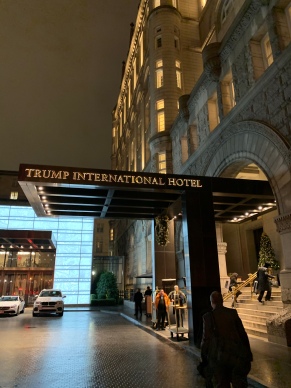 When my friend reached out to me last week to make arrangements for meeting for dinner, he carefully raised two issues:  first, did I like steak, and second, if I did like steak, would I mind going to the steakhouse in the Trump International Hotel, which is located in the Old Post Office building that is very close to my hotel?

I chuckled a bit at the cautious way in which my colleague approached even the  possibility of eating dinner at a restaurant in a Trump property.  Clearly, he was wary that even though the venue was very convenient and the restaurant had a good reputation, just making such a suggestion might bring an explosion and denunciation in response to the very thought of passing under the Trump name.  And his careful approach was entirely justified, because there is no doubt that a significant segment of the American population has sworn off ever doing anything that involves setting foot on the premises of a Trump property or that might be viewed as acceptance or support of the Trump brand.  Me?  I like steak and especially like being able to walk to a convenient dining venue, so I agreed to have dinner at the Trump International steakhouse — which was very good, by the way.

Still, I found the incident pretty remarkable.  I’m not familiar with the value of the Trump brand prior to his run for the presidency, but it seems pretty clear that it has been affected, and not in a good way, by Trump’s behavior on the campaign trail and as President — to the point where even mentioning the possibility of visiting a Trump property for dinner is a subject to be approached with delicacy and trepidation lest sensibilities be bruised and personal relationships be shattered.

That’s not exactly a good attribute for a brand. 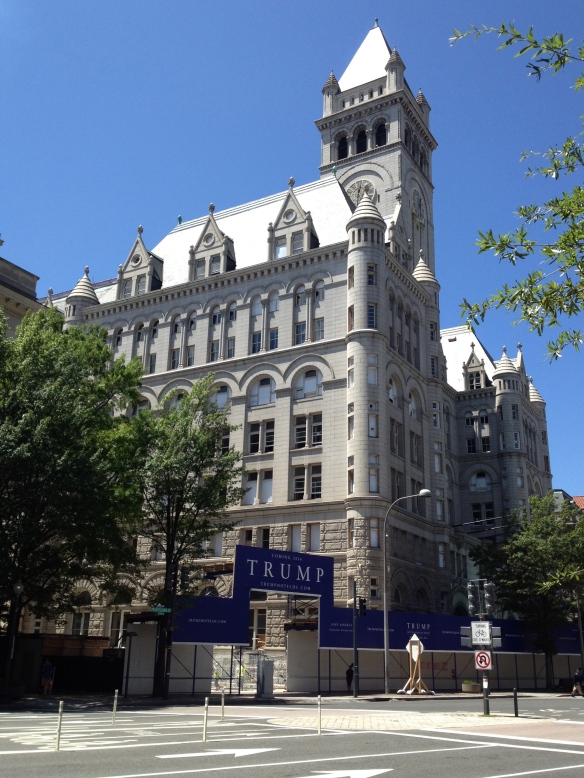 I was in Washington, D.C. recently and saw this sign in front of the Old Post Office, advertising it as a new “TRUMP” property — in this case, the Trump International Hotel.

The Old Post Office is a beautiful building, and I have no doubt that it will make a magnificent hotel, but . . . the Trump International Hotel?  Doesn’t that seem just a tad inconsistent with The Donald’s recent political speechifying?

How many international visitors are really going to feel welcome at a Trump hotel and are going to be eager to stay there?