A few days ago the annotated version of George Washington’s copy of the Constitution sole for nearly $10 million — $9,826,000, to be precise.  That price was paid by the very genteel sounding Mt. Vernon Ladies’ Association.

That seems like a lot of money, until you start to think about it.  This particular volume was published in 1789, and was prepared specifically for George Washington.  George Washington! It’s nice to know that, not only did we once have leaders like George Washington, but they also read and carefully annotated their personal copies of the Constitution.  (Of course, the linked article describes the book as being in almost pristine condition, which might mean that George Washington didn’t crack it for leisure reading all that often.)

A recent study reported that fewer nations are modeling their constitutions on the U.S. Constitution.  In the ’60s and ’70s, new constitutions were patterned on the American version, but that apparently is no longer the case.

The implication of the study is that our Constitution is somehow passe.  In the “rights race,” we’re falling behind!  We’re not keeping up with modern trends followed by enlightened nations everywhere!

Is anyone really troubled by this?  Ours was the first true written constitution, and it has served us well.  Other nations have them because our form of government has served as a model.  But there is a big difference between writing words on paper and actually living up to the concepts they express.  History shows that lofty ideals often are written in the otherwise ignored “constitutions” of repressive regimes.

Let’s not forget, either, that our Constitution was designed to sketch our government, its officers, and its functioning in broad strokes, allowing for flexibility and development over time.  In contrast, the “constitutions” described in the study sound more like statute books that leave little room for creativity and the need to respond to unexpected circumstances — like a crappy economy that interferes with the “right to work.”  The Greek Constitution, for example, includes “right to work” provisions.  How’s that working out for Greeks these days?

So, I don’t care if our Constitution has fallen out of favor with the camp followers who are drafting constitutions these days.  I’ll listen when their so-called “constitutions” have endured for 225 years, survived a civil war, and allowed their countries to become the most prosperous, democratic countries on Earth.

Today a federal district court judge in Virginia ruled that the “individual mandate” provision of the “health care reform” legislation — that is, that portion of the statute that would require people to purchase health insurance or pay a penalty — is unconstitutional.

Judge Henry Hudson concluded that the individual mandate “exceeds the constitutional boundaries of congressional power.”  He found that the commerce clause, which gives Congress the authority to regulate interstate commerce, does not permit Congress to regulate a person’s decision not to purchase a product.  Although there are other court rulings that have upheld the “health care reform” legislation, Judge Hudson’s decision is significant because it reflects an interesting approach to skirting the broad powers afforded Congress through the commerce clause.  In effect, Judge Hudson is saying that if individuals choose not to purchase a good or service they are not engaged in commerce, and therefore they necessarily are beyond Congress’ regulatory power under the commerce clause.

Of course, this issue will be addressed by federal appellate courts and, ultimately, will be decided the Supreme Court.  Until then, it is an issue that Americans of all political stripes may well want to consider.  Supporters of the “health care reform” legislation want that law to be upheld — but do they really want a court ruling that says that Congress can force Americans to buy products or take other actions in furtherance of commerce?  In other instances, federal law requirements are simply attached to a decision and therefore become part of the individual decision-making process.  If I want to work, for example, I have to pay Social Security and have income tax withheld from my wages.  If I don’t want to pay Social Security, I can choose not to work.  With the “individual mandate,” however, there is no choice.  Simply by virtue of being an American, you become obligated to buy health insurance.

When we speak of constitutional doctrine, we have to take the long term view and look past the relative merits of the statute at issue.  If the Supreme Court rules that Congress has the constitutional power to force us to buy health insurance, what’s next?  Smoke alarms?  Government bonds?  Subscriptions to the Congressional Record?  And if we think the corruption and influence of lobbyists is out of control now, what will it be like if corporations and interest groups learn that, through some deft lobbying work, they can achieve passage of legislation that will require us to spend our money for their goods and services?

The networks are saying that the U.S. House of Representatives will flip to the Republicans, but the Senate, in all likelihood, will stay with a Democratic majority.

If I recall my high school Civics class correctly, the House was supposed to reflect the passions of the American people, but the Senate was supposed to be largely immune from those passions.  In this election, it looks like the House results are reflecting the passions, as the Framers intended.  In many states, the House Democrats who voted in favor of broad expansions of federal governmental power and significant deficit spending are being wiped out.  The message in favor of a smaller, less intrusive, less costly federal government seems clear.

In the Senate, the World’s Greatest Deliberative Body has not been quite as driven by those voter passions.  New, conservative candidates like Rand Paul and Marco Rubio have won in some races, but in other states the voters have rejected some of the more fringe-oriented candidates — like Christine O’Donnell in Delaware.  Of course, the design of the Constitution means that more than 60 of the Senate did not stand for election in this cycle.  These current Senators will deal with the new members of the Senate but also will be thinking, hard, about what the political climate will be when they stand for reelection in two years, or four years.

The Constitution was carefully designed to have a bicameral legislature with houses with different interests and different perspectives.  In this election, that careful design seems to have worked as intended.

Supreme Court Chief Justice John Roberts has weighed in on President Obama’s State of the Union speech and, specifically, the President’s decision to directly criticize the Supreme Court for its recent campaign finance decision.  In response to a question from a University of Alabama law student, the Chief described the scene as “very troubling.” He noted, correctly, that the President has every right to disagree with and criticize the decisions of a coordinate branch of government, but that President Obama’s remarks ran afoul of considerations of decorum and propriety.  As I’ve posted before, I think the Chief Justice is right on that point.  In effect, President Obama used the Justices, who can only sit and listen, as a prop to score a few political points with his supporters, without showing proper respect for the Court or its role in attending the State of the Union address.  I predict that we’ve seen the last of Chief Justice Roberts — and perhaps any Supreme Court Justice — at a State of the Union speech.

When White House Press Secretary Robert Gibbs was asked about Roberts’ comments, Gibbs’ response was wholly political — and therefore basically confirmed that President Obama’s motivation for making his comments in the first place were political as well.  Gibbs said:  “What is troubling is that this decision opened the floodgates for corporations and special interests to pour money into elections – drowning out the voices of average Americans.”  He added that “the President has long been committed to reducing the undue influence of special interests and their lobbyists over government. That is why he spoke out to condemn the decision and is working with Congress on a legislative response.”  What purpose is served by such comments except to try to advance a political agenda at the expense of the respect accorded to the judicial branch of our government as a neutral arbiter of constitutional disputes?

I must candidly admit that I fell asleep during President Obama’s SOTU speech last night, so I didn’t witness, in real time, the President calling out the Supreme Court on its recent campaign finance ruling.  However, I’ve seen tapes of the President’s remarks (and Justice Alito’s reaction ) and I think the President acted improperly. 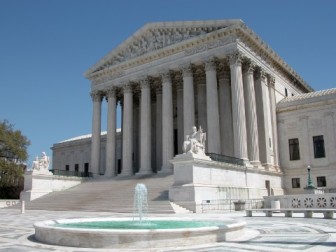 Perhaps the Supreme Court shouldn’t even attend the SOTU speech.  The Court is a non-political entity; when the Justices attend they sit there in their robes, listening respectfully but not applauding, a kind of living and stolid embodiment of the third branch of government.  I can’t remember a State of the Union speech where the President has ever directly challenged a Supreme Court decision.  Calling out the Court as the President did — knowing that the Court will make no response — is like a bully tormenting a kid in a wheelchair.  It is not particularly brave to taunt someone who can’t possibly respond.  For that reason, the President’s comments in that regard seemed like cheap political theatrics, and a bit presumptuous.

The Supreme Court is a limited, careful institution.  It decides actual controversies and often elects not to accept cases that have overt political elements.  The Court would never presume to reach out and issue an advisory opinion about, say, whether a statute that exempted Nebraska from ever paying for increased in Medicaid costs passes constitutional muster.  The Supreme Court has tried, and for the most part succeeded, in staying within its constitutional role.  The President should respect that role.  Last night, President Obama unfortunately failed to do so.  I wouldn’t blame our Supreme Court Justices if they skipped the SOTU from now on.