That means it’s not unusual for me to be walking one way or the other with a closed-up and snapped shut umbrella that isn’t being used to shield me from the rain.  And that means that, on those brief journeys, I get to enjoy some “hook time,” where I can use the umbrella’s hooked handle to twirl the umbrella windmill style, trying to do so a la Gene Kelly in Singin’ In The Rain, or carry it on my forearm, like a proper British gentleman, or use it as a cane and tap the sidewalk as I go along.  The hook is crucial to such maneuvers and my innocent fun, and I got to wondering:  when and why did umbrellas start to be manufactured with hooked handles?

According to The Gentleman’s Gazette, the hooked handle was added to the umbrella design in the 17th century.  That website explains:  “The curvature of the handle was intended to allow a servant to easily hold the umbrella at an angle to shield their employer. Although we primarily use this handle today as a method of hanging the umbrella from the arm, it still maintains its original practicality for doormen style umbrellas used by valets and doormen throughout much of the world. In fact, even in American cities like New York, it’s widely considered inappropriate for a doorman not to be prepared with a large canopy for those entering or exiting the premises.”

I’m not sure whether the servant explanation is historically accurate, but it’s certainly plausible, as anybody who has had to position their umbrella at an angle to brace it against the wind on a gusty day can attest.  It’s a lot more comfortable to do so with a hooked handle than a straight handle, because the hooked handle really allows you to get a firm grip.  But if the hooked handle was invented for that utilitarian purpose, it’s certainly provided other important benefits that perhaps weren’t fully appreciated in those pre-Singin’ In The Rain days.

Beggars can’t be choosers, and if I’m caught somewhere during an unexpected rainstorm I’ll use any umbrella to keep the rain off.  But if I’ve got a choice, give me an umbrella with a hook.

We’ve had rainy, blustery weather in the Columbus the past few days.  It’s been unpleasant, but it gives all of us Midwestern walkers a chance to demonstrate a little appreciated, but essential, life skill:  umbrella jousting.

At least, that’s what I call it.  It comes into play on rainy, windy days when you’re trying to use an umbrella.  Unless you position your umbrella very carefully, an unexpected blast of wind will turn your umbrella inside out and pull the canopy off the umbrella ribs, leaving the fabric flapping in the wind, the ribs exposed in unseemly fashion, and the walker completely unprotected from the elements.  It’s not an easy thing to master, and it takes some practice.  That’s why it’s not uncommon to see umbrellas ruined by Mother Nature sticking forlornly out of trash cans on downtown streets.  Until you acquire the knack of umbrella jousting, you’re likely to lose a few Totes.

The only way to prevent unwanted umbrella shredding is to position the umbrella precisely against the maximum amount of wind pressure, brace yourself, and lean into the point of the wind as you walk forward.  You’re like a knight using his lance in a medieval joust, or a fencer using his foil.  Either way, it’s you against the wind.  And it’s not just a matter of brute force, either.  Because the wind is an unpredictable, devilish adversary, you have to be able to sense the shifts in the wind direction and promptly reposition your umbrella at the first movement, or risk disaster.

Veteran Midwesterners become remarkably adept at umbrella jousting.  It’s one of the skills that distinguish us from the desert dwellers.  I’m proud to say that I’ve had some umbrellas that I’ve navigated through the wind currents for more than 20 years.

The constant rains and blustery, weirdly unseasonable weather have wreaked havoc on our umbrella collection.  The little pop-up umbrellas, in particular, have taken a beating — which is why you see lots of soggy, downcast Columbusites trudging around carrying massive, ultra-sturdy golf umbrellas.

Today as I walked to work it started misting.  After feeling proud that I had remembered an umbrella, I discovered that the canopy on this one had become unmoored from two of its ribs, leaving the cover flapping in the breeze.  Embarrassing, to be sure — but half an umbrella is still better than none.  So long as I could position the umbrella to keep the rain and mist off my glasses, I’m OK.

I’m guessing that Columbus-area stores have never sold as many umbrellas as they have this year. 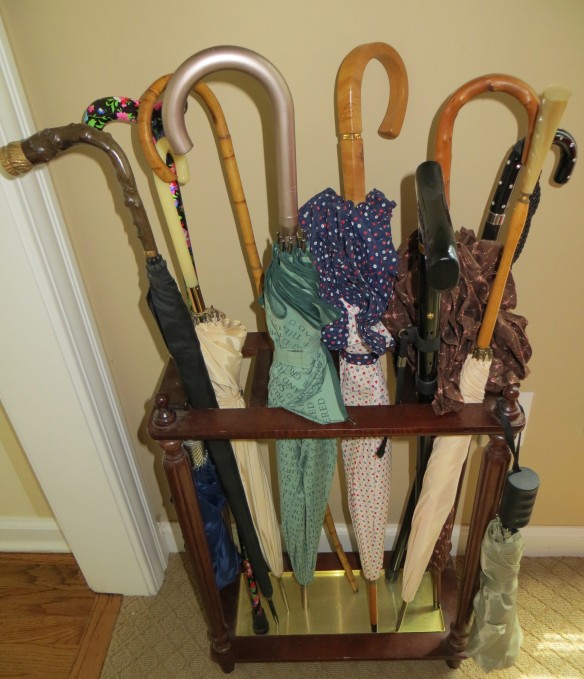 We recently inherited an umbrella stand, and an eclectic collection of umbrellas and canes, from Kish’s Mom.  We have frilly, polka-dotted umbrellas and sober black umbrellas, umbrellas with bone handles and umbrellas that could easily be hurled, javelin-like, at an approaching foe.  We have rattan canes, and riotously colored canes, and canes with sturdy black handles that are all business.

Whenever I look at this umbrella stand and its contents, I inevitably think about England’s most famous nanny and Princeton-Plainsboro’s irascible diagnostic genius —  two very mismatched fictional characters whose signature accoutrements nevertheless fit quite comfortably together.