It turns out that the Utica Shale natural gas play isn’t the only boom that’s occurring in Ohio.  The Ohio alcohol industry also is growing like crazy. 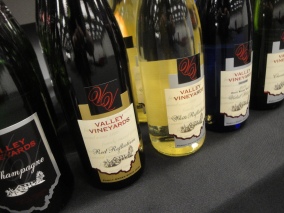 During the first six months of 2011, Ohio handed out more permits for breweries, wineries, and distilleries than ever before.  There are now 164 wineries, 70 breweries, and 14 producers of spirits in the Buckeye State.  These businesses employ thousands of workers.  Some have been started by families and home brewers who’ve decided to take their hobbies to the next level; others are well-funded operations that seek to capitalize on the growing interest in locally produced food and drink items.

Kish and I seem to run across Buckeye booze everywhere we go.  At the Black Creek Bistro, which prides itself on its local sourcing, the bar serves Ohio-produced liquors.  At Ohioana events, we’ve sampled wines offered by Valley Vineyards, from Morrow, Ohio.    There’s even an “Ohio River Valley Wine Trail,” complete with promotional brochure, that allows the wine connoisseur to visit 10 wineries in the southwestern part of the state.

The local sourcing movement is great for the producer and for the consumer, too.  The locally crafted hooch is of good quality and is non-generic.  You get options that you wouldn’t get from a large, distant commercial manufacturer — and you’re helping your neighbors, besides.