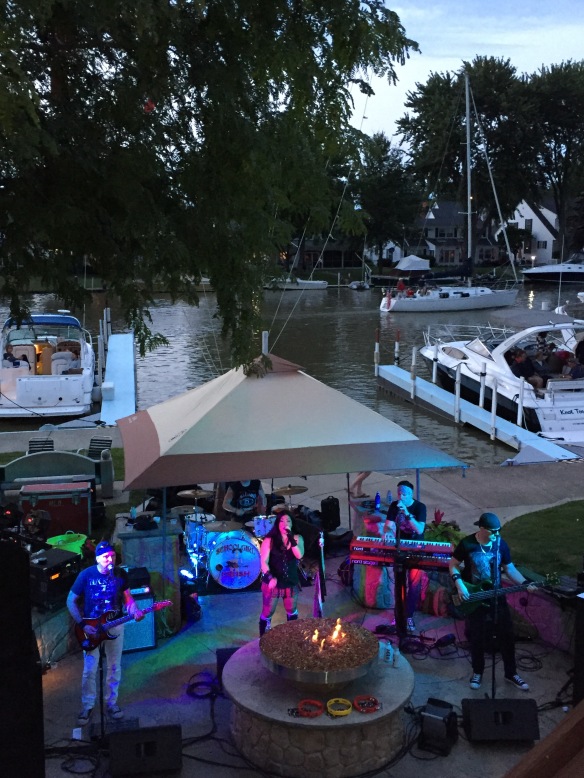 Last night we attended Kish’s 42nd high school reunion.  That’s the one where everybody sheepishly owns up to having turned 60 but likes to think that their inner age, and ability to have some fun,  is a lot closer to what it was in their senior year.

The evening started at the Vermilion Boat Club, which featured a pretty good band called School Girl Crush that delivered credible covers of AC/DC and Kansas songs as boats sailed past behind them.  The festivities then progressed to the local VFW and American Legion halls.  Along the way there were lots of squeals and hugs, women introducing themselves by their maiden names, oft-told stories about class tragedies and scandals, dancing, Fireball shots, and a conga line that wended its way past the bemused vets at the VFW.

In the VHS Sailors Class of ’75, the class spirit lives on, long and strong.

I’ve read that our brains have a natural tendency to interpret shapes as human faces.  This speedboat docked at the Vermilion Boat Club yesterday looked like a human face sporting an evil grin.   I imagine it enjoys roaring past other boats and and leaving a taunting rooster tail in Lake Erie’s waters.

We were in Vermilion today and had lunch at the Vermilion Boat Club.  It was a perfect, cloudless spring day, and the boaters were out enjoying the weather and water.  This photo was taken from the VBC docks looking northwest at the lagoon that leads out to Lake Erie.