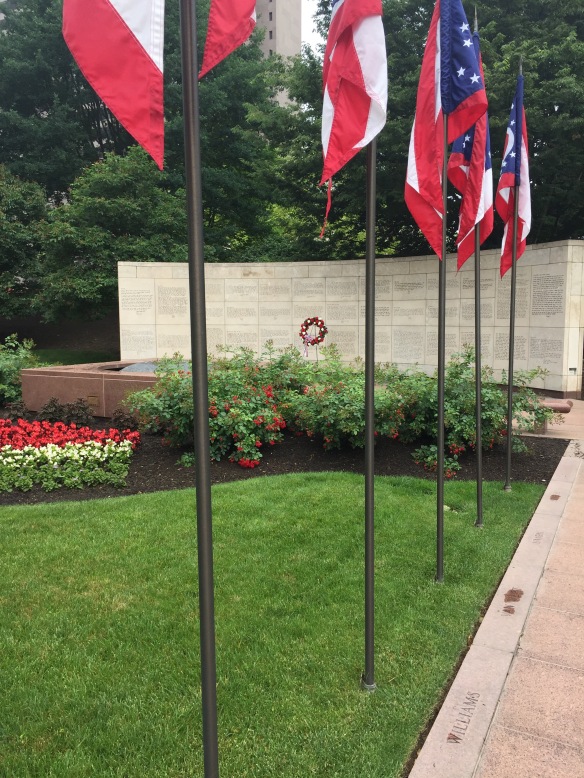 The east side of the Ohio Statehouse features the Ohio veterans plaza.  It consists of two curved stone walls that face each other from opposite ends of the plaza, two fountains, and two grassy rectangles with room for flowers and plenty of Ohio flags that can be put in place for a holiday weekend.

The stone walls are adorned with snippets from letters written by Ohioans who were serving in the different wars in which America has fought.  It’s a simple yet elegant reminder of one unifying reality for all of the soldiers and sailors, regardless of when or where they fought:  they left home in service of their country, and as they put themselves in harm’s way they wanted to let the family back home that they were okay, that they accepted the cost of their service, and that they hoped to make it back home when their service was done.

This weekend they’ve also put up a simple wreath at the northern end of the plaza.  It’s a good place to reflect on the sacrifices of those who have served and to inwardly express our appreciation to them for making our current lives possible.

Profound thanks to all of our veterans, and happy Memorial Day to everyone!

Memorial Day seems like a good day to check in on the Veterans Administration.  How is the federal agency charged with helping out veterans, and showing them that we truly appreciate their service on our behalf, doing?

Here’s an indication:  last week, the Secretary of the Veterans Administration got withering criticism from people at all points on the political spectrum when he compared the inexcusably long wait times at VA facilities to vacationers waiting in line at Disney theme parks.  At a breakfast with reporters in Washington, D.C., VA Secretary Robert McDonald said:  “When you go to Disney, do they measure the number of hours you wait in line? Or what’s important? What’s important is, what’s your satisfaction with the experience?”  Sure . . . let’s compare veterans waiting forever for medical care for life-threatening ailments and conditions to the winding lines at the Magic Kingdom.  Makes you wonder if Robert McDonald shouldn’t change his first name to Ronald.

It’s hard to believe somebody so tone deaf could become the Secretary of an important federal agency, but let’s face it — we don’t exactly have the best and brightest staffing up our public service jobs these days.  At least McDonald had the good sense to apologize for an incredibly stupid comparison.

I don’t think we should overreact to one dim-witted comment by some functionary, of course, but I do think McDonald’s statement illustrates a core issue with the VA:  unfortunately, it’s just not that high a priority.  It doesn’t attract the most talented and dedicated people, people who understand that we have an obligation to our veterans and just aren’t living up to our end of the bargain.  So we end up with administrators who, over the years, have let VA health care facilities deteriorate and veteran wait times grow.  We’ve got issues with the VA’s approach to prescribing drugs for veterans suffering from post-traumatic stress disorder.  And now we’ve got a guy who makes ignorant comparisons of veterans needing medical care to families waiting in line for the Pirates of the Caribbean ride.

Two years after the most recent major VA scandal, has any progress really been made?  In the midst of a presidential campaign, we’ll get the speeches about needing to do a better job for our veterans, and taking care of our veterans, but we’ve been getting those speeches for years, without any noticeable success or progress.

Sometimes I think the Department of Veterans Affairs should be renamed the Department of Lip Service, because that seems to be our focus.  When will we stop talking about honoring our commitment to our veterans, and actually do right by them?

Happy Memorial Day!  And as we enjoy the holiday, let’s remember, thank, and honor the veterans whose service and sacrifice have helped to keep our country safe and free.

We were in a small neighborhood bar in San Antonio on a Saturday afternoon in November, sipping beers and getting ready for the kickoff of the Ohio State-Michigan game.  There were only the three of us in the place with the bartender.  The door to the bar opened and a guy in his 20s walked in.

He looked at us and began talking . . . and talking, and talking.  Was that our car right outside the door?  Where were we from?  Columbus?  Hey, he was from Whitehall!  Watching the Buckeyes?  Well, he was a Buckeye fan, too.  What did we think of Jim Tressel?  Who did we think was the best Ohio State quarterback during the last ten years?  What did we do for a living?  Where did Russell go to school?  How did Russell like being an artist?  Kish left to do some shopping, and still the questions and running commentary kept coming.  What were we going to do while we were in San Antonio?  Did we know that we were there during the San Antonio bad weather period?

For brief instants the guy would watch the game and root for the Buckeyes, but for the most part he was a chatterbox who simply would not stop talking or let us just watch the game in peace.  We answered his direct questions politely because that’s what people are supposed to do, but also because I didn’t want to do anything to provoke him.  My guard was up, because people don’t normally walk into a bar and begin a rapid-fire conversation with complete strangers.  Was the guy on drugs?  Was he getting ready to ask us for money?   What was his angle, really?

Halftime came, and the guy got a call on his cell phone.  When he took the call he walked around, seemingly agitated, and talked loudly to the person at the other end of the conversation.  A minute or two later he ended the call and announced he was leaving, and after we said goodbye he vanished into the rainy San Antonio afternoon without incident.  I admit that I breathed a sigh of relief.

We looked over at the bartender, and I asked if he knew the guy.  He said no, he’d never seen him before.  Then he shook his head sadly and said, “PTSD.”  The bartender explained that the San Antonio area is home to a lot of different military bases, and therefore to a lot of returning veterans who were dealing with post-traumatic stress disorder.  In fact, there was a Veterans Administration facility across the street, and he suspected the guy had come from there.

The bartender himself was a veteran, he said, and he’d seen the guy’s kind of behavior before.  He said that when he returned from overseas, struggling with what he had seen and done, the VA’s first response was drugs, because “drugs are easy.”  So he took the drugs the doctors gave him, but he later decided that the drugs he was prescribed, and the kinds of mood swings they provoked, were just too much, so he stopped.  The talker’s behavior, the bartender explained, was showing the signs of the drugs he was prescribed for his PTSD.  His behavior wasn’t his fault.

We had no way of knowing for sure, of course, whether the talker in fact had PTSD as a result of his military service, because he hadn’t talked about it — but the bartender’s comments had the obvious ring of truth.  It turns out that the bartender’s view of the VA’s actions isn’t unique; it’s not hard to find news stories that talk about the VA’s approach to prescribing drugs to returning veterans and question its value.

I felt bad for doubting a guy who had served his country, been scarred by the experience, and wasn’t getting the help he really needed to deal with his issues and return to civilian society.  And I wondered just how many returning veterans deal with PTSD and why the government that sent them over to fight hasn’t come up with an effective approach to a common problem.

In furtherance of Veterans’ Day, I share this picture that Kish found of her Dad, Bill Kishman, in his Army uniform during  World War II.  He was one of the finest people I’ve ever met, and he was proud of his service for his country.

. . . and a heartfelt “Thank You!” to all of our veterans and the women and men on active duty for your service on our behalf.

Today was the Columbus Veterans’ Day parade, which means high school bands, flatbed truck floats, and marching veterans.  And, of course a rare tank on the streets of downtown Columbus — which occasioned the bad pun in the headline of this post.

Most sincere thanks to all of our veterans for their service!