For years, Kish has gotten a “word-a-day” calendar as a Christmas stocking stuffer.  The calendar gives you a word, its definition, and its pronunciation, and then uses the word in a sentence, like you’re the contestant in the national spelling bee.  It’s an interesting, relatively painless way to learn new words and build that personal vocabulary to ever more impressive heights, and occasionally — O, happy day! — the word is one you actually knew already. 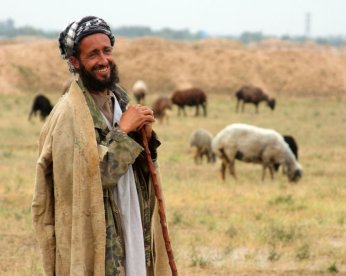 Sometimes, though, the words aren’t exactly easy to fit into everyday conversation.  On Monday, for example, the word was “eclogue.” What’s an eclogue (pronounced ek-log), you ask?  Why, it’s a poem in which shepherds converse, of course.  The sentence the calendar offers to illustrate its meaning is:  “The poet’s new volume offers modern translations of Virgil’s eclogues.”  Even at an erudite workplace like mine, it’s hard to imagine a discussion where you could smoothly use “eclogue.”

Although I can’t see ever using the word in actual conversation, and therefore am likely to promptly forget it, I thought it might be fun to try to write an eclogue, just to give ol’ Virgil a little competition.

Far out yonder, on grassy plain

Where sheep did graze, were shepherds twain

As they silently did walk

One shepherd felt the need to talk.

Said Shepherd One to Shepherd Two:

The sheep all graze o’er by the lake.

Said Shepherd Two to Shepherd One:

“I’m sad to say that I’ve brought none.

I’ve got no food, but none the worse.

Let’s use our break, then, to converse.”

Said Shepherd One to Shepherd Two:

What we’d discuss, or what I’d say.

I’ve been out tending sheep all day.”

Said Shepherd Two to Shepherd One:

“There’s nothing new under the sun.

And what is new I won’t discuss.

And watched as sheep grazed peacefully

It wasn’t much of an eclogue

But ’twas enough to fill this blog.