The Brown Bear, a faithful reader of the Wall Street Journal, alerted some of us to a Journal article that includes Columbus in a list of “6 great small cities for food lovers” and identifies six great food options for the lucky residents of Ohio’s flagship city.  The Journal‘s six Columbus choices are The Refectory, Skillet, Basi Italia, Wolf’s Ridge Brewing, Katalina, and Ajumama. 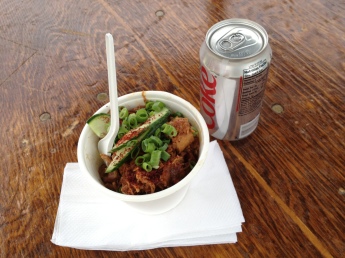 I’ve got no quibble with the restaurants on the list, although I haven’t been to Katalina yet.  In fact, I’ve written about my excellent omelet at Skillet, the delicious toad in the hole at Wolf’s Ridge Brewing, and the mid-boggling amdong chicken at Ajumama, pictured at right.  The Refectory has long been a Columbus gastronomic landmark — its oyster soup may be the best soup this committed soupophile has ever tasted — and Basi Italia is a favorite of our friends the Bahamians where we’ve always had great meals.  I also commend the Journal for including a food truck, Ajumama, among the six choices.  I’m a huge fan of the Columbus food truck culture, whether found at Dinin’ Hall or the annual food truck festival, and I’m glad to see one of their number get a deserving nod in the pantheon of foodie destinations.

No, the problem with the list is who’s not on it.  No G. Michael’s?  No Rigsby’s?  No Indian Oven?  No shiznite from the Green Meanie?  And what about Alana’s, or the Black Creek Bistro?  They’re all deserving choices, too.

A list of six just isn’t enough to do justice to the great foodie options in Columbus.  And one other thing about the Journal article:  it says Columbus isn’t well known for its dining scene — yet.  Says who, WSJ? 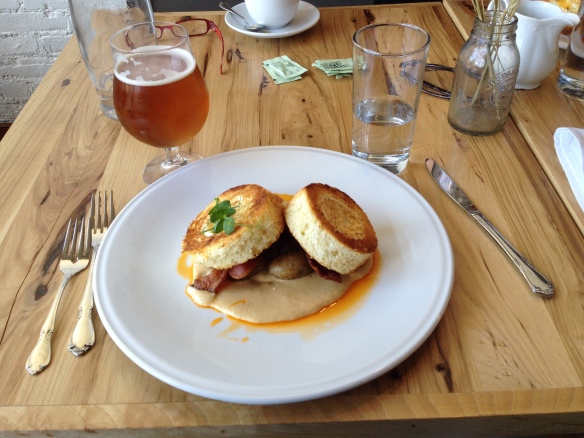 Wolf’s Ridge Brewing is another new destination in the downtown Columbus dining scene.  The Jersey Girl and I went there for lunch and had a fine meal, but when I heard it was open for brunch on Saturday and Sunday I was eager to check it out.  Today, with Richard in town and ready to see what was new in Columbus, was the perfect opportunity.

When I reviewed the brunch menu I knew Wolf’s Ridge was a good choice, because one of the options was Toad In The Hole.  With a pub food name like that, how could you decline to order it?  I certainly couldn’t resist the temptation.

It turns out that Toad In The Hole is round pieces of fresh bread with a hole cut in the middle, like a doughnut.  The hole is then filled with a baked egg, cooked so that the yolk is runny.  The two pieces of bread are served over slices of bacon, fingerling potatoes that look like sausages, and a kind of gravy that was absolutely delectable.  You cut up the bread and the egg, the yolk runs into the gravy and the sliced bits of potato, and you fork it down between bites of bacon.  Wow!  It’s one of the best brunch dishes I’ve ever had.

Because the name of the place is Wolf’s Ridge Brewing, I had to try a beer, too.  I was tempted to get a flight of five beers — for only $8.00! — but I thought that might be too much for 1 p.m. on Saturday, so I settled on a glass of Harvest Wheat.  It was a bit darker than many wheat beers but crisp, clean, and a perfect complement to the entree.  Toad and Wheat go together like birds of a feather.

It’s great to have another downtown brunch option, and I was glad to see that more than a few tables and spots at the bar were filled on a pretty Saturday afternoon.  If you’re in the mood for brunch in Columbus, Wolf’s Ridge fills the bill.