Starbucks is embroiled in protests in Philadelphia due to an incident in one of its stores.  As CNN reports it, two African-American men initially initially asked to use the restroom inside the store “but were told the cafe’s bathrooms were for customers only. They then occupied a table without making a purchase, which many observers have noted is a common occurrence at the franchise’s locations.  A manager called police after the men declined to leave the premises because, they said, they were waiting for an acquaintance.”  Police then took the men out of the building, and the men were detained.

The incident has provoked outrage and resulted in a sit-in, other protests, and lots of criticism of Starbucks, and the manager who called the police is no longer working at the location in question.  Starbucks CEO has apologized, and Starbucks has announced that every one of its 8,000 stores in the U.S. will close the afternoon of May 29 to “conduct racial-bias education geared toward preventing discrimination in our stores.” 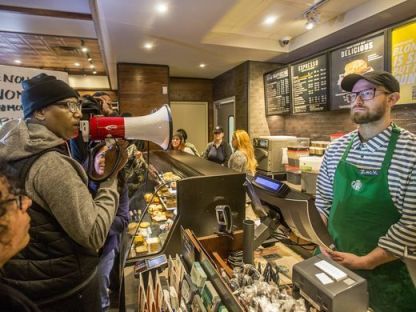 But this post isn’t about the unfortunate incident, the protests, or Starbucks’ response to the incident.  Instead, it’s about one picture taken during the protests, which appears at left — a photo of a Starbucks employee behind the counter at the store, wearing bright green Starbucks garb with “Zack” written on his apron, staring stolidly ahead while facing a protester with a bullhorn who is standing about three feet away.  That one picture, to me, aptly illustrates the lot of the working stiff.  Zack, the order-taking counter guy, isn’t the CEO of Starbucks, or the manager who made the decision to call the police, and we don’t know whether he was even in the store when the incident occurred.  But when things go south and the corporate crap hits the fan, it’s the little guys like Zack who show up for work and get sent out to face the music — and in this case, the bullhorn.

I’ve never had jobs where I had to deal with sit-ins and protesters using bullhorns, but I expect many of us have had jobs where we were the minimum-wage workers who had to deal with the red-faced customers who were angry about a decision we didn’t make.  And if you’ve had such a job, you suspect you know exactly what Zack was thinking at the moment the above photo was taken:  he’s thinking that the pay he’s getting just isn’t worth it, he’s wondering how long it is until his shift ends, and he’s trying to get to his mental happy place.  We’ve all been there.

And it also makes you wonder:  wouldn’t it be interesting to see how CEOs and high-level executives would deal with the bullhorn scenario?