The National Hockey League playoffs are underway.  The Columbus Blue Jackets had an up-and-down season and were one of the last teams to clinch a playoff spot.  Their reward was to draw the mighty Tampa Bay Lightning in the first round.  The Lightning had a record-setting season that saw them lose only 16 games, and in their playoff match-up with the CBJ they are prohibitive favorites. 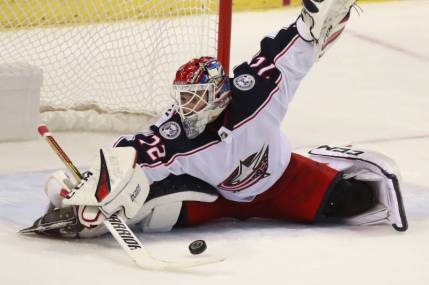 Playing at home in the first game of the playoff series last night, the Lightning jumped out to a 3-0 first period lead, making the prognostications of a four-game sweep look solid.  But somehow, goalie Sergei Bobrovsky made some improbable saves, the Blue Jackets kept their poise and started chipping away at the lead, and thanks to a three-goal third period and a last-minute power play score the CBJ — improbably — pulled out a victory on the road.

One road victory does not a series win make — as the Jackets learned last year, even two road wins doesn’t do that — but last night’s win allows CBJ fans to dream of an upset and has to give the team a shot of confidence.  Speaking for the city of Columbus, it would be nice to see the Blue Jackets, who have never won a playoff series in their history, advance to the second round.  For now, though, we’ll just settle for the general aura of good feeling that descends upon a town when its team gets a big win.  I expect there will be a lot of happy faces around downtown Columbus today.