I can’t say that I was shocked by Urban Meyer’s announcement today that he is retiring as the head football coach at The Ohio State University.  There have been too many news stories — and way too much speculation — about his health issues to make the decision a true surprise.  And I can’t say that I regret his decision, either.  He obviously needs to put his family, and his health, first. 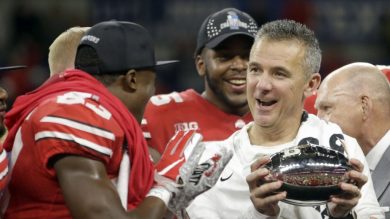 I’d like to thank Coach Meyer for his hard work at a very demanding, and at times thankless, job.  He’s provided some great moments for the millions of members of Buckeye Nation.  We won’t forget his perfect, 7-0 record against That Team Up North, and I’ll never forget the Buckeyes’ dominant performance in Dallas when they brought home a national championship.  Coach Meyer brought the football program at The Ohio State University to a higher level than it has ever occupied before.

But Coach Meyer wasn’t just about wins and losses.  He has been, first and foremost, a coach.  Anyone who’s ever been coached, or has ever tried to coach others, knows how difficult it can be.  Coaches are motivators, teachers, mentors, supporters, challengers, and a mixture of a bunch of other important characteristics and roles.  Good coaches can mold young people and make them better, and great coaches know when a player could use a hug — and when a player needs a kick in the butt instead.

Urban Meyer is a great coach by anyone’s measure.  His record establishes that beyond any rational argument.  But if you really want to know what kind of coach he was, pay attention to what his former players say about him.  Their tributes make it clear that he has been a influential figure for many young men who appreciated his guidance and learned from his teaching and his example.

Some people hate Coach Meyer and have long been eager to malign him.  I suspect that much of that ugliness is due to resentment about his astounding success.  But if you really want to know what kind of figure he has been at The Ohio State University, you should listen to the players.  They’ll tell you in no uncertain terms what kind of coach, and person, Urban Meyer really is.

Good luck to you, Coach Meyer, and Godspeed!