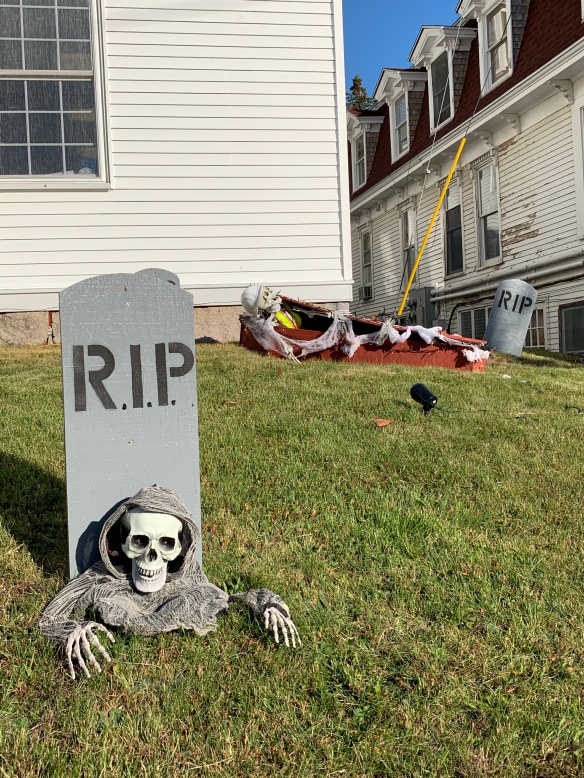 Happy Halloween to all the ghosts, ghouls, and goblins out there!

Tonight is trick or treat night in Columbus, too.  That means we’ll need to lay in a sufficient supply of Halloween candy to distribute to any kids who might come knocking, because you obviously don’t want to get caught short.  Then we’ll eat most of the candy ourselves, and after we reach an appropriate level of disgust at our consumption we’ll take the rest of it into the office and leave it next to the coffee station for everyone to gorge on.

Loosen the belts, everyone!  The two-month holiday candy, pie, and all things sweet binge period is about to begin! 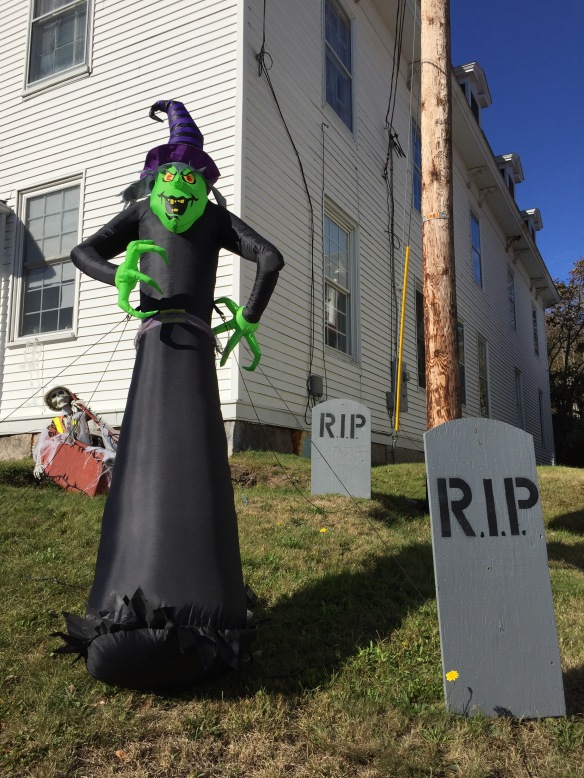 All Hallowed Eve today is here

A dreaded day of horror and fear.

Our wish for you this dark, dank night

Is to make it through without a fright.

One way to ensure you feel just dandy:

On the day after Trick-or-Treat night — that is, today — you can always count on finding Halloween candy by the office coffee station. 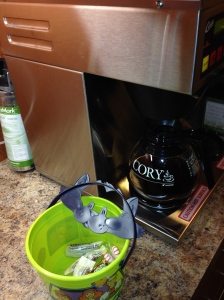 And all of us know, too, exactly how the internal spousal conversation that produced the candy cornucopia went.  “We bought too much candy, again.”  “I don’t want it around the house — I’ll just eat it.”  “Take it to the office and get rid of it!”  And across America, from sea to shining sea, huge amounts of leftover Halloween candy was tastefully displayed by the office coffee pot and then gobbled down, surreptitiously, by legions of famished co-workers.  Watch out!  If you’re not quick on your feet, you might miss out — or lose a hand reaching for one of the coveted pieces of chocolate goodness.

On our floor, I think we went though four different collections of leftover Halloween candy that included Butterfingers, Reese’s Cups, Whoppers, and other high-end chocolate confections.  I particularly liked this bat-themed, Scooby Doo character bowl, which perhaps lasted for five minutes before being emptied. 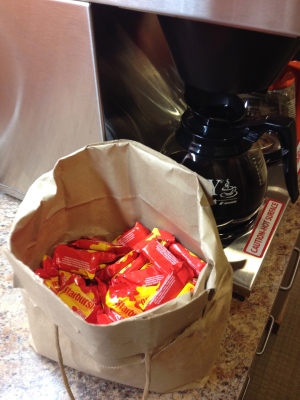 On Beggars’ Night, we had our customary basket of multiple candy options to offer trick-or-treaters.  Only the youngest and most inexperienced ghosts and goblins grabbed Starbursts.  Every other Halloweener dug furiously through the contents of the basket, like a dog clawing the ground to uncover a bone, in a desperate attempt to find Butterfingers, Reese’s minis, or even Skittles.  When the last trick-or-treater had rung the doorbell, taken a sad look at what was left in the basket, and departed with a painful sigh, we were left with enough Starbursts to float a small battleship.

We didn’t want them around the house, obviously.  No problem! I thought.  I’ll just take them to the office, plop them next to the coffee station on our floor, and the perpetually hungry denizens of the fifth floor would feel the urge of their sweet tooth and consume all of the candy in the blink of an eye.  Donuts, other baked goods, and anything with chocolate have been known to disappear faster than the speed of light, and occasionally there are tense standoffs as secretaries, paralegals, and attorneys eye the last brownie or piece of birthday cake.  So I put the Starburst in a bag, took it to work, and left it to be rapidly consumed.

Imagine my surprise, then, when I found this half-full bag of Starburst when I was leaving for the day at 6 p.m. tonight.  It is an unheard-of development that speaks volumes about the quality of the candy.  So I decided to conduct the crucial acid test and leave the bag for the overnight cleaning crew to enjoy.  If any Starburst are left tomorrow morning, it can only mean one thing:  Starburst candy truly sucks.

We didn’t have many trick-or-treaters this year.  It’s cold and rainy here in New Albany, and the crappy weather caused the Beggars’ Night kids to keep their neighborhood prowling to a minimum. 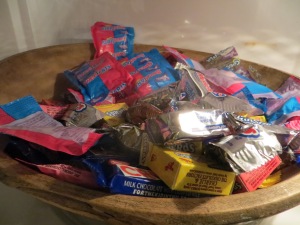 As a result, it’s become obvious that we are grossly overstocked with candy.  You almost wish that a bunch of 16-year-olds who aren’t wearing Halloween costumes would come by, so we could just dump the bowl of leftover candy into their pillow sacks.  The alternative — to keep the candy around the house — just means that it will be consumed by 50-year-olds with minimal metabolisms.  If we keep all of this candy around and eat it ourselves, we’ll soon find ourselves in the Chris Christie category.

Fortunately, there is a solution.  I work in a white-collar office environment.  As anyone who works in an office knows, if you put candy out by the coffee station, it will be gone in a nanosecond.  In fact, I’m convinced that a viable solution to the nuclear waste disposal problem is to cover the radioactive debris in chocolate and put it next to the Bunn coffee brewer at our firm.  That’s where this candy will be headed tomorrow — if Kish and I can avoid the temptation until then.

Next Monday is Beggars’ Night in New Albany.  That means we soon will have to make the high pressure trick-or-treat candy selection decisions that will determine our Halloween cred with the neighborhood kids until next October.  Anybody who once was a kid understands this.  The people in a house can carve a bunch of jack o’ lanterns, dress in a vampire suit, and broadcast scary music, but if their candy selections suck, they inevitably do, too.

There are two crucial decision points for the Halloween candy shopper — type of candy, and volume.  Here’s a good rule of thumb on candies to avoid if you want your house to be respected in the ‘hood:  don’t buy anything that appeared at the office coffee station the morning after Beggars’ Night last year.  That means, in short, that you shouldn’t buy Jolly Ranchers, SweeTarts, or any kind of “healthy candy.”  I also think suckers should be avoided, but that is primarily because our grandmother often terrorized UJ and me with “cautionary” stories about awful disasters that could befall innocent children.  One of the stories was about a sweet-faced child who was running with a sucker in her mouth, tripped, fell face first, and had the white sucker stem smash through the roof of her mouth and impale her brain.  I’m pretty sure Grandma used the phrase “doctors say she was dead as soon as she hit the floor” in recounting this horrible tale.  (You’ve been warned!)

The volume aspect of the candy purchase decision often is ignored by over-confident souls who believe they can buy a bag of “fun-sized” Snickers, Milky Way, and Three Musketeers bars and be done with it.  The volume issue poses its own hazards, however.  Any house that runs out of candy and turns out the porch lights at mid-point on Beggars’ Night is by definition a loser house.  So, you don’t want to run out — but at the same time you don’t want to be sitting in your house come 8 p.m. listening to the siren’s song of irresistible Reese’s Cups.  At our house, we typically experience peaks and valleys in candy distribution.  We start with full bowls and boldly encourage the early arriving kids to take multiple pieces, then panic after the early rush and turn into misers who harangue kids who try to sneak an extra piece — but then by the end of the night we’re basically hurling candy out the door at any random passing kid in order to get rid of the stuff.

The next morning, it’s time to take the Jolly Ranchers to our respective office coffee stations.