It’s a bit of a downer on a Friday evening, but this article about the obesity epidemic in the world is an exceptional read.  Written by an Australian doctor, it is a stunning, deeply disturbing description of how the modern world is encouraging people to eat themselves to death.  It’s long, but you should read every word . . . because the world’s weight problem deserves our attention.

It’s quite extraordinary, when you think about it:  a world that produces processed “food” that provides little nutritional value but lots of caloric content, marketing campaigns that encourage people to believe that consuming a hamburger is one of the greatest  achievements a human could aspire to, and lonely people who are willing to eat, and eat, and eat to the point where they can’t move without assistance or be transported without special vehicles and need special medical treatment for their weight-related afflictions.   What has happened to our culture that so many people have consumed to the point that they are at such a state, and can’t help themselves even when they know their appetites are the cause of their problems?

To be sure, those are just the truly excessive cases . . . yet I seem to see more and more kids who seem to be morbidly obese, and inactive.  Is this our future?  Is the hot personal care product of the near future some kind of skin cream that prevents chafing between those rolls of flab, or a special mirror apparatus that allows you to make sure that you don’t have those pesky open sores on your feet?

Why are people doing this to themselves?  It is a question that we really need to answer.

If you’ve lived in Upper Arlington, Ohio at any time since 1955, you’ve probably been to the Chef-O-Nette.  It’s one of those ageless, unchanging places that make you hope that maybe you haven’t changed much, either. 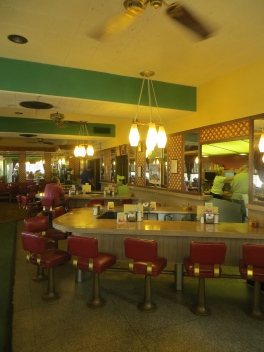 I first went to the Chef-O-Nette in the early ’70s, right after our family first moved to Upper Arlington.  It looked pretty much the same as it does now, with the ’50s lighting fixtures and the bolted down, rotating stools and the sunburst clock.  I’m guessing that the look of the place in the early ’70s was pretty much the same as it looked when it first opened in 1955, and established itself as the anchor at one end of the Tremont Shopping Center.  It hasn’t changed, and no one really wants it to change.

The menu hasn’t changed much, either, in the 40 years since I first visited the Chef-O-Nette.  That’s a good thing, too.  There are still the same burgers and diner food and milkshakes and french fries and hangover sandwich.  For all I know, it also may have the same ageless waitresses who first served me when I was a student at Upper Arlington High School, 40 years ago.

The Chef-O-Nette is one of those places that make a suburb into a community.  You see the same people there, and that’s a comfortable feeling.  It’s a good place to meet a friend for a cup of coffee or to have some hot chocolate after sledding at the OSU golf course.  When Richard and Kish and I went there for lunch yesterday, it was like slipping on an old slipper that fits like a glove.

I’m up in Cleveland for meetings today, as I look out my window I see what looks like the scene of a terrible traffic accident, with a car flipped on its roof and onlookers gathered around. 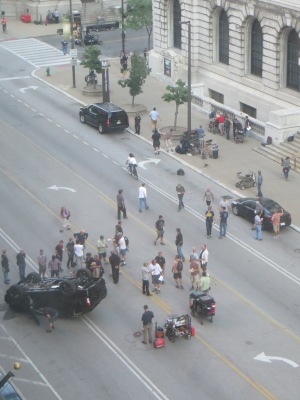 Fortunately, it’s not an accident scene, it’s just on-location shooting for Captain America:  The Winter Soldier, which is filming in Cleveland this week.  That film is the latest action thriller to be shot along the shores of Lake Erie, where some of the street scenes for The Avengers were filmed.

I don’t want to give away any spoilers, but I’m guessing that someone in Captain America is going to get into a car accident at some point during the movie.

As a visitor to the city, it’s interesting for me to watch the careful prep work for the scene.  You begin to dimly understand the jobs of the key grips, second unit directors, and other curious titles that scroll by in the credits at the end of films.  First the overturned car gets placed, then some kind of light barrier is put into position, then cameras are adjusted and moved, then electrical cables are strung out.  There are dozens of people involved in the exercise.

For Clevelanders, however, this filming is a love-hate thing.  They like the abstract notion of big-budget movies being shot in Cleveland.  It’s cool, and it makes their city seem cool, and they know that it brings jobs and publicity and money to their fair city, all of which are good things.

But Clevelanders are, at bottom, practical Midwesterners.  Once filming begins the novelty wears off and the reality of closing major freeways and thoroughfares sinks in.  This traffic accident scene is being shot in front of the Cleveland Public Library on blocked-off Superior Avenue — which would otherwise be bustling with cars and buses full of people going to work.  Today, they’ve had to make alternative arrangements.

Today I saw an alarming warning sign.  It appeared, of all places, on the metal lid of one of those rolling cloth towels you find in some older restrooms, and I saw it as I was drying my hands. 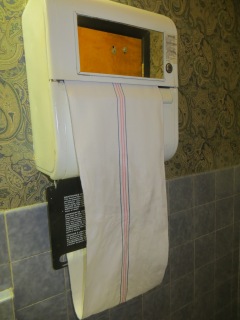 What were the warnings?  First:  “Use only to dry hands and face.”  Ewww!  I never considered it could be used for other drying purposes, or washing purposes.  I must admit that that warning made me eye the visible cloth toweling suspiciously and wish that I had dried my hands with toilet paper.

Second:  “Do not hang from towel.”  Check.  Say, is that warning really necessary?  In the history of Anglo-Saxon jurisprudence, has there ever been an incident of a tort claim caused by failure to warn not to hang from a cloth towel dispenser?

And third:  “Intentional misuse can be harmful or fatal.”  Harmful, okay.  Fool around with the towel, slip on a wet floor, dislocate something.  But fatal?  How?  Hanging?  Choking?

The sign didn’t say, and left all my questions unanswered.

The United Nations Human Rights Council is considering the topic of killer robots — preprogrammed killing machines that operate autonomously on the battlefield.

Although no such devices have been deployed to date, they reportedly are in development.  The UN Council is expected to call for a moratorium on their development so that the ethics of their use can be debated.  (Good luck with that one!  If dictators or “rebels” fighting for control of a country could get their hands on such a weapon, does anyone think for a moment that a moratorium imposed by some powerless UN Council in Geneva would stop them?  But, I digress.)  The argument is that killer robots raise “serious moral questions about how we wage war” and blur the line in the “traditional approach” of a “warrior” and a “weapon.”

This kind of abstract, clinical analysis of where war-making technology has taken us makes me scratch my head.  Romantic notions of a “warrior” and a “weapon” locked in some kind of single-combat situation don’t seem to have a lot to do with modern warfare.  Technological advances not only have made fighting more lethal — David and his slingshot wouldn’t stand much of a chance against a guy with a flamethrower — but also have increasingly divorced the immediacy of death and its consequences from the decision-maker.  Whether it is missiles, or drones, or roadside bombs that kill indiscriminately, we’ve already moved far from the warrior/weapon model.

Killer robots are just the inevitable next step.  All we can hope for is that their developers and deployers have seen enough science fiction to worry about Skynet and giving birth to the Matrix, and know that they better be sure that the soulless robot killers they unleash aren’t capable of turning on their creators.

Conservative favorite Michele Bachmann, a Representative from Minnesota, has announced that she won’t seek reelection.

How quickly the wheel can turn!  In the space of two years, Bachmann goes from running for President, to being an also-ran for President, to being investigated for campaign spending issues, and now to deciding that she won’t seek another term in Congress.  She says her decision not to run again has nothing to do with such issues, and that she will continue to be a leading voice for conservative causes.

We can take her decision to not seek reelection at face value, and concede that it has nothing to do with any of the issues surrounding her campaign.  However, we also can recognize that everything took a turn for the worse once Bachmann was photographed eating a corn dog at some summer political event.  She blindly ignored arguably the best political advice ever offered:  never be photographed eating a corn dog.  And once she did it, it all went to hell.

The Curse of the Corn Dog strikes again!

I hurt my paw.  I don’t know how it happened, but it hurts.  Not too much, though.  I can handle it.

I walk a little funny, but I don’t think anyone knows there is something wrong with my paw.  That’s good!  I don’t want anyone to think I can’t still do my duty as part of the pack.

I can still guard the Leader and keep her company.  I can still keep an eye on what’s going on outside.  And I can still eat, too.  If I couldn’t eat, it would be a real problem!

I’m happy this morning because I got a special treat.  I got to walk with the Leader around our place, but Kasey had to take a long boring walk with the Old Boring Guy.  Sorry about that, Kasey!  Today must be my lucky day!