Yesterday former President George W. Bush returned, briefly, to the national stage.  He was campaigning for his brother, Jeb Bush, who is hanging on for dear life and hoping to make a good showing in the South Carolina Republican primary.

According to press reports, the former President gave a short speech that endorsed his brother and described some of the qualities, like integrity and judgment and character, that he believes are needed in a good President — implicitly drawing a contrast with the blustery bombast of Donald Trump, without mentioning Trump or any other Republican candidate by name.   “W” also recounted some memories from his former campaigns in South Carolina and added some of his trademark self-deprecating humor. 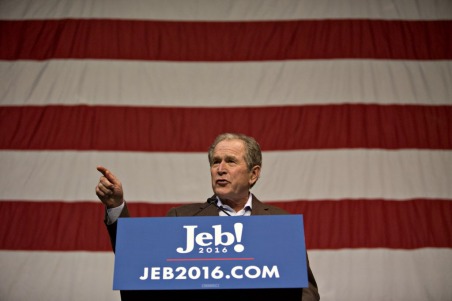 It was a bit jarring to see news reports of George W. Bush at the podium.  I hadn’t seen him for a while, and of course he looked older, and thinner.  Since he left office seven years ago, former President Bush has consciously avoided the public eye and maintained a pretty consistent non-partisan, apolitical tone.  His speech yesterday sounds like more of what we’ve come to expect from him in his post-presidential years.  He was there to support and help his brother, but he did it without attacking other candidates by name or, for that matter, mentioning President Obama or criticizing the Obama administration.

George W. Bush remains a figure to be mocked and reviled among some on the left side of the political spectrum; seven years later, he’s still blamed by many, inside the Obama administration and out, for virtually all of our current problems.  Now Donald Trump has joined in, by repeating the debunked conspiratorial theories that the Bush administration lied about weapons of mass destruction in Iraq to maneuver us into an unnecessary war and ignored clear intelligence that America would be attacked on 9/11.

Through it all, former President Bush has publicly remained above the fray, no doubt believing that, having served in the nation’s highest office, former Presidents shouldn’t engage in rancorous partisan politics or bash their successor on talk shows.  It’s an old school approach that speaks of personal humility and properly recognizes the dignity of the presidency.  His ego obviously doesn’t compel him to stay in the media spotlight.  Instead, he’s taken to painting, he’s written a book about his Dad, former President George H.W. Bush, and he’s focused on charitable and humanitarian efforts.

Yesterday, George W. Bush listed some of the qualities we want in our President.  I think the former President’s personal conduct since he left office illustrates those qualities — and draws a pretty sharp contrast with the vulgar, egotistical, limelight-loving loudmouth who currently is leading in the polls.

Today the director of the Secret Service, Julia Pierson, submitted her resignation.  She did so after being ripped by Congressmen of both parties for a series of appalling security lapses by the agency charged with protecting the President, including most recently the disclosure that the Secret Service had somehow — astonishingly — allowed the President to get on the elevator with an armed man.

Pierson said she resigned because it was obvious that Congress had lost confidence in her ability to run the agency — and she was right.  I can’t defend her management of the Secret Service, but I can applaud her decision to do the honorable thing and resign.

Pierson’s candor and approach is refreshing and, unfortunately, all too rare in Washington, D.C. these days, where embattled agency heads seem to routinely try to batten down the hatches and blame somebody else for the failings of their agencies.  Kathleen Sebelius presided over one of the worst, most expensive debacles in federal government history during the rollout of the healthcare.gov website, and she hung around for months afterward.  Who has resigned to atone for the obvious failings in security along the Mexican border, for allowing a whistleblower to spirit away a huge cache of top-secret government documents, for allowing the IRS to target groups because of their political orientation, or for countless other disasters?  Has anyone?

Pierson’s resignation reminds us that the people serving in government used to serve at the pleasure of the President and Congress and were decent enough to take the blame and submit their resignations when screw-ups occur on their watch.  Julia Pierson, at least, understood her proper role and had the class to do the right thing — but such an act of personal accountability is incredibly rare.  What does that tell you about the people who now serve in our government and don’t seem to be accountable to anyone? 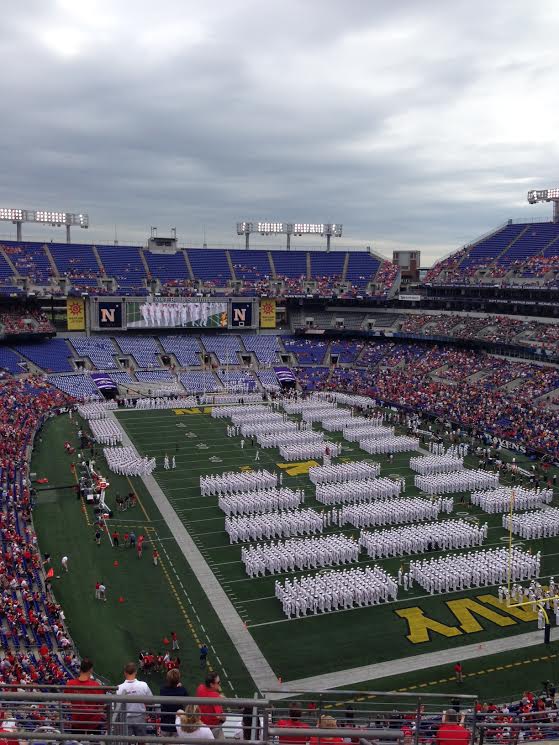 Ohio State won its first game today, beating Navy 34-17.  It was an excellent game, with Navy ripping off huge runs and gashing Ohio State with its great running game, and Ohio State responding with some big plays.  Ohio State’s redshirt freshman quarterback made a bad play but made some good plays and now has a win under his belt, and the Ohio State defense bounced back from some bad breakdowns to stop Navy at the end and allow the Buckeyes to come away with the win.

But I don’t really want to write about the football right now.  Instead, I’d rather write about the coolness of playing the United States Naval Academy, and the great displays of sportsmanship by college athletes from both schools before, during, and after the game.  This was a game where there wasn’t any chippiness, or cheap penalties, or showboating for the cameras.  Both teams played hard, but fair and within the rules.  The Ohio State players obviously had great respect for Navy, and I think the Midshipmen felt likewise.  When the teams honored each other by listening respectfully to both alma maters at the end of the game, it was a fitting and moving end to a great exhibition.

Don’t get me wrong — I’m glad that Ohio State won.  But I also want to point out how refreshing it is to see college athletes behave with class, and dignity, in a manner that reflects well on both institutions.  This is what college sports really should be about.

Ohio State fans used to make fun of Notre Dame for playing the service academies every year; we said it was just a way for the Fighting Irish to pad their win totals against overmatched opponents.  After this game against Navy and the game in 2009 that I was privileged to attend in Ohio Stadium, we know differently.  Even though this game with Navy was a nail-biter, and even though the Buckeyes’ victory was a hard-fought one, I’m hoping that the Ohio State Athletic Department schedules Navy again, and sees whether Army and Air Force might fit on future schedules.  Playing them is a way to honor their service to our country and their role in securing our freedoms.  When you hear the National Anthem on the same field with young men who soon will be placing themselves in harm’s way for the good of the country, it just has a different feel.  I admire those Navy players, and I’ll be rooting for them to win every other game they play this year.

Finally, thanks to Mike N for the great photos.  The photo at the top of this post, of the rows of assembled, white-clad Midshipmen on the field prior to the game, should give us all chills, and the photo below of Carmen Ohio being played while both teams stand respectfully, will remind us of how college sports can be great. 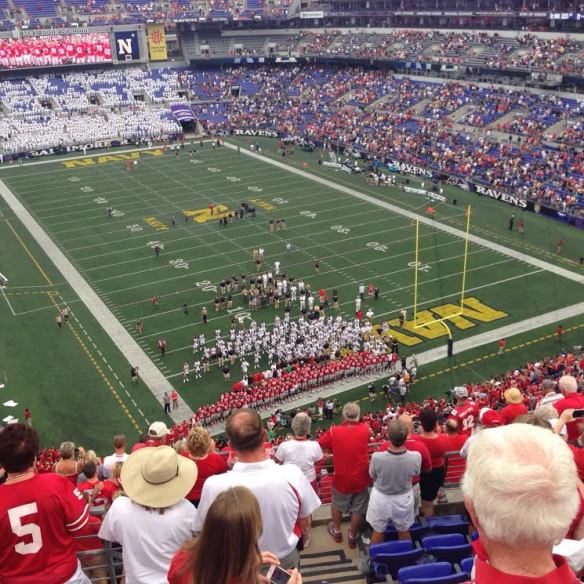 I didn’t pay any attention to the Casey Anthony trial, although I was dimly aware that cable news shows were paying huge amounts of attention to the trial of a young woman accused of killing her two-year-old daughter.

In the wake of the jury verdict declaring Anthony not guilty of the crime, the media focus has become even more intense, and stories about the case seem to be unavoidable.  Jurors are talking about how they reached their verdict.  One of Anthony’s lawyers makes a vulgar gesture at members of the news media, whom Anthony’s counsel believe have engaged in character assassination.  Other observers criticize the jury for what they consider to be a bad decision.

Murder trials happen every day in this country.  Why do some trials — like the Casey Anthony trial, or the Menendez brothers trial, or any of the other criminal trials that people have obsessed about in this era of cable-TV sensationalism — command so much attention, whereas others don’t?

Right now, in Cleveland, a man accused in the deaths of 11 women is on trial.  How many people in America have even heard of Anthony Sowell, the accused killer, or the poor women he is alleged to have killed, many of whom apparently had substance abuse problems and vanished without much attention being paid to their disappearance?  Has Sowell’s trial received even a tiny fraction of the national attention that was paid to the Casey Anthony trial?

How can the death of one little girl, however tragic, command so much more attention than the horrific stories of the dead women that are being told at the Sowell trial?  Which of the two trials is likely to have more to teach us about our society?  And how much of the enormous disparity in attention paid to these two cases is due to race, class, and the perceived photogenic qualities of the victims and the defendants?