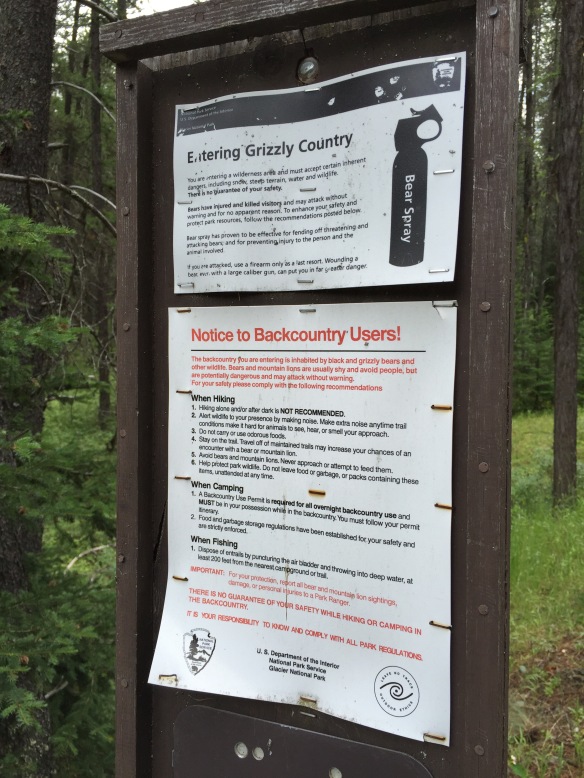 Montana is bear country, with a hardy population of grizzlies and black bears roaming through the wilderness.  Signs at trail heads remind you of the risk that you might encounter a bear.  The risk was made manifest a few days before we arrived, when an experienced outdoorsman on a mountain bike literally ran headlong into a grizzly after turning a corner on a trail and was fatally mauled.

We don’t want to mess with bears, so we’ve stayed on the popular trails, tried to make a lot of noise to warn the bears away, and kept our eyes open.  So far, we’ve had two bear sightings, but no direct interaction — fortunately.

We’ve been trekking through areas of the Pisgah National Forest, enjoying some beautiful streams and waterfalls, cool air and chirping birds. So far, we haven’t seen one of the other natural wonders of this area — bears.

The Asheville area is black bear country, and the Pisgah National Forest is where they live. It’s one of those areas that is wilderness — in the sense that no houses are in sight — but it’s regularly visited by campers, hikers, anglers, birders, and tourist who drive down the Blue Ridge Parkway. Bears often see humans, and are known to prowl suburban neighborhoods at night, rooting through garbage and looking for food. The bears are accustomed to people and have lost their fear of them. That’s not a good thing, because an emboldened bear is more likely to charge — and we don’t want that.

The trail heads here feature posted warnings about bears that seem ironically hilarious to me. Don’t approach a bear? Give a bear in the distance wide berth? Hey, thanks for those useful tips! But some people are idiots, and expect any bears they see to be like animals in a petting zoo. They’ll approach them and even try to feed them and take a selfie while doing so. I’m not sure that posting notices will penetrate the cluelessness of such people — but you’ve got to try something, I suppose.

On our hikes I’ve tried to stay alert for signs of bears. If I see one, I’ll gladly turn and head carefully in the opposite direction.

Today’s story about exotic animals who were set free from a privately owned farm near Zanesville, Ohio and then had to be shot by Muskingum County sheriff’s deputies is horrific on many levels.

For those who aren’t familiar with this awful story, a man named Terry Thompson kept dozens of exotic animals on his farm near Zanesville — about 50 miles from here.  His stock included male and female lions, Bengal tigers, grizzly bears, black bears, mountain lions, wolves, and a baboon and a monkey.  Last night, Thompson apparently unlocked all of the animal pens, cut wires that restrained the animals, and then shot and killed himself.  The animals escaped into the surrounding area, terrorizing nearby neighborhoods, and had to be hunted down and killed by sheriff’s deputies.  It’s terrible that so many innocent, magnificent creatures had to be killed — but public safety had to take priority, and you don’t mess around with grizzlies or Bengal tigers.

Now that the danger has passed, it’s time to ask questions.  Ohio’s laws governing private ownership of exotic animals are apparently very liberal.  Why?  Even if allowing people to own or breed certain animals should be permitted under certain circumstances, isn’t it an obvious risk to public safety to have one man keep dozens of dangerous animals?  What was done to make sure that Thompson was qualified to serve as a proper caretaker and that the animals were being kept with appropriate security?   It’s mind-boggling to think that Thompson was allowed to keep more than 50 non-native, wild animals.  It’s even more mind-boggling that, under Ohio law, the only thing between those creatures and the people of the surrounding countryside was the rationality of one man who thought it was reasonable to keep more than 50 dangerous creatures on his property in the first place.

Dolores, the bald bear at the Leipzig zoo

Here’s a picture if you don’t believe me.  These particular bears are in the Leipzig zoo, and they have lost their fur.  Experts have no explanation of what happened so far.